Choetech 33W USB-C Car Charger, yeah a car charger that has a USB-C socket on it. It’s the first time I’ve seen one but how does it perform? Read on and find out.

All the Cheotech boxes really are so similar to each other. So, box open and there is the charger thingy. I can’t say I use these things much myself but a great may people do especially if you are a road warrior which can really hammer a battery. Mobile reception in the UK can be random on motorways and if you’re zipping along at speed you are changing masts often which again is battery draining. So for those who spend half their lives driving you need to charge your bits and things in the car. This though is different in that it’s got one normal USB socket but it also has a USB type-C output. You know the sort that Apple are putting on their new laptops. It is the connector that should become the standard for anything that needs charging, phones, tablets and even laptops. So in the future it should become a very common cable output type.

Well, it’s a car USB charger and they all more or less look rather similar. Still it’s fairly nice looking, black glossy finish on it. When you plug it in it lights up blue too though taking pics in daylight you don’t really see the blue that well. Trying to take pics at night, well the camera wanted to use the flash or the pics just looked terrible. It had a pleasant little blue glow and what I rather like was that it wasn’t so much the indicator panel that glowed but the sockets. Yeah the sockets, so when it’s dark you can see where it is you’re aiming to stick the cable into. It looks a bit cool and it’s functional too, nice.

It works and it works quite well. Using my handy little amp / volt meter I plugged in my Nexus 5 and it pumped out a good and steady 5 volts and at 1 amp. So as far as I am concerned that is pretty good and it will charge your device quickly. Now if you have a device that can take more, it can pump it out. Looking at the spec at the back of the box it’s capable of 2.4 amps at 5 volts. 2 amps at 9 volts and lastly, 1.5 amps at 12 volts. You see it’s a QC3 compatible charger so it can really spit out a solid amount of power, you know they do call it a 33 watt output charger. Additionally the C type output with its USB-C and that can put out 3 amps at 5 volts. So all that basically means it’ll charge your stuff about as fast as they can take it and should be good for charging even your USB-C compatible laptop. I grant there aren’t too many of them around, yet. Overall its performance was great.

Coming in at £14 it’s not the cheapest car USB charger but it feels solid, it looks quality and is made by a brand that I would have a high degree of confidence in. I know you can get some for 2 quid off eBay but I’d be afraid they melt and fry the cars electronics. This I would trust and be happy to leave it plugged in all the time and not worry its going to set the car on fire. Plus it’s got QC3 and QC2 compatibility for super snappy charging and on top of that it’s got a futureproof USB-C socket on it. It should be something you can use for the foreseeable future without becoming obsolete.

It is a charger, chargers are not sexy. They are however a necessity of life. This would appear to be a good quality car changer and it’s got two key features that set it apart from the el cheapo things you can find. QC3 and QC2 compatibility for extra fast charging. Then it’s got a, not so useful right now, USB-C connector. That is without question the way connectors are going and while it isn’t yet a must have, come back in a couple of years and I bet it will be. Buying this car charger brings you that future proofing. Not just that but its power capability should allow it charge your new USB-C charging laptop. Again if you are a road warrior who travels tons for work keeping your laptop and your phone topped up isn’t a “bonus” it’s an absolute necessity.

So would I / should you buy one? Well yeah it’s a little bit more expensive than some others but it’s a nice quality and it’s got a relatively massive power output potential. I mean 33 watts is a lot for spitting out over USB. For devices that use USB that represents loads of power and that means very snappy charging. Therefore I can’t see any reason not to give it a great bit thumbs up. 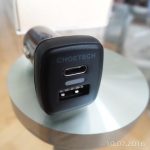