Another Choetech device for us to look at here and this time it’s the Choetech 10400mAh 2-Port USB Power Bank. Everyone needs more juice nowadays so let’s see how it performs.

It looks alright, it’s a power bank. It comes with a USB type C cable. A curious addition. Why is it curious you may ask? Well this is a bit of a different power bank, it has not one but two outputs. Okay so that isn’t that strange but what is, is that it has two inputs. Yes two inputs so you can charge it via micro USB or by lightning cable. So if you’re a mixed household, apple and android, or anything not apple really, then you can use either to charge it. That’s why it seems odd to have a USB-C cable, why bother including a cable at all? Still its looks cool.

While looks aren’t really a matter of import, well it doesn’t hurt to look nice does it. It looks alright, all black metal with a little bare aluminium edging. Ditto with the bare metal edging round the power button. Nothing super special but looks quite nice don’t you think?

The thing has a rated capacity of 10400mAh so it’s vast in comparison to your phone, though in comparison to other power banks it isn’t anything special. Well in terms of capacity anyway but it has a little trick up its sleeve. Remember that it has not one, but two outputs. That is a little bit special but that is more so is that one of the outputs is blue. Some of you will know that blue means USB type-C power levels. This socket, is QC3 compatible too. Of course it’s also compatible with QC2 so if you have a phone with either, this power bank should be able to charge your phone like lightning. On the bottom there is a list of the power outputs that it can do, including 3A/9V and 2A/12V. So lots of power, delivered fast which is handy if you’re just trying to get an a little quick emergency top up. It is a feature that I haven’t so far seen on any other power bank (there must be though right?) You can also use the handy lights on the front to give you an indication of the battery’s remaining capacity too.

Testing its actual power output with my little USB amp/volt meter thing I can see that different phones pulled different amounts. Still the Moto G 4G was pulling 1.3 amps at 5 volts and that speed it should charge pretty damn fast. In short I’ve been rather please with its performance as it feels every bit as quick to charge as my normal desktop, mains powered USB sockets manage. Yay!

If it was just going by its rated capacity, you can find cheaper but I don’t know of any other power bank that offers micro USB and lighting input options, I don’t really ever use lighting so it isn’t something I look for much but for a mixed house hold that’s got to be extra handy. Any charger you got lying about will charge it. Plus it’s got QC3 and QC2 output and I’ve not seen that elsewhere, that is well worth a bit extra as nothing is more annoying than having your phone plugged into a battery pack for ages, this’ll do much more snappy.

It is a power bank, so it’s not exactly something we have never seen before, but it does have a feature set that others just don’t. The dual input type is cool and so is the dual output. Then you add-on to it that one output socket is capable of super-fast charging if your phone supports it. If you need that bit of a top up then it being fast is great. Like the proverbial kettle, a watched phone never charges.

So should you/ would I get one? Well I can’t think of any reason not to really. It’s not the cheapest power bank but it’ll do things most won’t. The dual input options, if you use both then it’s got to be a really handy feature right? I couldn’t tell you the last time I saw a power bank with lightning in any way. Then the dual output but with super-fast charging. Again it’s not that you “need” it but when you’ve got it it’s so handy and it really hard to go back from. So sure, I really can’t see any reason why you wouldn’t grab one of these if you looking for a nice and highly versatile power bank. 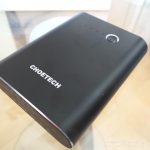