We first encountered ACWorldwide, creator of the licensed Star Wars Bluetooth speakers at the Gadget Show in 2016. Shortly thereafter we looked at the Stormtrooper variant, knowing there were options to come. We recently got our hands on the Darth Vadar variant. Yes it’s the same device, but it’s Darth Vadar! Darth Vadar!!! Let’s take a closer look.

If you’re after a more in depth review of this unit, head over to our Stormtrooper one as this is essentially the same unit, but with a different character aesthetic. Let’s get the burning question out of the way. Yes, this unit sounds like it has asthma, just like the real deal!

Let’s take a look in the box:

This unit is identical to that of the Stormtrooper variant, barring it’s Darth Vadar design which we’d definitely prefer was it not for the fingerprint-magnet properties of the glossy black plastic finish. It’s built wonderfully well however with a lot of detail in Vadar’s helmet, around the eyes and the grille – lovely! Afterall this is why somebody would buy this device over another audio unit; it’s purely the Star Wars design, so that has to be on point.

The base houses all the controls you might need with Bass up/down controls, dual function volume up/down and track forward/back control buttons, as well as a play/pause button which doubles as a call answer button, and finally an Aux mode for use with the 3.5mm audio cable and a Pairing button for the Bluetooth connectivity. There’s also an NFC position for quick pairing. No waiting for your phone to find the unit – just tap and play.

Audio wise we’re again into the “see previous review” territory, however the mids seem a little better on this unit. I’m unsure if the sound stage has been tweaked at all but there is a definite clarity in the mids that were not there in the Stormtrooper unit. Either way, you’ll be buying this unit more as a talking point or because you’re a huge Star Wars fan, and not because you want room filling audio. That said, there is acceptable output no matter the type of music you like listening to, and it does a decent job in a fairly large room in our testing.

That music can be played for some significant amount of time too as the unit doesn’t need to be plugged in constant for it to spit out tunes. The built-in 2200 mAh battery ran well for us for just over 4 hours which is within the 4-5 hours claimed by the documentation. Additionally, this unit seemed to be faster to charge than the Stormtrooper one. This was one of our downsides when we reviewed that unit, but we’re happy to report that this unit manages to fully charge in just over 2 hours which is a significant improvement.

We’ve loved our time with this unit and we can fully recommend it to anybody looking to have a themed room, or that simply wants to have more Star Wars in their lives. It might be a over £130 but if you feel the calling of the Dark side, we’re sure this won’t be an issue. It’s also a little cheaper than the Stormtrooper unit we reviewed due to price decreases. That’s good to see.

The slight note of caution is that this isn’t going to deliver rumbling bass, or cinematic audio. It does a good job with the dual 3W speakers it has and the 10W Sub performs on par. Nothing extraordinary, just good. The extraordinary is saved for the looks on the faces of those in the room the first time this unit pairs to a device. Take a deep breath….and breathe. 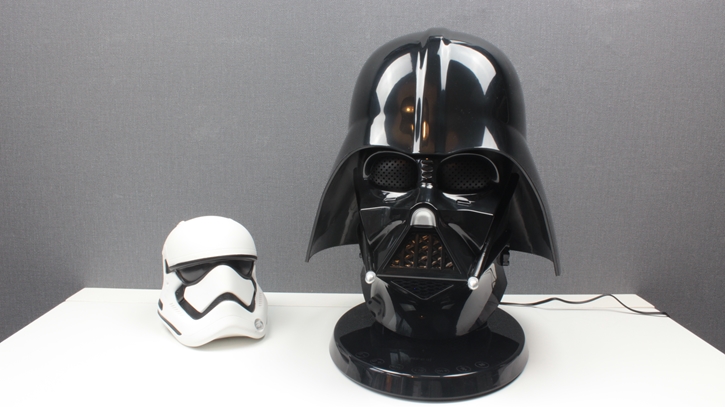