Another power bank? Yup! Another Blitzwolf product? Yup! So why this product? Well, the answer to that last one is really quite simple. The Blitzwolf BW-WP1 offers a 10000 mAh battery, in a portable form factor, with a stylish design as well as a nice to have feature; onboard Qi wireless charging. That’s why! Let’s take a look in our full review. 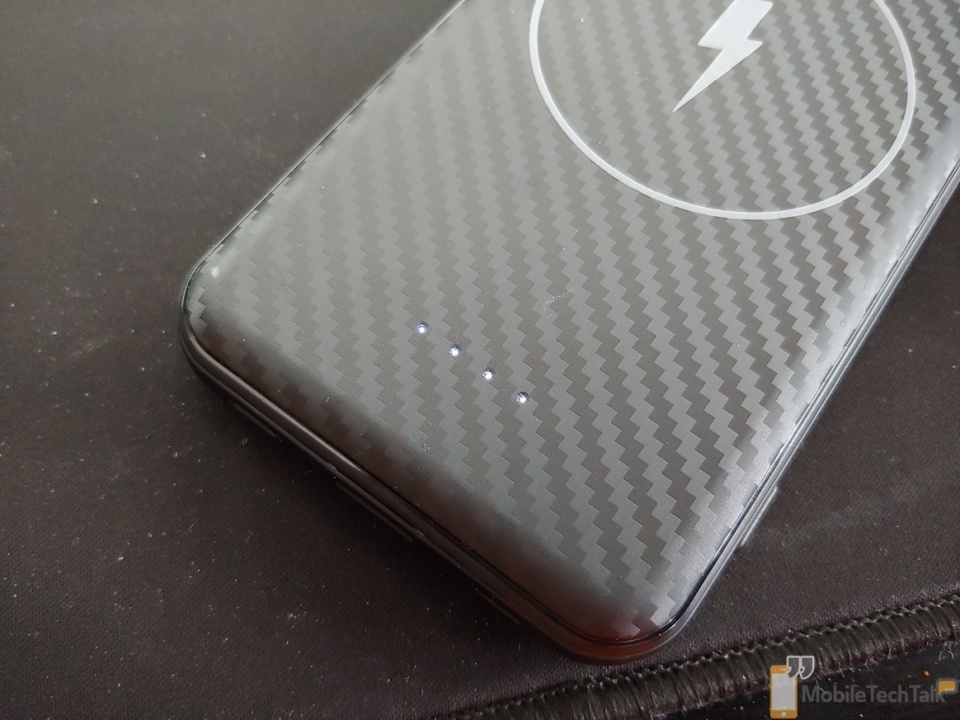 Power banks are everywhere and whilst we have covered quite a lot, we try and be a little more selective now. Does it have something unique? Is it a bargain-basement price? Does it have an exceedingly annoying strobe lighting effect on an LED flashlight that nobody asked for? Well, that last one is just me being facetious, but the others, well the truth is the Blitzwolf BW-WP1 actually delivers something I’m particularly interested in again now. Qi Wireless Charging. Since I opted for an out-of-left-field purchase of an LG G7 ThinQ (full review soon), I’ve been using my built-in desk-based Qi charging pad a lot. In fact, I’m yet to charge up the device using anything else. So, working with Blitzwolf recently gave me the opportunity to check out their on-the-go Qi charging solution, and here we are. Let’s check out the specifications first.

In the box you get a user guide, the power bank itself, and, rather annoyingly, a microUSB cable to charge the unit. We would have expected and prefered a Type-C cable in 2018.

The feel is a bit double-edged at first touch. First, the carbon fibre covering is lovely and the light bounces nicely from it, and it also keeps it relatively light in comparison to other power banks, but then you start to feel a bit of movement under the Qi wireless charging area, or a creak of some plastic at the edges, and the build quality can be called into question. That said, during this review and to date, we haven’t had any issues with anything falling apart, cracking, or any other issues. 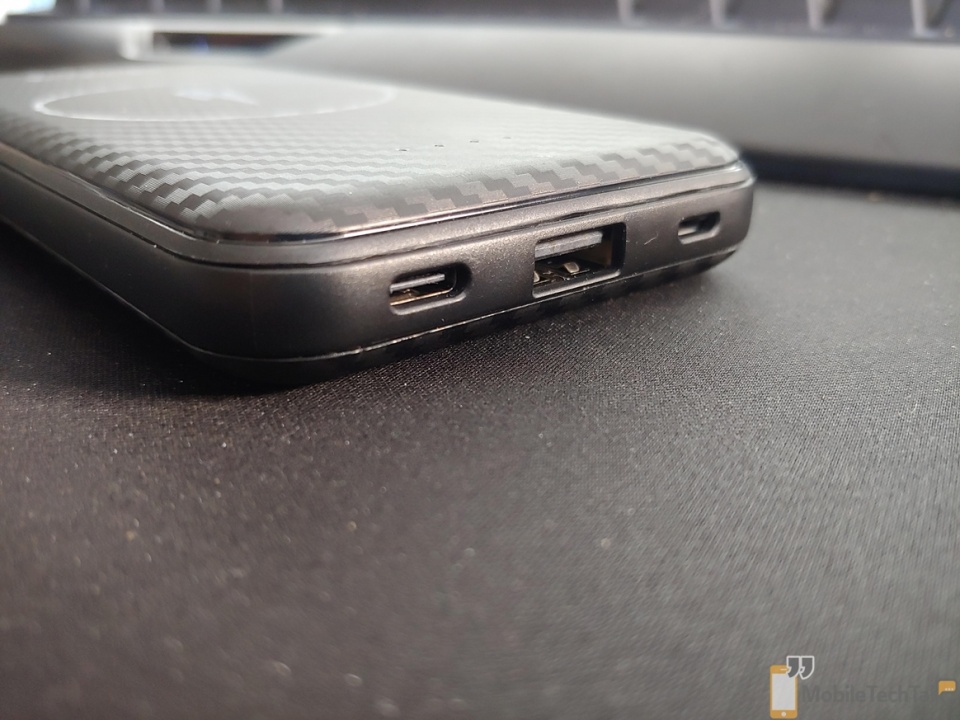 In terms of connectivity, there are 3 ports; a Type-C port capable of delivering up to 2.7A, a Type-A port with the same output capability, and a micro USB input which will charge the unit at 2A. Incidentally, the Type-C port will also double as an input and charge your unit faster than it’s Micro-USB counterpart.

Charging wirelessly will result in a paltry 1A, but then again, it’s a drip feed which might well be better for your battery depending on who you believe currently. Either way, Qi Wireless Charging is without a doubt a more convenient solution than carrying wires around, and it’s nice that this is included here. Of course, if you don’t have a Qi-enabled device, then you can stick to the regular ports and get some speedy charging; not any fast charging technology though. This is reserved for some of Blitzwolf’s other products, but the Blitzwolf BW-WP1 does deliver up to 2.7A which is still enough to get the job done. We’d have loved to have seen a Qualcomm solution here for fast charging.

Up top, you have some notification LEDs delivering a charge or battery remaining status, and we’ve found that this is a good indication of how much juice you have left. Some similarly priced units are often top-heavy, meaning that the LEDs hardly move until you get to an ‘ almost dead’ scenario at which point it promptly starts flashing the one remaining LED. Equally, we found the efficiency of this device slightly above that which it is marketed at. Blitzwolf quote a conversion (efficiency) rating of 81.6% whilst we managed to get close to 90% in our testing with a 3000 mAh smartphone device managing almost 3 full charges. That’s pretty impressive. 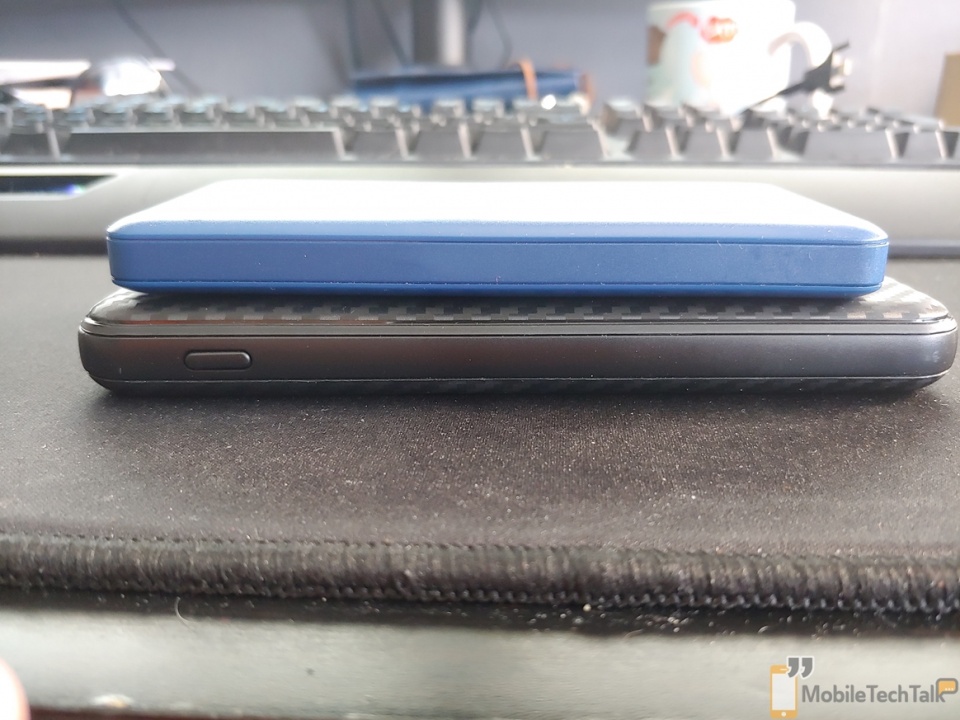 The Blitzwolf BW-WP1 offers not only a robust portable charging experience but the ability to leave some of your wires at home. The efficiency of the device is such that it should deal with a few recharges of even the most demanding phones, and let’s face it; it looks nice too. Whenever I grab a new phone my go to is either a dbrand carbon fibre skin or a case to match. The only material choice I prefer more is a ballistic nylon, but I digress.

If you’re on a trip for any length of time, however, you’re no doubt going to have to carry a cable around with you to charge the device up, so you’re only really saving that cable carry under certain circumstances. Equally, if you don’t have a Qi-enabled device, there is little to suggest this should be a power bank for you, as it’s missing some other key features. It doesn’t have any fast charging technology, which many other equally priced products do, and whilst it has a Type-C port, there is no USB Power Delivery included which means your shiny new laptop, that can be charged by USB-Type C, won’t be getting anything from the Blitzwolf BW-WP1.

That’s okay though as it’s sub-£30. IF these features are key to you then look elsewhere, but if you’re after a solid unit, with a few perks, the Blitzwolf BW-WP1 isn’t a bad option. You’re just going to have to deal with slower charging than you normally get from your AC adapter.