Like my wallets, I do like to have as much tech crammed into a desk-based product as possible. Monitors with built-in Quick Charge USB ports are a prime example. The Bestek LED Desk Lamp is a unit that not only did I need after breaking my last one (I was fiddling with monitors and down it went) but it has a few options that I was looking for in the price point. So let’s take a closer look shall we? As I mentioned, my last desk lamp (from Aukey – the review can be checked out here) has gone to the great desk in the sky, and I was on the look out for something else. Bestek hit me up and asked me to look at a few products, and this one was on the list. Sold!

See, I look for a product like this to do the simple things, sure, like light up the immediate area, but I want something a little more in 2017. This device hints at that, and at this price I don’t think I could have asked much more.

Aside from a multi-language user guide, you get the Lamp in the box, and the power adapter; nothing else. Interestingly the power adapter is a lovely braided black/red cable. High quality, albeit it’s hidden on my setup, but it was nice to see something not flimsy.

The device is glossy black plastic which isn’t the best material to keep clean (or take pictures of as you can see), but it is bulky and sturdy so I’m not too worried about it falling off my desk and dying! Despite its bulk, the Bestek LED lamp can be manipulated easily. The lower lamp arm can be swung through 60 degrees, with only 15 degrees past upright, but 45 degrees forward towards the desk. The upper arm can be adjusted 140 degrees, with the lower hinge rotating 90 degrees as well as the LED itself delivering 180 degrees rotation. Not too bad, albeit a 360 rotation, or 240 would be nice on the LED itself to illuminate above the lamp. Not a deal breaker though

Aside from the mode selection buttons on the main section of the stand, there is a single USB port capable of up to 2.4A charging, on the right hand side. The AC adapter is plugged in to the rear allowing you to hide any wires for a more minimalist look.

There’s a number of functions to be had once you turn this Bestek LED Desk Lamp on. Press and hold the touch sensitive “On” button and choose one of the modes to use; Reading, Study, Relaxing, or Sleep. We’ll take them in turn albeit they are relatively self-explanatory. If in doubt, read the manual. On top of those functions there’s also a “60min” mode which will turn off the light after, you guessed it, 60 minutes. Those modes can also be augmented with the custom brightness settings. Across the bottom of the glossy stand, under the mode selection buttons are a number of dots, starting with the power button. These allow you to cycle through 20%, 40%, 60%, 80% and 100% brightness, on any mode.

I can’t think of too much, at the price point of under £35, that I’d ask for here. Perhaps a different choice of material to stop fingerprints and dust catching, but there is a white version if the black is just too shiny for you. Perhaps I’d be asking for another USB port, or even a Type-C port to charge peripherals. Also, maybe a slight divot in the main stand to allow for pens, wallets, etc to be stored. If they wanted to up the price point, I’d be asking for that space to be used for a wireless Qi charging pad instead. I’d happily pay the extra for this.

Overall though, this is a sound offering and delivers more functionality than an average lamp, with a USB port, and brightness controls. You can’t ask for much more can you? 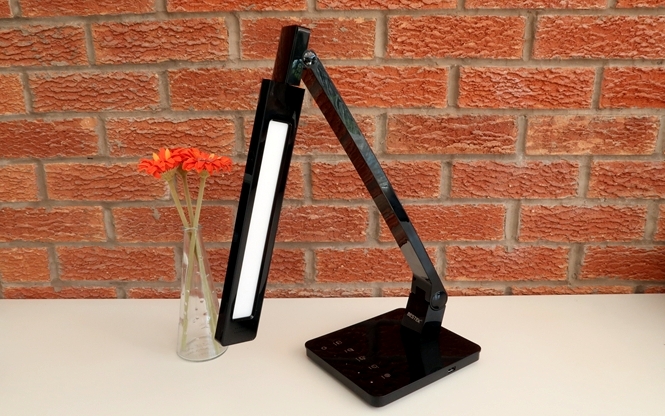