For anyone wishing to keep their devices juiced up, power banks have become something of a holy grail. Find the largest capacity in the smallest body, whilst looking good and providing the adequate utility required. Besiter have products that cover that entire spectrum, and today we’re reviewing the Besiter Lightning 4.

Firstly, a huge shout out to Kavson whom we met at The Gadget Show Live 2016, and have provided this unit for review. Not only are they a great bunch of people, but they have some really interesting products. We’ll be covering even more products from Besiter and beyond shortly, and check out the Kavson site!

The Besiter Lightning 4 is a 13,400 mAh capacity power bank with Quick Charge capability; something that has become ubiquitous within the smart device market over the last 12-18 months. This is the Quick Charge 2.0 variety, which makes it compatible with the likes of the Blackberry Priv (check out our review of that here), Nexus 6P, as well as the Samsung Galaxy S7 Edge. If you’re not quite up to speed (see what we did there?), Quick Charge technology essentially enables the increase of current draw from a traditional 5 volt USB supply therefore providing an increased charging time. The Besiter Lightning 4 unit comes with a Micro USB charging cable, and a surprisingly good quick start guide in the box. The unit itself has an authentic natural rosewood finish on the top, flanked by an aluminium surround and a glossy black varnished bottom. The bottom of the unit has a unique curvature which makes it feel really nice in the hand, but perhaps a little slippery on a flat surface. There’s no denying though, this looks as premium as it gets for power banks! That being said, it’s not a thin device. It’s quite a bit thicker than the average smartphone – probably around 2 to 3 times the size depending on the comparison device.

On one of the edges are the two USB output ports; one for 1 amp output and the other for 2.4 amp output. Nestled in-between is a micro USB charging port to ensure the device has the juice required to prolong the life of your devices when out in the field. Around to the left hand edge from the connectivity, there’s a power button which illuminates the 4 pinhole LEDs situated on the opposite edge which indicate the charge left within the unit.

We’ve reviewed many power banks here at MobileTechTalk. From small and light, to thin and futuristic, and even solar charged. The Besiter Lightning 4 is the most aesthetically pleasing we’ve seen by far. The Rosewood finish on the top with only subtle branding and the varnished glossy finish on the bottom are both gloriously premium. It’s equally hard-wearing too. During our review period this has been thrown in many a bag with gay abandon, and there is not a scratch on any other the finishes, including the aluminium surround.

The LED button has a nice clicky feel and sound to it so you’ll definitely know when you’re turning the unit on. Many power banks simply rely on connecting a USB cable to turn the unit on, but we still prefer more control. Another nice aspect is that if no charging commences within 5 seconds of turning the unit on, it simply goes into a sleep mode and turns itself off again. On the flip-side, quite literally, the blue LEDs are too small and dim to be seen in a lot of circumstances, unless up close and tilted to catch the light. This might be a design flaw in terms of their seating or it might simply be that stronger LEDs are required.

Its primary focus however is to power devices, not be eye candy. Thankfully it manages this relatively fundamental task with ease. Using an output monitor we can see our Nextbit Robin is charging at just over 2 amps (which we’d expect) and a standard Bluetooth speaker charges up nearer the 1 amp mark. It is worth noting that a Quick Charge 2.0 enabled device (or indeed higher) will draw more than 1 amp from the 1 amp port, but nowhere near the 2.4 amp of the larger output port. We suspect that the built in intelligent charge functionality is kicking in here on each port.

In a utopia the 13400 mAh batter would charge our Nextbit Robin’s 2680 mAh battery exactly 5 times. Thanks to some technicalities as well as energy wastage, that isn’t going to be the case, regardless of the power bank in use. The good news here however is that we did manage to charge out Robin’s battery to full 4 complete times with still some part of “1 LED” light remaining. That’s over 80% efficiency, and isn’t too shabby at all for a power bank of this capacity.

Devices that offer Quick Charging technologies are almost required purchases for those with smart devices that utilise these standards. Quick Charge 3.0 is on the block now with the LG G5 and the HTC 10 both utilising the latest iteration of this quick charging technology. In essence, they all look to provide quicker partial charges to your devices to get you up and running again and easily make use of your devices through a heavy day’s work and/or play. We’re not yet at a stage where device batteries can easily last multiple days without having to have a charge and as such power banks are a vital part of any enthusiast or power users’ travel bag.

The Besiter Lightning 4 is small enough to be carried easily, although a little weighty, but powerful enough to provide that quick boost during the day when required. There are other devices that are equally as capable, and we’ve featured some of them on this site, but the Lightning 4 also has a robust and premium design that sets it apart.

You’ll be paying for that design here as the device retails for £32.99 on Amazon currently. Alternative options such as the RavPower 13400 mAh Quick Charge 2.0 offering comes in at £18.74 with the same specifications. You also get an LED torch if you’re into that sort of thing. Objectively it’s not as pretty though.

The Besiter Lightning 4 delivers the power you want, when you want it in a sleek stylish solution. That’s basically the summary here and if design is important to you, you won’t be disappointed by either it, or its performance. 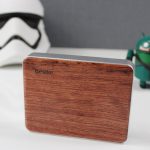