AZIO MGK-L80 RGB Mechanical Keyboard Review: Does it live up to its name?

The world of keyboard seems to be on an RGB tour these days, bringing all the best from the world of RGB to every keyboard. The L80 from AZIO delivers some impressive specifications on spec in line with other competitors in the market. Does it keep up, or is there still work to be done for AZIO to climb to the top of the keyboard makers? Let’s find it out.

Disclaimer: Although AZIO provided me (Jeffrey) with the keyboard, they have had no influence on the editorial outcome of this review. The keyboard was tested connected to my OptiPlex 790 desktop PC running the latest build of Windows 10.

What I noticed is that the keyboard clearly doesn’t feel as heavy as the MK-Retro also from AZIO, while they both come in around the same weight, so this is just an illusion, which once again shows that I’m just weird…

The backplate is made of machined aluminum, which feels extremely durable, and gives the keyboard its strength. Underneath the keyboard AZIO made use of plastic, though this doesn’t change anything to the strong construction of the keyboard. I’ve tried flexing the keyboard, but it’s just not going to happen, no matter how much force I tried putting on it, it stayed it shape and didn’t move at all. The palm rest is completely made of plastic, and likewise, it’s not hard to flex it at all, though this shouldn’t give you any issues at all. The other buttons on the keyboard feel extremely solid as well, including the volume wheel, though I’d like to have some more direct feedback on the wheel as it’s kind of hard to recognize how much you turn the volume up and down (it feels a bit too smooth when turning the wheel). I’ll come back to the KAILH switches in the part about the overall functionality of the keyboard.

If you know the look of the biggest part of the gaming keyboards, this will look familiar to you. It’s not the first gaming keyboard to look somewhat like this, though that doesn’t make the design of the keyboard any less. What’s more to that is that it probably makes it look attractive to a bigger audience. The backplate is made of machined aluminum, giving it a real industrial design which fits the overall theme of the keyboard very well. Turning on the RGB the aluminum reflects the lighting very well, especially once it gets darker in your room. Some of you may hate the RGB lighting of the keyboard, but unfortunately you can’t fully turn off the RGB lighting. Fortunately, you can turn the lighting really dim and white is available if you really don’t want something colorful.

AZIO did an amazing job on the fine details, looking at the status lights of the keyboard you can see the craftsmanship that went into making the keyboard, with a finely machined cut-out for the lights to shine through. Feeling at the top of the volume wheel, you can clearly feel the aluminum used to just give it that much more. It always feels good if companies don’t simply run over the small details, because in most cases that’s where companies make the biggest missteps. Overall, the design will attract the audience it is made for, which means that AZIO succeeded in their goal to make this a gaming centered keyboard.

This keyboard comes with KAILH brown mechanical switches, which is a weird decision looking at it as a gaming keyboard; mostly because the red switches are more pointed towards gamers whilst the brown switches used inside this keyboard are more pointed towards the writers with some loud feedback from the switches. This isn’t to say that the keyboard isn’t great to type on, the feedback is amazing while not being as loud as the blue switches. Like I said, these are mostly attractive to writers, but I’m sure gamers will love them nevertheless.

In the design part I already mentioned the RGB lighting of the keyboard, which is extremely easy to configure; simply press one of the six keys above the arrow keys for specific lighting modes ranging from spectrum cycling, to just one easy color in the color marquee mode. It has something for everyone, which is what makes it so great.

There are two more things I want to discuss here, and that are the 4 included macro keys that can be accessed by the FN key (numbered 1-4 at the F-key row), and the lack of software. You can easily program the macro keys by pressing the macro key next to the volume wheel followed by the assigned action. Four macro keys should do the job for most of the users, which certainly goes for me as I normally don’t make use of macro keys on keyboards.

The biggest annoyance of this keyboard for me is the complete lack of software, this would’ve made assigning the macro keys, or even setting a different lighting mode so much easier. Looking at the price you’re paying for this keyboard it’s also something that most other manufacturers would include with their keyboards.

So, is AZIO up there with the best keyboard manufacturers with the MGK-L80 RGB keyboard? I would say they are, even though it misses out on a software suit which would make setting up the macro keys and the RGB lighting a bit easier. The build quality is phenomenal, the design lives up to its name and all the hype on their website.

In the end, what you get is a good-looking, solidly build keyboard with some great features. All for $89.99 on Amazon International, do note that you’ll need to pay import fees if you’re living outside the US and you want to order the keyboard. Interested? Are you going to pick one up? Do let me know in the comments below! 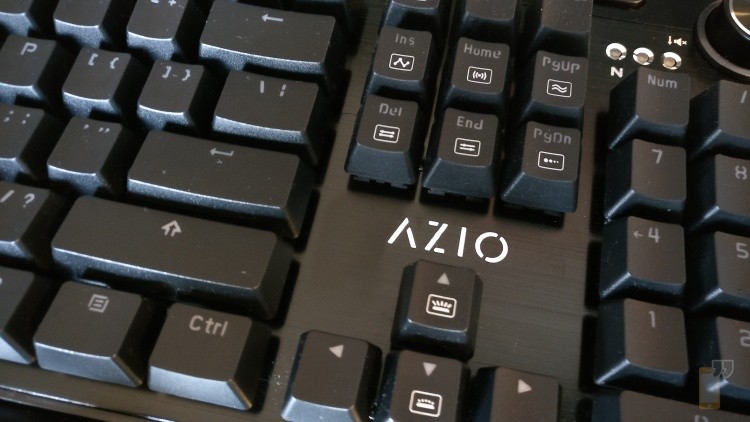 Buy from Amazon US