Aukey is a company I would expect to be reviewing battery banks, car chargers, and other mobile peripherals, but as my review of their Gaming Headset shows, they do have other strings to their bow. The Aukey KM-G3 is an RGB backlit mechanical keyboard for those on a budget, and we review it in full below.

Aukey KM-G3 Keyboard
+ FOR
- AGAINST 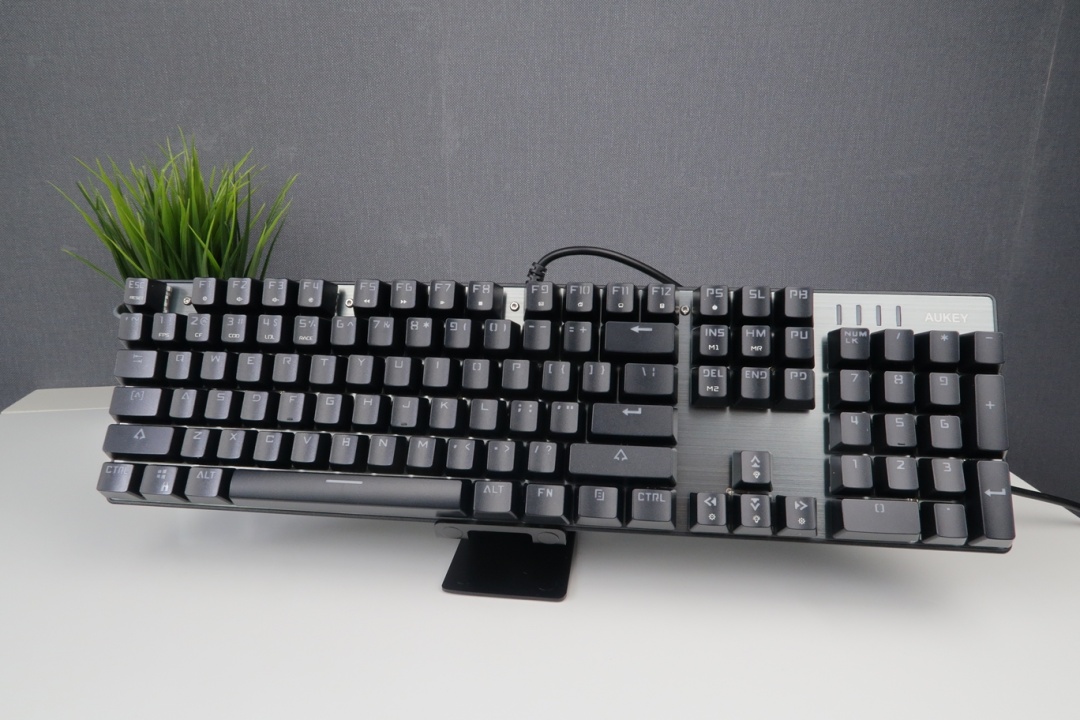 Aukey have created a whole suite of mechanical keyboards; who knew? There are colour variants, 10 keyless options, RGB and non-RGB options and many more, all using Outemu switches which are, for all intents and purposes, budget Cherry MX switches. Those included on the Aukey KM-G3 are Blues, which by design are clicky and loud, and were previously the go-to switch for gamers. Many gamers now look to other variants (Browns, and Blacks for example) but the Blues still deliver an excellent response, which is especially prevalent in FPS games.

The Aukey KM-G3 unboxing is a standard Aukey affair which I actually quite like (regardless of the reason they do it) because it’s usually quite minimalist. A brown box, with a tiny bit of branding on it, and then the keyboard itself within it with a small manual and key pulling tool. That’s it. It doesn’t need to be anything more than that.

The design is relatively minimalist as well. The keys push right to the edges of the board, with no additional base overlap which gives it a compact look despite the fact this is a 104 key keyboard. The back plate has a brushed metallic finish with a matte black plastic surround which allows little to no flex when attempting to bend the board which is a sign of good build quality if nothing else. The USB cable from the keyboard isn’t braided at all, and that plastic-sheathed cable terminates with a USB A connection. There is no double connection here that you see on higher-end boards to allow pass-through for a keyboard-based USB port. There are no additional ports on this board.

On the bottom of the keyboard are a couple of strategically placed rubber feet, and a pair of plastic risers with thin rubber feet on them also for stability. 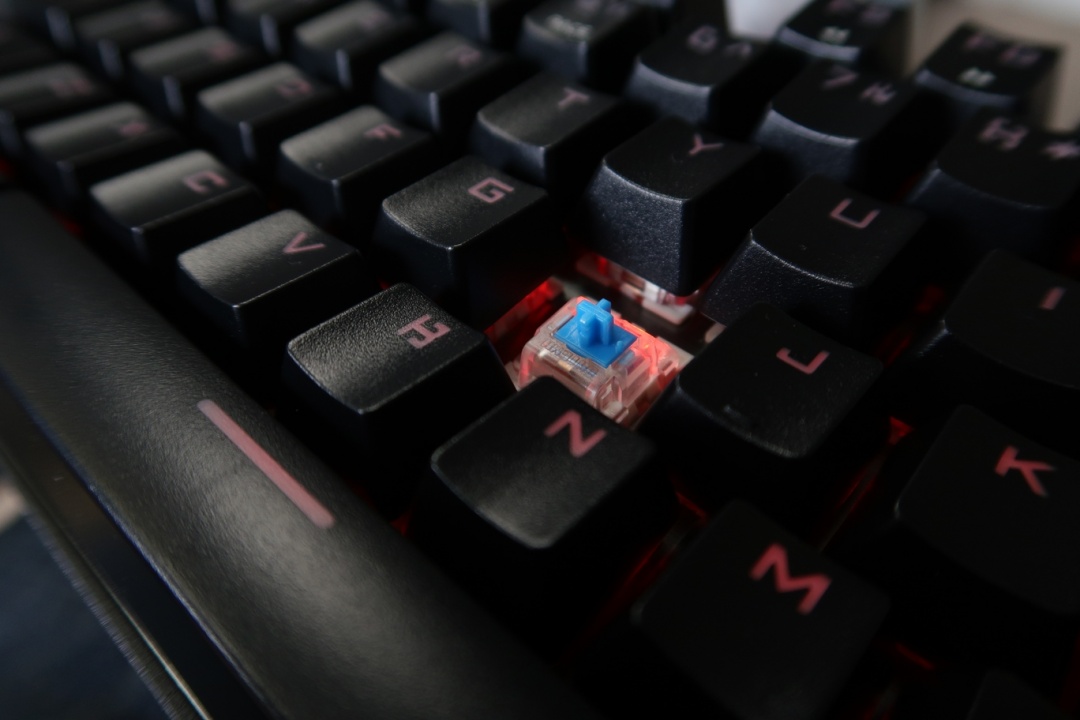 Under the keys, exposed by the key pull tool, are the Outemu Blue mechanical switches. They don’t have the same allure as their Cherry MX overlords but they are actually quite similar in tactility once you’re used to using the keys. As already mentioned, the Outemu Blue switches are loud, like I-wish-I-had-Active-Noise-Cancellation-headphones-on loud. If you sit in an office with people and you’re using this board, be prepared for people to throw things at you. They will, and they should.

There are a number of lighting effects that can be controlled on this board also using the FN key and a number of other keys in combinations. You have a waterfall mode, a keypress follow mode, a breathing mode and static modes also. The colours can be chosen by scrolling through the presets also. I usually pick a particular colour and stick to it as the only real reason I used backlit keys now is to make it easier to see them in lower light or a dark room. I don’t want disco lights on my keys, but Aukey is well aware that some “l33t gamerz” do indeed want that. For added gamer browny points, there’s even a custom colour mode that can be recorded for you to add your own stamp onto proceedings. Neat! 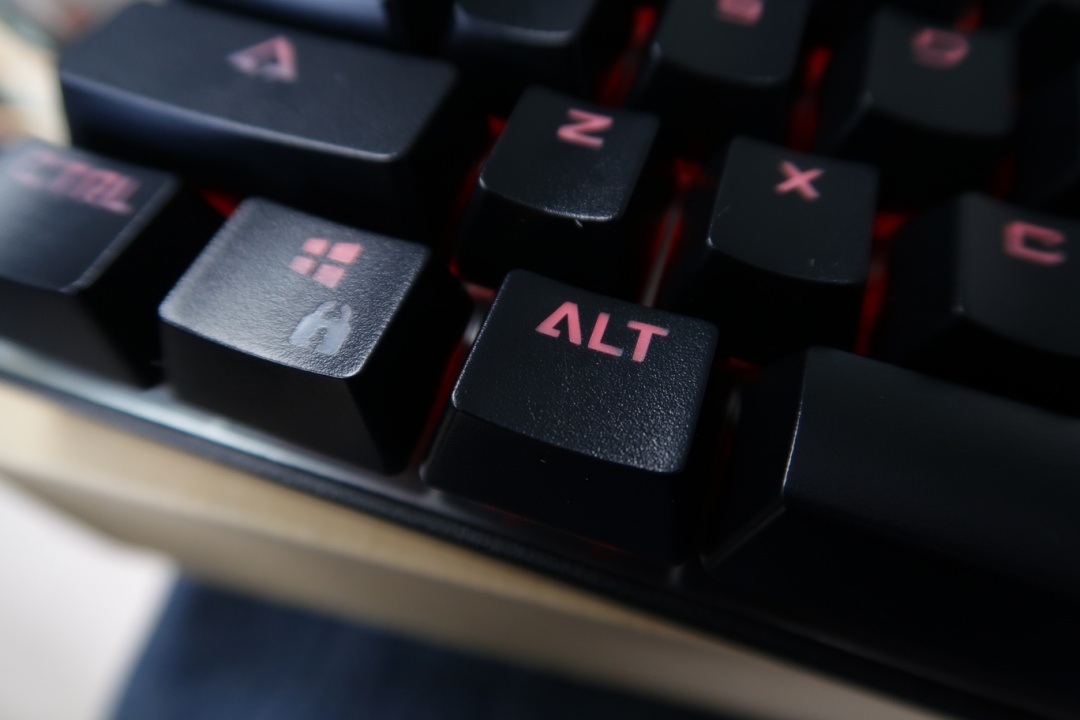 It really does only take a few moments, for those who have previously used MX Blue switches or variations of them, to get back into the swing of things and quickly feel back at home. What will drag you away from that loving embrace just as quickly is the downright ugly and ludicrously crass font Aukey have used on the keycaps. It’s bad enough there is only a US layout of this keyboard, but the font is atrocious. It’s some sort of futuristic type font (or font type if you will) and it just complicates what doesn’t need to be complicated. Of course, if you’re a touch typer or not a typer at all and just a gamer, this will bug you much less.

I actually came to really enjoy this board during my time. Sure, I’d like to have a bit more control, perhaps through a companion app such as that which comes with Logitech or Gamdias gaming peripherals, but for just over £40, what you’re getting here is a glimpse into the big wide world of mechanical gaming keyboards, and your seat at the PC Master Race gaming table. All joking aside though, in a blind test I’m sure even the most hardened gamers would have to concede that these Outemu blue switches still felt pretty good whilst not comparing to more expensive boards. They would bemoan the slight wobble of the keys under light strokes, the sometimes slightly uneven backlighting on some keys, as well as the cheaper plastic back face and the lack of any pass through USB ports, but they couldn’t fault the build quality overall or the price point. No, that wouldn’t win those people over, but if they were on a budget, maybe it might make them double take?

Will it replace my Logitech G910 which uses a proprietary mechanical key switch (Romer-G)? No, but that’s mainly because I’ve opted for some additional functionality as my gaming days are not quite as intense as they used to be and my board needs to provide 75% productivity nowadays. If the Aukey KM-G3 was the only keyboard I had on offer though, I certainly wouldn’t have an issue using it, and at half the price of competing mechanical keyboards with a “gamer” tag on them, it might be worth dipping your toe into the murky world of gamer keyboards with this device before looking elsewhere. It loses some points for the areas raised above, and certainly has its price point at the very top of the list of attributes it has going for it, but that list does contain more items, so this is definitely not a cheap knock off with nothing going for it. It’s worth a go if you’re on a budget for sure.