With more phones dropping the headphone jack, and Bluetooth buds getting cheaper, it was obvious that TWS (True Wireless Stereo) earbuds would drop in price as well, and whilst these are not the cheapest TWS buds you can buy, you can buy Airpod clones for £5 or less on AliExpress, but for £30, these are where I would probably start buying buds locally. 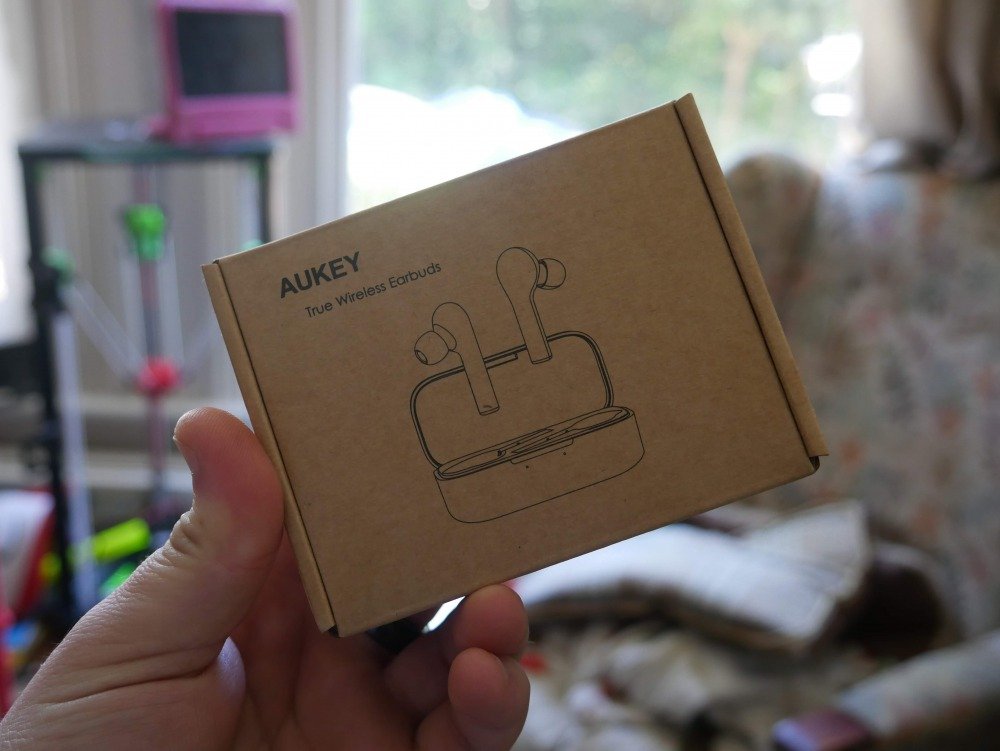 Aukey provided these EP-T21’s for the purposes of review. They have no bearing on the outcome of the review and are not seeing it before it goes live. The EP-T21s we’re used for 10 days on my Huawei P30 Pro, Realme X50 Pro 5G, Realme X3 SuperZoom, Moto (g)8.

Everything about the EP-T21s feels cheap, and I don’t want that to sound bad, because they are cheap, that’s part of their shtick, you can get the full TWS experience for a lot less money, the case is lightweight frosted plastic that looks like it’ll scratch if you give it a strong glare, but at least it is not glossy. The lid is too light, and the magnet clasp is a bit too strong, or a combination of the two, so that opening them is not a one-handed affair like it is with almost every other pair I have. 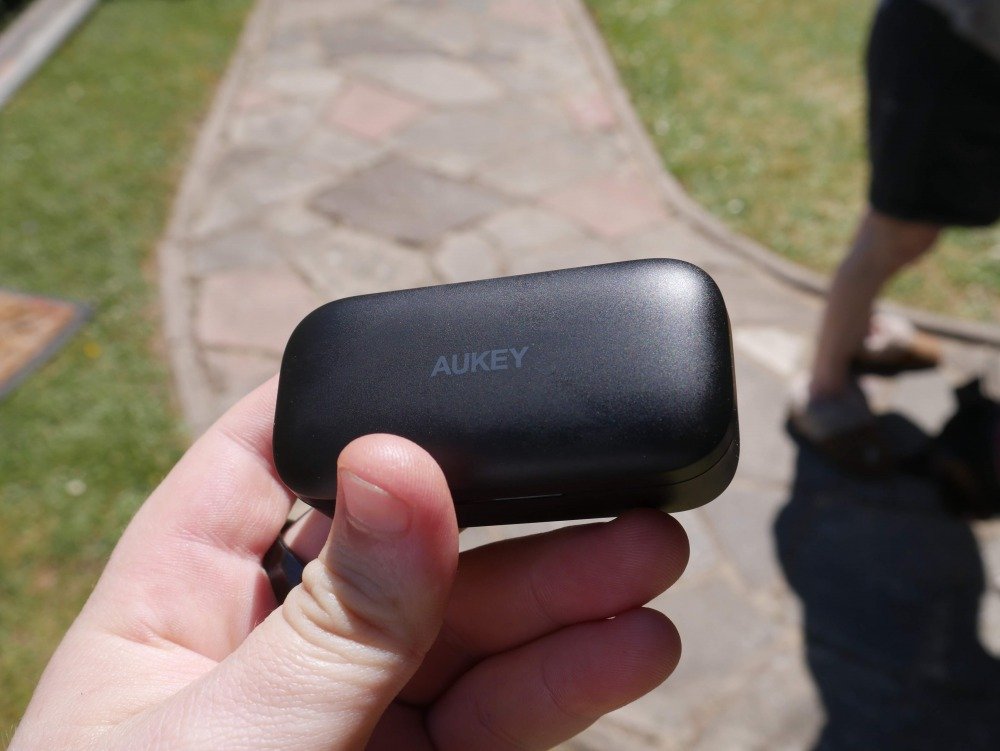 On the front below the cutout for your fingernail to open the lid, are two hidden LEDs that communicate the battery status of the case, which I find a bit strange, either use one colour changing LED, or at least three but two seems a bit odd. There is nothing on either side and on the rear is the shudder MicroUSB port for charging. 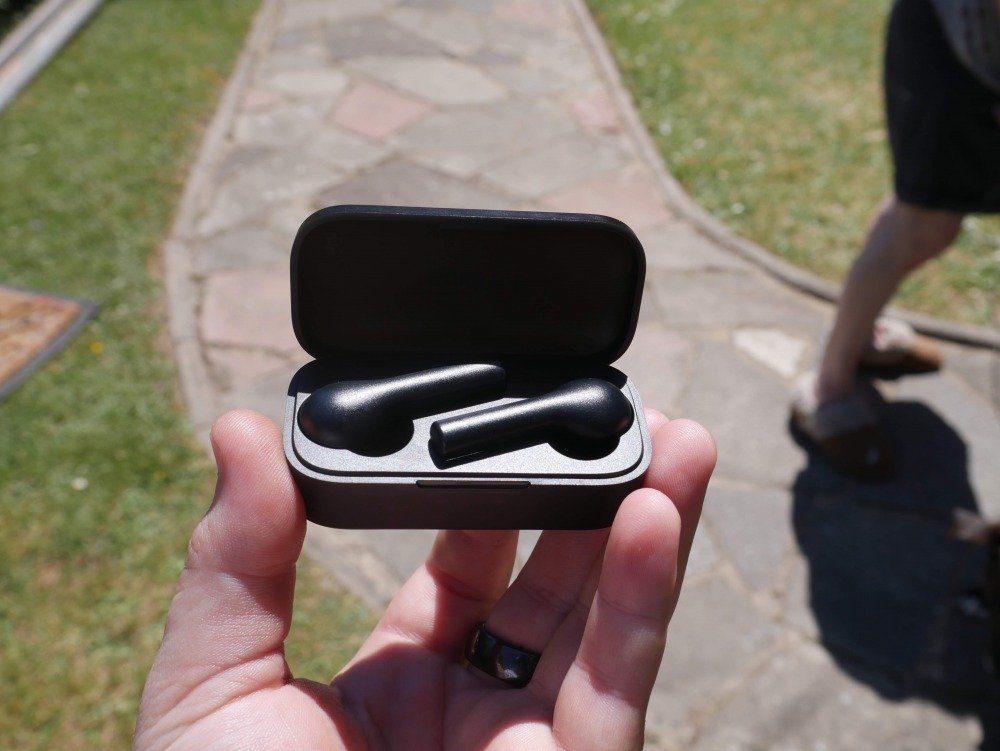 Opening up the lid we are greeted with the two buds horizontally. Unlike other “stem” type earbuds which place the charging pins on the bottom of the stem and can be placed vertically in the case, Aukey has placed them on the inside face. I’m not sure if this is a better or worse design, but the magnets holding the buds in is really quite strong and needed a decent whack to get them to fall out of the case, so it is really unlikely they’ll fall out on their own. 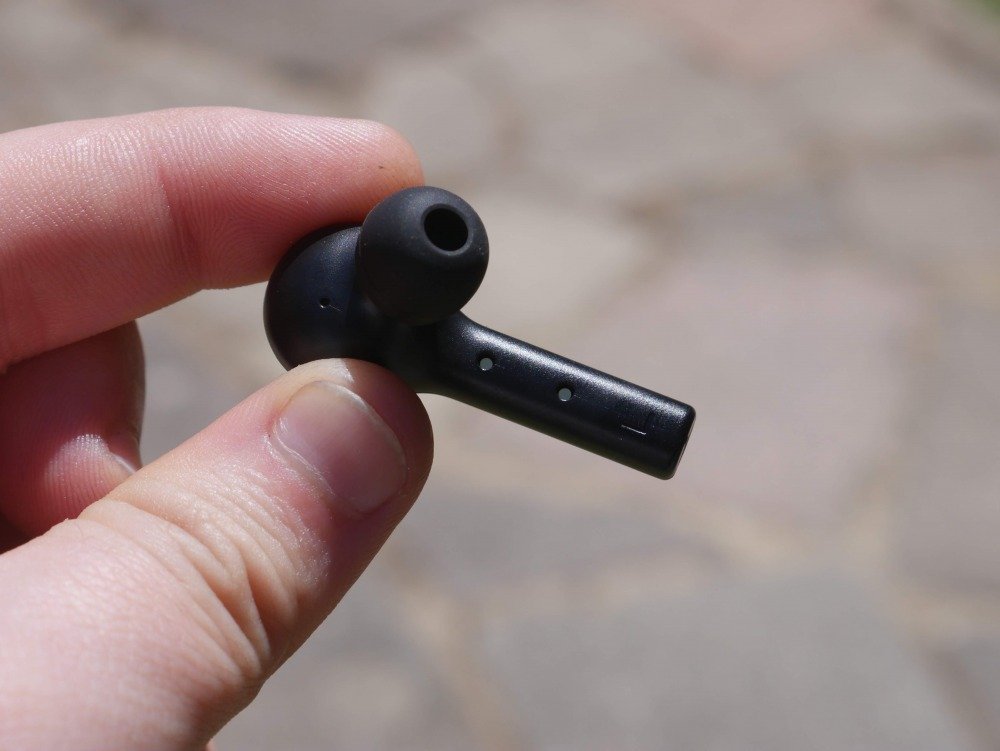 The buds themselves are pretty typical for stem type buds. They have a small protrusion coming from the bud itself, this houses the battery, an antenna and also brings the microphone closer to your mouth for calls or voice commands. Unlike the Realme Buds, Huawei Freebuds 3 or Apples AirPods, these do have silicone tips and replacement sizes in the box, with the medium size installed, these fit me fine, though are on the verge of being a bit big. At 4.2g each they are heavier than they feel when in use, which is strange but they aren’t uncomfortable or too heavy as others I have tested.

As I said at the beginning, these feel cheap, but in the best way. These feel like they were designed to be a certain price point, not like they made something they wanted and had to cut corners to get to this price point.

This is a bit of a mixed bag. These do not sound amazing, they are somehow both bass-forward and bass light? Highs get a bit tinny, but mids and vocals, for the most part, are quite good. 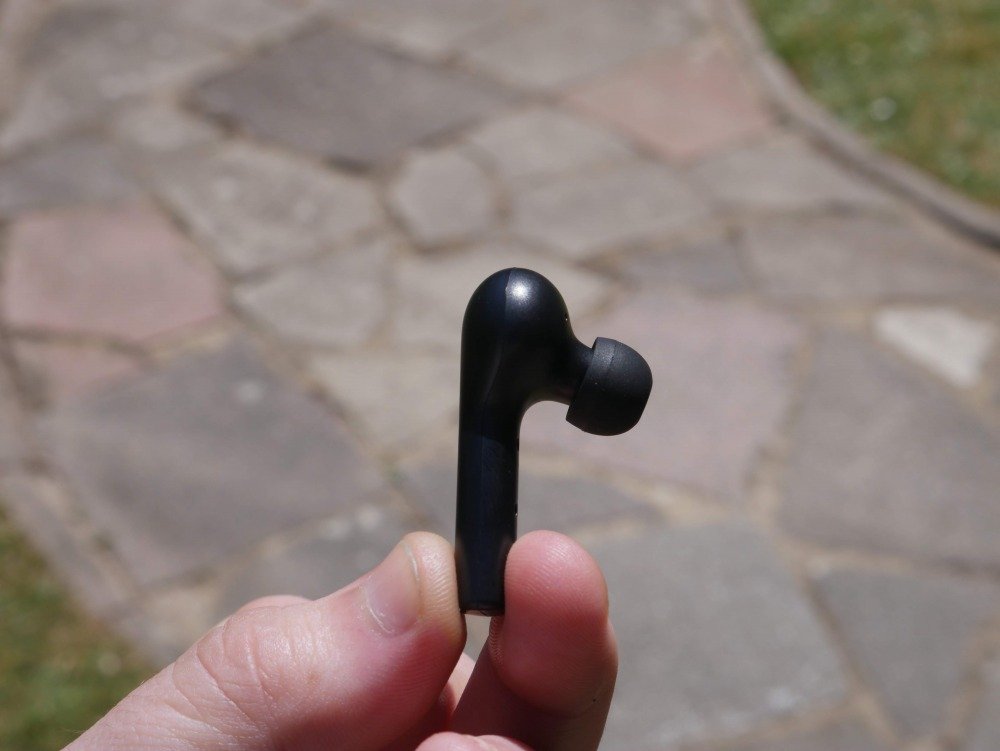 They thankfully don’t fall into the trap of pushing the volume higher than they should, whilst 100% volume is still uncomfortable, it is not nearly as bad as some of the cheaper Bluetooth buds I have tried which aim to mask their mediocre sound by just blasting sound at unsafe levels for your eardrums.

I’m not going to lie to you and say that Andrea Bocelli sounded just as good on these as he does on my Soundcore Liberty 2 Pros, or my HiFiMAN Deva headphones because they don’t, but those also cost £150 and £250  compared to the £30 of these. I would wear these in places I wouldn’t take those. I’m not wearing my Liberty 2 Pros on the train to London or the underground, and my Devas aren’t leaving the house, these sound good enough for the most part of what I listen to that I can still enjoy my music without becoming enraged at how tinny, thin and lifeless it is. 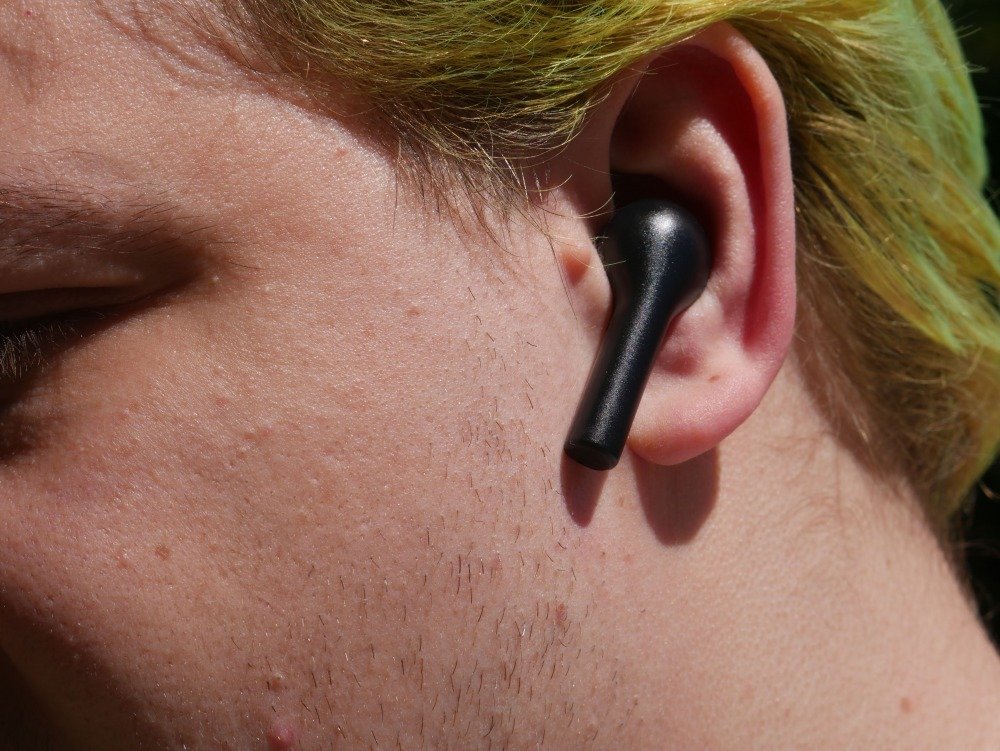 I listened to a pretty eclectic mix of music from the Hamilton soundtrack, to the TRON:Legacy soundtrack, and some mainstream pop in between, and I think the more EDM/ Daft Punk end of the spectrum faired a lot better, there wasn’t as much need to be as articulate as there is with other types of music.

Vocals are also more than adequate, I listened to my favourite Podcast “We Have Concerns” with Jeff Cannata and Anthony Carboni and was able to enjoy it just as much, also go give it a listen, it recently returned from a 2-year hiatus and has oven 600 episodes to listen to.

This is pretty simple, I charged the case up the day I got it, and I haven’t changed it since. And I’ve never had a low battery warning on the buds since I’ve been using them. I listen for maybe an hour or 90 minutes at a time and whilst I don’t use them every day, I’ve been actively trying to use them more during the review period.

The Charging is a right royal pain in the arse though. As with most gadgets under £50, the EP-T21s uses MicroUSB and I hate it. I hate it so much. it is fragile, the cables are nigh on non-existent in my office. The one they include with the buds is tiny and feels like it is going to break as well. USB-C cables are cheap now, as are the sockets, this just feels like they had a bin of MicroUSB sockets in the Aukey factory and decided to use them.

These, sadly, are the weak point for me of the EP-T21s. They almost never work for me and when they do it’s often not repeatable. 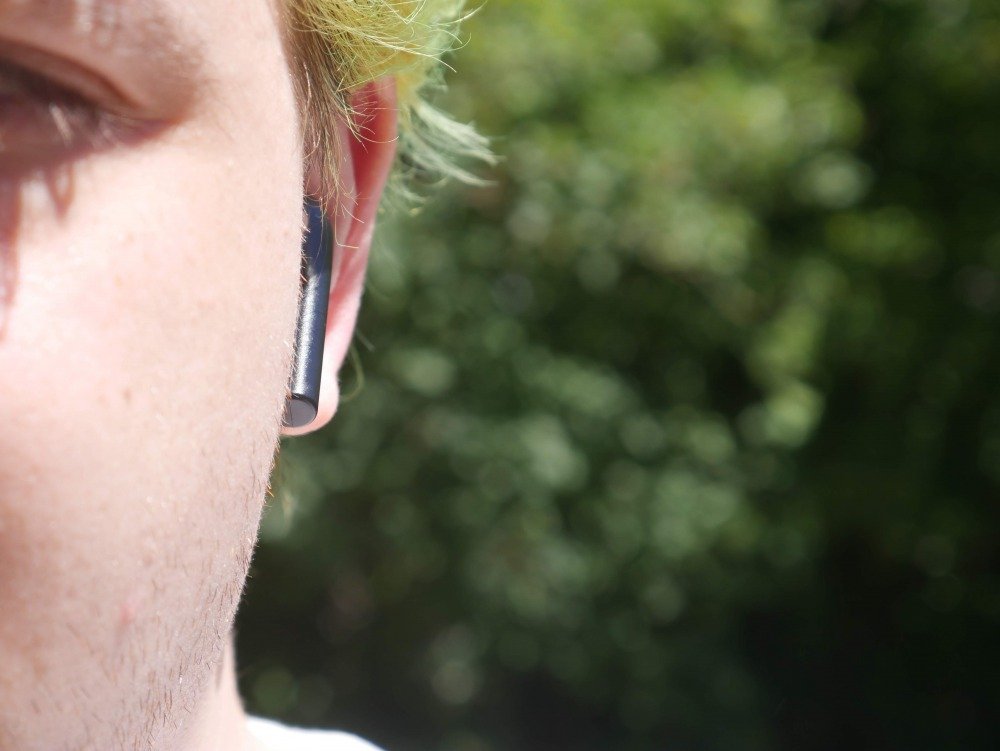 So whilst the controls themselves aren’t too confusing they just don’t work. I know most of my fingertips are scar tissue and it might not be as conductive, so I have two other people to try, and neither of them could get them to work either. We either double-tapped too fast, or too slow, and sometimes the long presses just wouldn’t register. Very annoying, but thankfully I can control playback through my watch, although I shouldn’t have to fall back on that.

Something that Aukey call out is the use of MEMs microphones in use here for “enabling surprisingly clear conversations on these compact buds.” This was not my experience. when using the EP-T21s on my PC on a Zoom call, I have people asking if I had a separate mic I could use as it was hard for them to actually understand what I was saying because there was little to no depth to it, and whilst that could be the connection, I’m hardlined in the router on a 60/20 connection with a sub 10ms ping, and whilst I am not the most emotive speaker on a video call, I’m not that monotonous. In the end, I switched to my FreeBuds 3, not the best, but significantly better (and more expensive). 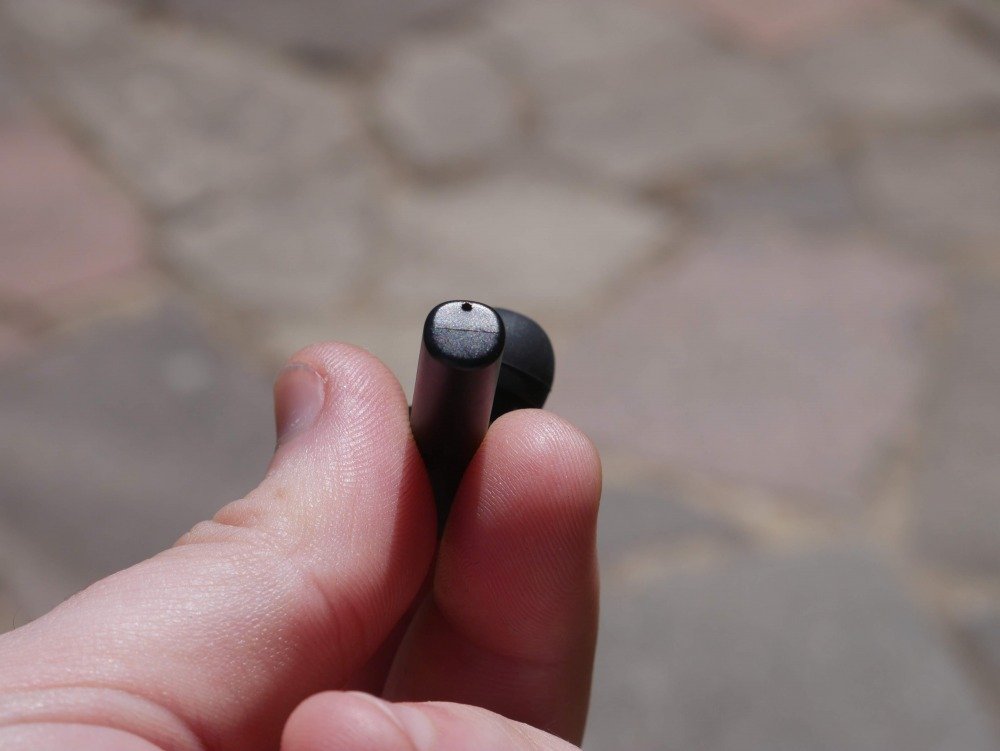 On Android, It was a little bit of a better story, but it depended on the device, they sounded decent on my P30 Pro, but on my Realme X50 Pro 5G they sounded noticeably worse, and on the Moto (g8) I had times where Google Assistant just couldn’t pick up what I was saying and needed me to try again. Usually, Bluetooth earbuds perform better on devices with Qualcomm chipsets (because Qualcomm also makes most of the Bluetooth chips inside the earbuds as well) but that doesn’t appear to be the case here.

So despite the issues with the touch controls and the uninspired music profile, for £30 I’m actually pretty impressed with the EP-T21s. Once the pool opens back up I’ll put these in my swim bag for when I walk to and from the pool.

They definitely have a TWS tax over £30 wired Bluetooth buds or £30 3.5mm buds, but the sound quality isn’t astronomically worse, and I like the freedom that I get over 3.5mm. Just make sure you always know where your MicroUSB cable is, you might only need it for 2 hours every couple of weeks, but you’ll miss using these quite fast I think.