The Aukey EP-B18 Headphones are something we’ve not seen from them before. A set of headphones that have Bluetooth connectivity is one thing, but the minimalist design that is neither over the ear or in ear is intriguing. But does it perform? Let’s start right at the top and take a look at what you get with the Aukey EP-B18 headphones, which by the way is a lovely name isn’t it! No, just us?

In the box, you get the usual suspects.

The unit is made of a thin-feeling plastic and is incredibly lightweight. You won’t notice you have these on to begin with and you certainly would have no issues carrying them around in a bag. On the right ear cup are the main controls which consist of an On/Off/Pairing button, as well a touch control panel to control volume and track skipping. On the bottom edge of the right cup is the microUSB charging port and a pinhole mic, and in the same position across on the left ear cup is the 3.5mm audio jack.

The rest of the unit has no buttons and is incredibly minimalist. Seriously, if you’re one of those people who thinks a smartphone should only ever be around 3mm thick or you have an all white interior to your office with just one fresh green plant for colour, then this is the sort of device for you – kind of. It’s just very minimal is what I’m saying! [perfectpullquote align=”full” cite=”” link=”” color=”” class=”” size=””]It’s so minimal that there’s really not a lot to it, physically or logically[/perfectpullquote]

Starting with the ‘padding’, there’s some faux leather coverings on the head band as well as on the ear cups. Padding is in inverted commas simply because there’s just nothing of it. It is, hands down, the most thin and loose cushioning I’ve ever seen on a pair of headphones. Pushing down very lightly on the head band immediately results in bottoming out to the plastic band itself. The same process on the ear cushions results in only a marginally more comfortable experience. We’ve come to expect better from Aukey products and this one is let down in the comfort stakes.

When worn, the Aukey EP-B18 isn’t too bad to begin with. Because it’s just so darn light, comfort doesn’t become an issue for the first 30 minutes of use. Instead, the biggest gripe I had was finding a stable fit over my ears. As these are on-ear units, but in a strange rectangular shape, they don’t sit on the ear all that well and instead sit in front of the each, pushing back over the ear canal. Once you get used to it, it isn’t all that bad.

Hitting play on your device of choice, either via aux or Bluetooth, is again a bit of a rollercoaster ride. The positives here are that the sound is clear. It can get rather loud without any distortion and the highs are actually decent. That’s it though, that’s all I’ve got though for the positives. The rest of the unit is a little sub par audio wise.

Bass is near non-existent and when it does exist it has no volume or rumble to it. It’s the sort of bass you used to get out of the very earliest flat screen TV speakers. Yup, that sort of noise! Mids are muddy and bleed readily into the lows, when they appear. They rarely cause an issue in terms of separation at the high-end though as I previously mentioned. If you want to hear the individual elements of a song or get lost in a soul singers’ wavy voice, then these aren’t the units for you – not by a long shot.

The touch interface operating on the right ear cup is easy to reach and rather too easy to misinterpret. There are positional gauges at both the top and bottom of the panel. Tapping the middle of the panel will pause the playback, whilst pressing the top or the bottom will skip the track. Long pressing either the top or bottom sections will push the volume up. It’s a nice idea but it feels just a little flimsy.

Taking and receiving calls on this unit are actually quite acceptable, but in more busy areas the recipient couldn’t hear me all too clearly. That, coupled with the age-old issue of Bluetooth connection distances varying dramatically on cheaper units, meant that occasionally the call would be lost from the headphones and continue on the smartphone I was using. One to bear in mind.

Moving to the last aspect of the unit, the battery life, we at least have some decent output here. From the 300mAh battery we managed to get just shy of the claimed 10 hours of continuous playback which was pretty acceptable. Of course, if the battery does die, there’s always the 3.5mm aux cable to use.

Overall, the Aukey EP-B18 headphones flatter to deceive. They are minimal in every conceivable way, and whilst having positives such as the lightweight construction and folding design, the main draw for headphones, the audio, is limited to say the least. The touch panel was a nice attempt to deliver functionality in a more modern way, but it didn’t quite work and you’re left feeling that this is a unit that would be purchased whilst on holiday, and used exclusively for that holiday, and then never again. This unit is rather cheap, granted at just £16.99, but it also feels every penny of that. There are worse headphones, but that doesn’t make this a good pair. 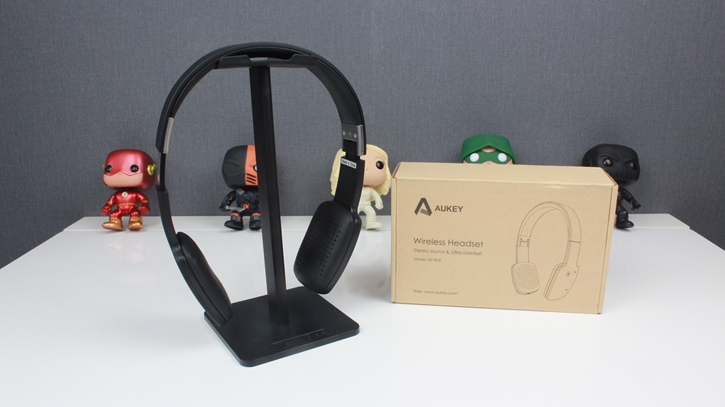