Disclaimer: Although Aukey did provide me (Jeffrey) with the power bank, they had no influence on the editorial outcome of the review. The power bank has been tested for approx. 2 weeks while charging my smartphone and all other accessories.

Power banks usually are a tad bit boring, and you can’t say anything different about this Aukey Power Bank; it’s just one big and black slab of plastic. I’m happy to tell you that Aukey decided not to use glossy plastic, instead they went with a nice and matte black plastic that feels good and it looks just fine.

The plastic doesn’t seem to be scratching easily, and I haven’t been able to scratch it during the past few weeks while the power bank was sitting in my backpack on the daily. You could basically say that the design is just as functional as the power bank itself is, and that makes me a fan of this power bank. No, it doesn’t look truly beautiful or anything, but power banks shouldn’t be made to look pretty in my humble opinion.

The Aukey Power Bank is made of two pieces of plastic which makes that the overall construction feels extremely solid. I’ve accidentally dropped the power bank a few times on a somewhat softer floor at my house, and it hasn’t been damaged at all, and nothing seems to be damaged on the inside either. The power bank luckily isn’t made of a lot of pieces, so there isn’t a lot to break either.

The USB ports on the power bank feel really solid as well, no wobbly or cheap feeling USB ports here, this goes for both the in and outputs.

It’s time to test the performance of the 20.000mAh power bank already, and this time it took a while before I could discharge this power bank after I made sure I’d fully charged up the power bank…

As in all my power bank reviews, I’m using my OnePlus One as the device to charge. Which has an original capacity of about 3100mAh. But after almost 2,5 years of using the OnePlus One, its battery is surely degraded from the original capacity. As for now I’m taking 2900mAh as the reference capacity for in this review. What you do need to take into account with this test is the amount of battery that gets wasted in the voltage conversion process (the heat you usually feel while charging). Usually I charge the battery of my OnePlus One after is reaches the 10% mark, so that means that I’ll charge up 90% of the battery inside the OnePlus One. 90% of the reference capacity I’m using this review is: 2900 : 100 x 90 = 2610mAh. That’s the number I’ll be taking into account when looking at the efficiency numbers later in this part of the review.

Math is boring, isn’t it? Well, let’s do the final part of the calculating before going to the last part of the review. In theory, the battery should give us a 20.000mAh charge, though there isn’t a battery that’ll do exactly that. This battery charged about 16.704mAh; 16.704 : 20.000 X 100 ≈ 83,5%. This means that this specific power bank has an efficiency rate of 83.5%. That’s actually surprisingly good if you look at the price you’re paying for the power bank, though there are similar performing power banks out there.

The last small thing that I’d like to add, and it’s something I actually really liked, is the LED in the power button which tells you how much charge is left by the color of the light. Where others just show 4 boring white dots, this is something different. And I liked it.

The Aukey power bank is available for £29.99 on Amazon UK, and for the money you’re getting a power bank that looks like how power banks should look like. Furthermore, the build quality is great and the performance is certainly on par with the competition and even above some of its higher priced rivals.

Going to pick one up? Do let me know down below! 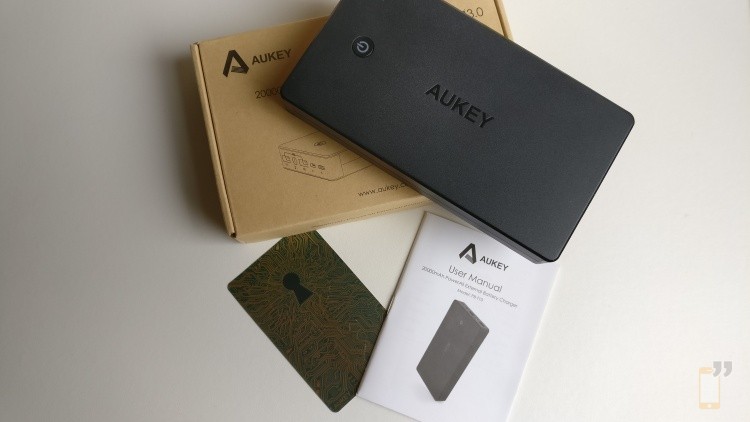