The Zenbre E5 are neckband ear buds, on a budget. That’s not a bad thing always, and it’s not a bad thing here; I’m just saying it how it is off the bat. These are pocketmoney-aimed Bluetooth ear buds, with a neckband, for sporty, fitness types to use and abuse – they have decent audio too. Let’s take a deeper dive in our full review. 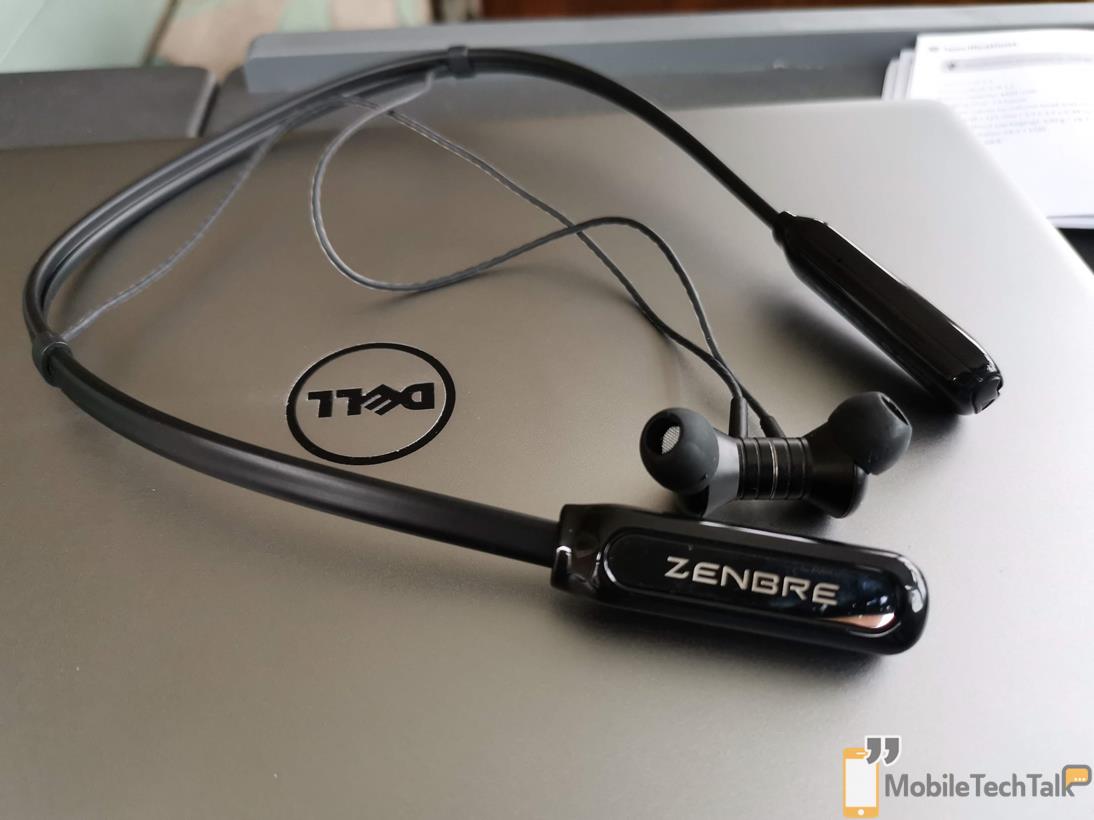 The Zenbre E5 comes in a very plain brown box, and has very little wasted packaging, something we all should be thankful for in 2019, and perhaps a little more aware of.

In the box comes a microUSB charging cable (of a decent length) the Zenbre E5 buds themselves, and the obligatory paperwork along with some spare silicone tips.

My first impression of the unit was, let’s say, jarring. The neckband is a flat, shiny glossy black plastic number, with shiny (again) silver buttons on the control pod. Whilst the unit will hardly be seen if you’re wearing a coat or a collar, they just don’t give off a premium first impression. Luckily, the impression it would make on one’s wallet is equally non-premium, so it gets more than a pass from me. In fact the majority of this review needs to be tempered with the “but it’s so damn cheap” statement.

Placing the unit over the neck, you have limited flexibility in terms of how the neckband can sit. Whilst the plastic surrounding is malleable, it doesn’t actually stay where you bend it, so it ends up cupping your neck. Thankfully it’s not uncomfortable though. It should be, as the neckband should be a little heavier to withstand some jolts and knocks whilst you’re running down a busy street for example or going hard at it in the gym, but it’s not. That’s both a pro and a con.

The cable length initially felt too short, but there are little rubber stoppers that can be adjusted to provide more or less wire to allow easy access for the bud to the ear. In-ear these feel comfortable too. Unlike my difficulties with other silicone buds, these just slide in and sit there nice and snug. I’m putting this down to the fact the buds are a little more oval and round thanks to the driver housing construction.

Once you get the beats flowing you get treated to a decent audio experience with zero interruptions despite the Bluetooth 4.1 in tow. Bluetooth 4.1 shouldn’t be an issue, but there is always the chance that a cheaper chip is used in products that are at the more budget end of the lineup like these are. Thankfully that doesn’t seem to be the case and I experienced no disruption at all until I got to the edge of the suggested 20-metre range, which is par for the course.

The bass is actually really good for such a cheap device. Listening to Hip-Hop and Pop hits I noticed a few nuances in the bass on tracks that had previously gone unnoticed. That might just be on me, but these same tracks have been played on headphones ranging from £30 to £300 as well as through various car systems too, so that says a lot for the clarity of the low end on the Zenbre E5 drivers (or not a lot for my ears!). The high-end does get lost a little but not too much at all. Overall a pleasant listening experience, whether you’re bumping tracks of audiobooks/podcasts.

Whilst I didn’t expect any noise cancellation at the price these debut at, the buds do deliver an acceptable level of passive isolation from the mundanity of real life. Your mileage might vary on that front though as it’s entirely environment dependent.

That listening experience benefits from being a little longer than I thought it might thanks to the 12 hour play time. 12 hours isn’t the largest playback time we’ve seen marketed on ear buds, but again, for the price, this is more than acceptable. Given that the Zenbre E5’s also come with IPX4 water resistance, you can get sweaty in a few gym visits, charge for a couple of hours, and rinse and repeat!

The Zenbre E5 might not be the best pair of neckband ear buds available, and might not be the ideal pair to base my views on the entire segment, but they do a good job of showing me what could be out there. The Zenbre E5’s in their own right deliver good audio with very good low end, and good battery life along with IPX4 water resistance too.

They might look like cheap knock-offs, and that plastic certainly doesn’t help, but the crux of the matter is, they are cheap. Of course there are question marks over the durability of the product, but from our review period, we’ve had no plastic creaks, no breaks in connectivity, and nothing to worry about build quality wise. So, give up a few pints or G&Ts, buy a pair of the Zenbre E5’s and enjoy some decent audio, safe in the knowledge if they do break, you won’t have to re-mortgage your house to replace them!

SanDisk Ixpand Review: Works But At A Cost

Huawei P40 Pro+ 5G Review – Is It Still A Flagship Without GMS?