Thanks to Musica Acoustics for the loaner.

Ortofon isn’t a brand that most consumers will be familiar with. They hail from Denmark and are best known for their cartridge heads. you know, those things that sit at the end of the arm of a record player. Yes, I said record player, those big black vinyl disc things. Well, Ortofon Japan also makes earphones and this is me having a listen to their latest and greatest offering. Lets see how it got on shall we?

Oooo pretty box. Personally the silvered is a little too much but my word is it visually attention grabbing. Then the inner box, I get the impression it should have jewellery in it. Actually it does. The e-Q8’s are clearly meant to be as much looked at as they are listened to. Holy crap look at the things, they do look lovely. Shiny enough to be attention stealing but silver so it has that air of monochromatic simplicity. I have always loved a bare metal finish, granted I prefer a brushed finish but still. They are lookers. Even that cable, with a woven cover, it feels sumptuous to the touch. Every single aspect about the e-Q8 says, I am a premium quality object.

In the ears and they remind me of the e-Q7 from back in the day. Middy, somewhat lovely, gently smooth. Still it feels like there a hint of something it’s holding back. Also, hmm lows they seem to sweep away rather soon.

My first impressions hold true. Acoustically where I’m mentally leaping to is to the SE420’s. These are ever so polite. For many musical stylings that’s just fine. I find that soft and gentle lows the likes of which you’d find in Nora Jones’s tracks or in soft forms of Jazz. Slow classical pieces too are extremely amenable to the bass here. Susan Wong sounds so achingly good. Soft, drawn out, a sense of every note languidly yet lightly lingering on the ear. The bass is just the softest of companions. Its depth is rather good for a BA but it’s just soooooooooooo polite. It’s actually too polite. I find I’m having to force myself to play anything fast or aggressive. I don’t want to. It’s like trying to take a Bentley round a race track, it doesn’t matter how well it may or may not perform, it just feels inappropriate. I just can’t do it. No seriously, I can’t. Every time I went out of my way to pull up something fast and punchy, every time I ended up drifting back to slow and welcoming stuff.

Depth is nice for a BA, smoothly and gently declining away. It is rather full and broad sounding for a BA too, much more dynamic like in that regard. However it’s just so polite and well-behaved it can’t convince me that it can roar. It’s never dominant even where the bass ought to and it never punches with any hint of violence. It’s very pleasant bass but for much music it’s just too darn polite.

Here is where they shine. The 7 before them did too and from what I’ve read, so to do the 5. I’m a firm believer that most of what you want in music is in the mid-range, most obviously it’s where human vocals live. It’s where are ears are most finely tuned and it’s what our brains are configured to pay attention to. It’s the bit you need to get right in my opinion, of course I’m a bit of a “mid-head” but hey. The 8 is sumptuously elegant. It’s so effortless in its presentation, so relaxed and serene. Slapping on some “The Beautiful South” and the vocals are just wonderful. So relaxed and melodic, they just ebb and flow with not the faintest hint of effort. They are ever so lovely on the ear.

However, they do have a bit of an upper mid peak so at times things can become a little over energetic. Once or twice it got very close to a sibilant ear stabbing. These on the whole are very much focused on the mids, they are energy abundant in the vocals and while they haven’t the cleanest guitar twangs they have soooooo much energy. Feed them crappy vocals that scream and you won’t have a good time with them.

Once you get away from the mid / transition zone your fine. Their more soft, slightly diffuse nature starts to come back out and you get a more pleasing picture. Nicely detailed but very subtle about it, think a 1080p image that’s been filmed with a slight soft focus filter. Lots detail but the finest imperfections are softly diffused to give you a more pleasing picture. Treble detail is in there, however it’s not edged. It isn’t cleanly demarcated so you have to pay attention. It’s a very easy on the ear sound that still retains a good level of treble. It does trail away at the upper end but it’s not really what it called subdued. The treble quantity level is pretty much in line with the bass.

They also share a similar flavour to the bass in that they are highly competent but a little restrained, reticent and hesitant to dazzle. They just won’t explode in a shower of crystal shards no matter what I did with them. They are nice, polite, capable, accurate and detailed. Still I find them being a little bland.

N.B. The 8’s are wildly sensitive so if you feed them a signal that has hiss, it will hiss like a bag of snakes and throw in every pop and crackle you can imagine too.

Nice, for a BA its huge sounding. I don’t see any talk on the box of it being one of their so-called “moving armatures” but I’d bet that’s what inside. It’s a halfway between dynamic and BA so it’s not surprising it sounds far larger than normal BA things are. It’s a full and encompassing sound scape. It doesn’t feel like its audio being injected into your brain, its more full, more natural feeling. It’s all highly integrated but instrument separation is so so.

Absolutely fine. However they do have a wide bore tip so you may not want to try to wear too deeply.

They do look a little bit frakenbolts but wearing up and over my ears they just fine. Down they stick out a bit much and the angle meant they forever feeling pulled upon by the cable. So wear up and problem solved.

They are beautiful to behold. Though they make me want to fish out the set of white Sony Hybrid tips a have somewhere. Pretty pretty stuff.

I don’t think I had them on worn down long enough to notice. Up I can’t say I noticed anything either.

Oh there would seem to be much debate over this. The consensus would seem to be that they require something that can dish out power at stupidly low impedance levels. Only then will they be their best. I have found them to be somewhat of a pain in this regard. They are weirdly variable with minimal predictability as to what will drive them well and what will make them a bit nasally. So do they need power? The simple is answer is yes, boat loads, sorta, well maybe or maybe not. There seemed to be little obvious outward reasoning to their paring.

Oh and if you think the solution is to add an Ety impedance adapter, think again. I tried and it made them extremely nasally sounding.

They being armatures are rather sealed and thus they isolate well. Easily enough for most typical use cases. For dealing with traffic, the general public etc etc are all good. Probably good enough for the Tube or flights too. Oh and my standard warning, please do look where you’re going least you become a roadkill statistic for you will not hear traffic using these.

Everything about these say “premium” and that includes their build quality. Containing things such a pure silver driver coil you wouldn’t really expect anything less would you. The look premium and the certainly feel premium.

The standard really, a bunch of tips and cleaning tool. There is a little case thingy but I’m not wild about it. For one it’s twice the size it needs to be. Aside from a more practical case though there isn’t anything more I’d particularly want.

Are these “good value?” Well, no. Neither Japan nor Denmark are places known for spitting out “value” products. They both are associated with precision, quality, objects of beauty that should be treasured as little pieces of technological art. None of these ideas feed into the notion of what we would term “value.” Coming in at US$320 they are not cheap objects but they are lovely, just be aware same of that fees is going to their looks and materials (silver) used in their construction.

N.B. Musica Acoustics seem to be selling there considerably more cheaply than the US$425 I found elsewhere.

These are curious little things. I find myself pleasantly enjoying them, they are a rather pleasantly lovely earphone to listen to. That is their blessing and their curse. Blessing in that they are so pleasant to listen to. I could happily listen away for hours and have no issues or complaints. However after listening for hours I can’t say I ever heard anything from them and thought “Wow!!!” these are amazing. They aren’t amazing, they are pleasantly lovely. Is it a curse to be thought casually beautiful? It just can’t capture my attention.

They are good, it’s just so not thrilling or exciting. Mildly beautiful, it may be but I can’t help feeling they’re holding back. I don’t know if that’s because I haven’t found the right pairing for it or it’s just it’s serene, chilled out nature. It is very nice in every way but there is always a but. I like the e-Q8 it’s a really lovely thing but I just can’t love it or indeed have any strong feelings about it.

So should you buy it? Well flat-out you can get better sound but, they do offer you a beautiful package. They look exceedingly good and they feel quite wonderful. That they point out the driver coil is pure silver, you are getting a top quality product. Everything about it says quality in every conceivable form. Still it’s just not exciting or attention grabbing and I need a little hint of that, I need to feel something toward it and I don’t. Everything here is competently capable and pleasantly lovely. 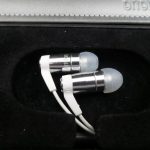