Denmark, so when I think Denmark I think, bacon, butter and something rotten in the state of. I dont really think earphones but that might be about to change with a new offering from Nouske. They were a case and cover maker but now they are moving onto audio, if your interested in what their first offering is like, read on.

Thanks to Nouske for the sample

Yes I had never heard of the either. Curiously googling them and finding their home page I can’t see anything about these. However they apparently are the home to “metrosexual tablet perfection,” they mostly make cases for tablets it would seem. They look pretty nice covers too but that’s to be expected if they are being designed in Denmark. So anyway, the NH-14’s. Nice little box, hand full of tips and the buds in a goldish kinda colour which I can’t say I’m loving. Weirdly they have a brownish cable with a reddish twisting pattern. Visually it’s all a bit unexciting.

In the ears and that unexciting comment, well that isn’t how they sound. Drama!!!! Drama in abundance. Oh there of going to be fun little beasts to play with. Though they seem so detailed too, flicking back to find their price, amazon UK says £38. Hmm these are the first thing I’ve had in my ears today so things can often feel better than when you start comparing to others but that seems a bargain. Maybe it’s my imagination but these are as detailed as they are drama queens. Curious. Burn in time anyway.

Ignoring the things on the box such as “with Real Subwoofer” and “Ultra Low-End Sound Performance” however that last one made me giggle. I know what they meant but it’s still funny. Anyway, these babies have a dynamic driver in them just devoted to the bass. So hands up everyone that will be surprised to learn they are rather bassy? Mind you they aren’t crazy, the bass is pretty good. There is an underlying solidity to it but with a soft squishy memory foam covering. It’s nicely balanced between solid and bloomy. It lets you also get away with increasing the bass levels before they get ear tiring. It does also mean though it’s not the quickest bass. Which is fine but paired with a BA that are always much faster there is a more notable change of style. Not a bad transition at all by any means just the mids feel more skilful. The bass is a little flabby standing beside it. it’s not bad bass, its just not as good as the BA in there.

Quantity wise the bass is somewhat dominant. It’s above the mids for sure but maybe only a smidge ahead of the treble. Still it’s never really one for taking over even when pushed. I rather like it actually, it’s got good body and fullness to it.

They are too recessed for my liking but quality wise, well BA’s frankly kick ass at the mid-range. They are really nice, a little laid back and chill. Relaxed with a dash of warmth. The Beautiful South sound really enjoyable on them. Yeah so other things do differing aspects better these have a nice confluence of factors. It’s just plain and simply nice to listen to. it’s not particularly analytical, nor dry, nor creamy, nor expressive, nor emotive nor anything else. It’s just nice to sit and listen to, maybe sing along to.

Quantity wise, there is my only complaint about these, I’d like more mids. I get that a V shape is more attention grabbing and it know it’s not a massive V shape but I found the vocals to be highly enjoyable, sure a little slanted toward the lower end but they were really nice to listen to for hours. So kind and mellow on the ear, like a comfy old sofa I know it’s not “the best” but I really, really enjoy it.

The proficiency level here picks up a notch. The highs are forward enough to show off a little of the BA driven in them can do. It very nicely refined for BA at the price too. However I still don’t really find I’m listening out for the detail. I just don’t care. These are much more about the integrated whole than a collection of parts. In Owl City’s “On The Wing” the treble edge, is rather hard and it lacks a bit of extension. BA treble is often unforgiving and when you push these to spit out lots of treble, well it’s a little cutting. Over all it just feel like it’s what they want to be doing. They want to go back to a nicely bassy, warmly mellow scene. I dunno, I’m just not feeling it.

Pretty big, they have a nicely full-bodied sound, they are nice. A big comfortably size body of music. Moderate distances, the upper treble sounds a little distant at times but otherwise everything is rather nearby.

Great. No issues from me, in the ears they went and that was that.

No issues at all for me here. They do claim “Unmatched Comfort that moulds into every type of human ear possible.” Not sure about that but no problems here.

Have I not seen this somewhere before? It has a darkish grey translucent sheath over a swirling red and grey banding underneath. I like it, visually and to the touch it’s nice. Feels pretty sturdy too.

I remember when stuff at this price you expected to give concessions about build quality, you didn’t expect things to be as nicely put together as higher end stuff. These however are great, nothing at all to complain about it.

It’s the usual story here, worn up, don’t get any, down you do. Plus with no neck synch you’ll really want to wear them up, which you should do anyway.

If you want to big up the bass, then an amp really brings it out but otherwise, you don’t wildly gain much by throwing more power at them. In all honesty for most listening I’d say you’re possibly better off not amping them. Just plug them into your phone and youll be fine. They are clearly designed with being powered from a phone in mind. With the so so Iphone 5 the bass diminished, its proclivity to expand and fill all the available space was tamed. The result is that with the 5 you ended up with a little more evenly balanced and even handed sound signature. Likewise with the Lumia 735 in play they were arguably at their best. Mids still a little back for my tastes but the bass tightened up notably. It was a bit of a surprise how fast and nimble Owl City’s “Cave In” became on the 735. Seriously unexpected.

So in short, do not go out of your way to amp them. If you want to try it then feel free to but don’t count on there being an improvement.

You know it’s getting to the point where I say the say things over and over. It’s at the better end of what a dynamic will give you so fine for most use. You know, walking out and about, on a bus etc etc. Not what I’d pick as a first choice for a flight or Tube commute but if it’s what you got it’s what you got. As ever, please try not to get run over, you won’t hear traffic with these in your ears.

You get in the box 4 pairs of tips. That’s your lot. I’m fine with that but may I suggest if you want them to live a long life, hit up eBay and buy a little case for them.

At US$50 or £38 it’s in that, audiophiles think is dirt cheap but normal people think is expensive for earphones band. That these are dual driver, of a hybrid dynamic and balanced armature configuration would have been thought impossibly a few years ago. Hell a single BA at this price would have been thought impossible never mind adding another driver, a dynamic one to boot. These are earphones about giving an extremely ear pleasing sound while being gentle and still retrieving enough detail to keep anyone happy. Acoustically you get a hell of a lot for the money here so I’d say there are excellent value, they’ve got some stiff competition but these can hold their own.

The NH-14 is a funny little beast. For one it seems to also come in wood and which looks totally different, so I’m going to ignore that one. Gold hmm yeah I don’t like gold. They also come in black and that looks pretty nice. What’s also pretty curious as that Nouske seem to have pulled these like the proverbial rabbit out of the hat. They make phone and tablet cases yet have pulled a fully formed earphone out from nowhere. Not just that, it’s a really good one too.

Pair these little beasts well, like with the 735, and you get a highly pleasing listening experience. Its bass is wonderfully easy on the ear, a good level low end rumble, rising and expanding giving an overall richly and nicely articulated low end. The mids too are so nicely rendered, sure a little low-end skewed but I like it, it’s so nice to listen to, so pleasing I can sit with them on all day and never feel like my ears need a break. Likewise the treble, on the whole it’s so ear pleasingly rendered, enough crispness when called upon but naturally more rounded. It doesn’t want to serve up any brutality and my ears love that. It’s just all such an ear pleasingly nice combination.

So should you buy one? It really depends what you’re after, this would be a great only IEM. It’s not so strongly pulled in any direction to something I’d say is a great example of xyz. It’s about being a nice sounding, just plain nice earphone. A great big, general crowd pleaser, bit of a V shape with a hearty bottom end that should have enough fullness and body to please most bass fans. Yet the BA in the works to keep the mids and uppers cleanly rendered, clarity but gently pleasing. A bassy and warmth slanted generalist that is highly enjoyable to listen to. I like them. 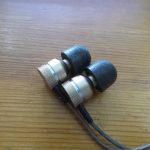