Thanks to mp4nation for the sample.

Okay, my normal review format is out the window for this one. Not much use assessing the sound quality or isolation on this one! So let’s just crack on, free wheel it and see what happens shall we?

First look at the box and it’s a plain, tidy affair. Translucent plastic box, fair bit of weight in it too. The Hengja is metal after all. Though that name, am I missing something there? I don’t know if its just me but I see that name and I think Swedish furniture company. So I had to google it and it would appear that it is old norse / current Icelandic meaning “to hang.” Hmm.

Anyway, open the box and out it comes. The thing feels impressively solid. Its waaaaaaaaaay over kill for something that is only going to carry the weight of a pair of headphones. It’s nice though, feels nice in the hand. Good, simple yet solid construction and it’s all nicely finished, I think it’s that powder covered then heated kinda finish to it. Matte and slightly textured.

Fishing out the tools, to find a little Allen key. It appears that the central screw holding it all together can be loosened and then adjusted. I was going to stick it on a book shelf but I’m now thinking it could go at the side of my desk. Once you get the thing loosened up you can quite noticeably increase the opening size, you can also turn it round and have it clamping sideways (vertically) which could be handy I’d bet for some. However I stuck to the desk, I got it and tightened it up. Then it’s a case of screwing the main clamp bit. It’s dead simple but I would suggest that if you don’t need to increase the opening. Don’t untighten the central screw. It’s not that it was hard but it was to get it perfectly straight on tightening up.

Eventually I got the thing straight, clamped on the desk edge then tightened up. Took all of maybe 5 min? Now I have it casually hanging off the edge of my desk. Yey! It freed up a little desk space for me to fill with clutter. In use, it’s nice. It’s a hanger that you can sit headphones on. It’s a simple object and there is only so much you can say about it.

In terms of value I’ve seen some say “ooooh its super value” and others say the inverse. It is US$15 which is today £9.60 on MP4nation. Well is a tenner a lot for a little bit of metal, hmm I guess. I’m sure if these were being made in their millions the production costs would plummet quickly. The thing is they aren’t made in the millions so headphone stands tend to cost a lot. In some cases headphone stands are just insanely priced and therefor in comparison to them, a tenner can seem like a spectacular bargain. As dedicated headphone stands go this is one of the best value.

Conclusion: Ooooh so should you buy it, hmm I dunno. It’s nice and for proper headphone stands it’s really cheap, much cheaper than any other I recall seeing. Still it’s rather more than my ghetto mug tree solution. I think if I had one of those desks with a high shelf at its front, then a couple of these would be great, they look nice and could be really handy. So basically, it depends but doesn’t everything always depend. What you get here is a good, exceedingly solid, all metal headphone stand. For just under a tenner delivered I think that seems like pretty solid value to me.

So there you have it, it’s a good solid thing and it has in my opinion a good, solid value price tag 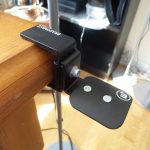