First off, this is going to be a real review and not a regurgitation of an Apple press release. This is why it’s coming now some weeks in, it takes time to use a service to play with it, to figure out how it works and how it meshes with you. It also should take time for it to get used to you, for it to learn what you like, what you don’t and how you want to use it. It’s a two-way street but let’s just hope that shall be a fruit full one. With that said, lets plough onwards and see what it’s like shall we.

Logging in the first time, card details duly updated so that should I forget to cancel it it’ll start billing me automatically. (Though I note that apparently US$10 is the same as £10 to Apple.) Still it’s a 3 month free trial so that should be easily ample time. That done I’m presented with a bunch of red circles. They each have music types, such broadly sweeping one word titles. I mean just what is “world” music? Do they mean hippies in a forest banging sticks or some French lady, Gauloises barely clinging to her lips? These sorts of categories just ever make sense to me, why not use more descriptive terms like vocal centric, bass driven, slow and melodic, etc etc?

Ah next up some artists, this is much more constructive stuff. However clicking More Artists does essentially nothing, repeated pressings change a couple of names but it’s not worth the bother.

It is at this point I realise that it’s uploading my music collection currently in iTunes. There is about 60GB, I halt this immediately, frankly it would have been nice if it said it was going to do that, or better yet ask if I wanted it to.

Clicking in a playlist it recommends, “Chilled Out R&B” I click a track that I recognise. Nothing happens. 2 min later, still nothing’s happened. Hmm, I click another track. Ah, after a couple of min it starts to play so I try the first one again. Nothing. Am I missing something or does this suck? A restart later and 30 min in and I’ve still not yet seen a song that I recognise or heard anything I like. Have apple not used my “genius” information to find or suggest anything I might like? And what is with the painfully slow song skipping? I know I don’t have a great connection but it’s always lightning fast on Deezer and Spotify, are Apple’s servers getting hammered maybe?

I am not impressed. So not impressed. After tiring of trying to find playlists that don’t suck I search for a band I like, ahh there is a “band” Radio option. Cool, that should play stuff like them right? Hmm Apple, it seems, have gone to the bother of putting the “F you Google plus” song from YouTube on here. Apple this is screaming childish and petty.

It works in iTunes so, OSX and widows are covered. Phone wise, no Windows, Android they say is coming but it’s not yet. iOS has it but only on 8.4 and later so you must have one of the up to date versions. Unlike every other service, it doesn’t work just through a browser. In short, a computer or and iPhone is what you need. Even Apple TV doesn’t work with it, its promised to be coming, like the Android app this autumn which is nice and narrow a time frame.

They claim to have millions, over 30 million they say. I’m sure they do, though if its 30 million songs you don’t like, they do have things I like if I search for them but it just seems so reluctant to play anything I actually like. It doesn’t have to be old songs I know, just anything that doesn’t have me thinking “what the F is this S” and hitting the next button. Though I’m told Taylor Swift is on there if that matters to you.

If I actively search for something specific it is mostly always there, although I should note that the search feature is rubbish. If you accidentally typo something it offers you nothing. It tells you that nothing was found and that’s it. No suggestions close to what you typed.

Having previously played with Tidal and its lossless quality I had mixed hopes about the Apple offering. They claim the output will be 256kbit AAC files. Now that should be mostly good enough. However, more than once even through my speakers the treble was a scratchy mess. While my speakers aren’t rubbish they don’t hold a candle to the headphones I have and I’m a little bit shocked. 256bit AAC should be good enough that I can’t notice high-end breakup just with the speakers. Have they done something to the tracks? Maybe tried to bump up the volume, dynamically compressing and flat lining acoustic spikes as is often found in the treble ranges?

Otherwise known as iTunes. Honestly I wish they were separate applications as they seem to blend a little too much but I guess this is what Apple want. Anyway, since this is not an iTunes review, I’m not going to comment on it really, you will have used iTunes before. The consensus seems to be that Apple fans think it’s great, anyone who uses windows seem to think it’s an abomination that needs to killed with fire.

Unlike every other music streaming service Apple music insists you use iTunes on a computer. No browser support. That has plus points like my hard-coded play / skip buttons working with it but it means you must install the bloated beast that is iTunes.

Apple have said that an android version is coming. They however are fairly closed lip about when that may happen.

Well the app it fine. The service is still awful.

It’s Apple and they don’t play nice with others.

Well in theory it has a huge range and when I manually search for things it’s got loads of stuff. It’s highly varied too like the acoustic master piece that was “***** You Google Plus”

I say in theory because in use it’s seemed to me to have a very clear intention that I would like what is profitable for them and therefore they were going to keep throwing it at me until I grew to love it.

Well it’s poor. It costs vastly more in the UK for no good reason and on that basis alone I’d tell them where they can go. Granted the Family plan is slightly less bad value. If you’re in the US then the value is much better. I still wouldn’t buy it though, a bucket of sh*te is still a bucket of sh*te no matter the price.

I should be writing more words but frankly, I can’t be arsed. The service just sucks. Like Apple are so fond of doing, they act like they know best and they are going to give me what they think I should like, not what I want. Maybe if I had no idea about the range of music out in the world then maybe that would work.

However I do know what’s out there, I like lots of things but Apple music consistently opted to throw crap at me a hated. How I don’t know. It’s like they looked at my iTunes playlist that is regularly uploaded to the mothership and said, okay here’s what he likes. Let’s not play anything like it.

So would I pay for it? No. It was terrible quite frankly and this review accelerated because I traditionally use a reviewing thing while I’m writing up said review. I want it gone, I am growing to loathe it and will be glad to see the back of it. Apple have another Ping on their hands with this one. 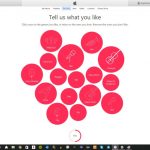