Today (September 11th 2017) Xiaomi somewhat surprised the tech press by unveiling a trio of devices, the Mi Note 3, the Mi Mix 2 and the Special Edition Mi Mix 2. These are all updates to prior devices and not new, but that doesn’t stop them being exciting. 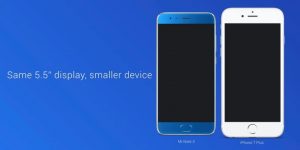 Starting off with the Mi Note 3, something I don’t think is getting enough attention. The Mi Note 3 what happens when you take a Mi6, and then put it through the photocopier at 1.5x . That’s not quite true, but visually, you’d be hard pressed to tell them apart if they weren’t side by side, they’re that similar. Internally, the Mi Note 3 has a 5.5″ 1080p IPS screen, much more meh than last years 1080p curved OLED screen. Whilst last years screen wasn’t the best, it was proof that someone other than Samsung was giving OLED a shot, and that is just not the case this year, back to IPS, oh well. Next up is the processor, the Snapdragon 660 is not the 835, as you may have noticed, and good job. the Mi Note 3, despite the last 2 incarnations being flagships, does not use a Flagship processor from Qualcomm. The 660 is not bad by any means, in fact, the Kryo 260 cores in the 660 are modified A53’s with some of Qualcomm’s special sauce, and from everything I’ve heard, it’s a force to be reckoned with, but once again, compared to last year, it is a step down. Something that is nice is the 6GB of RAM on all models, regardless of storage capacity, this is nice as some OEMs have started to hold the higher storage capacity hostage by pairing more RAM with them, speaking of which there is 64 or 128GB of Storage. Since we don’t know for sure, I’m going to speculate that this device will use eMMC instead of UFS, since everything else on this is a step down from last year so far. The Mi Note 3 brings the Dual Camera’s from the Mi6 forward, so one “normal” 12MP sensor and the other is a telephoto lens if the performance is similar to the Mi6 it will be okay, but far from mind-blowing. Lastly, the Mi Note 3 has a USB-C (ver. 1.0) charging port with Qualcomm’s Quick Charge 3.0 support, to fill up the Mi Note 3’s 3500mAh Battery. 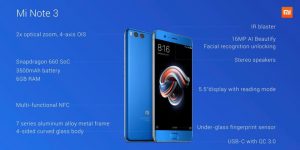 Next up is the Mi Mix 2, the actually exciting phone Xiaomi announced today. The Mi Mix 2 build on Last year’s Mi Mix and also makes it more down to earth, this is still a concept phone that you’ll be able to buy, and hopefully, more people will buy this one. Starting off with the screen, the biggest change. Whereas the Mi Mix had a 6.44″ with an odd resolution of 2040×1080 and was pretty much bezel-less, so much so that there wasn’t room for the traditional sensor set at the top of the phone, so Xiaomi got rid of the earpiece and replaced it with a Piezoelectric vibrator, that vibrated the entire screen and chassis to create sound, It got rid of the Infrared proximity and ambient light sensors and replaced those with ultrasonic ones, and lastly the front facing camera was moved to the bottom right of the screen, meaning the top, left and right sides had pretty much no bezel, and the small sliver at the bottom was for the front facing camera. In theory, those are awesome changes, but in practice, the piezoelectric earpiece was tinny, thin and overall not as good or as loud as a traditional one, so they swapped it out this year for a more traditional one nestled very neatly between the chassis and the screen, similar to what Essential’s PH-1 did. The Ultrasonic proximity sensor and ambient light sensor stayed though, which is awesome. Lastly, that camera stayed at the bottom but they improved the lamination so that it is harder for you to see the lens, but the lens has just as easy a time looking at you, neat.

So what next? well, the screen actually, the biggest bit. it went from a 6.4″ screen to a 6″ one, and from 2040×1080 to 2160×1080. the smart ones among you have noticed that the newer Mi Mix’s resolution is 2:1, which is correct, the Mi Mix 2 has a 2:1 screen and I’m loving it, sadly, just like with the Mi Note 3, this is still an IPS one, but hey, you can’t win everything. The screen is covered by a nice big slab of Gorilla Glass 5, the frame of the Mi Mix 2 though has changed a bit. Whereas the old Mi Mix had a full Ceramic back and a separate Ceramic frame, the Mi Mix 2 has a Ceramic back with an Aluminium frame, this is what makes the Mi Mix 2 easier to hold than  last year… Unless you buy the Special Edition, which has a Unibody Ceramic frame, because, sure, why not.

The Mi Mix 2 has a 3400mAh battery and a USB-C port (ver. 1.0) with Quick Charge 3.0, just like the Mi Note 3. At this point, a flagship should really start integrating the newer features of Qualcomm’s flagship processors, such as Quick Charge 4.1, but alas, here we are. the Mi Mix 2 also has between 64 and 256GB of internal storage and either 6 or 8GB of RAM, and a metric butt load of radio bands, 37 in total and 22 of those are LTE bands, meaning in layman’s terms, wherever you bring the Mi Mix 2, you’ll more than likely be able to use it on a normal phone network and still have functionality, there are even some reports of US reporters being able to get T-Mobile’s VoLTE and WiFi calling features out of the Box, which is pretty neat.

We’ll post links to GSMArena if you want to check out the entire Spec list yourself, but now, enjoy some photos. Mi Note 3 & Mi Mix 2 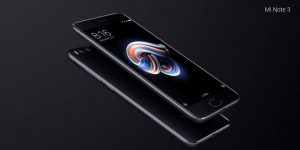