Apple’s customary September event is usually the event in which the brand launches its iPhones with an October event featuring iPad’s but this year due to COVID 19, Apple delayed its launch however it still had plenty of hardware to show off.

The first thing that was announced in the Apple Park launch was the updated Apple Watch Series 6. It is an incremental upgrade on the Series 5 however it is a worthwhile upgrade for those on an older device such as a Series 2, 3 or 4. Blood Oxygen measuring is a new addition which will allow you to measure the level of oxygen present in your blood at any time with just a 15-second test, with periodical testing also being carried out. 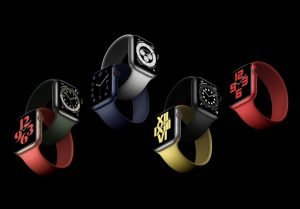 Apple is partnering with multiple educational facilities and institutes to launch research studies including asthma monitoring, heart failure monitoring and COVID 19. The Apple Watch Series 6 features the new S6 Apple SoC which is based on the A13 Bionic. It is 20% faster than the S5 featured on the Apple Watch Series 5. A brand new always-on altimeter is also present on the watch. The display is also 2.5x brighter in the always-on mode outdoors.

A brand-new Family Setup feature is built into cellular Apple watches running watchOS 7 from Series 4 onwards. This is the first time that iPhone owners are able to set up Apple Watches on behalf of other family members that do not own an iPhone. This is being pitched as perfect for children and elderly family members as it allows them to benefit from the important health and safety features of Apple Watch, like Emergency SOS, while Maps, Siri, Alarms without needing an iPhone.

There is plenty of new bands but the standout band being pitched by Apple is the Solo Loop Band which is a single piece of silicone which slips onto the watch wearers wrist rather than relying on a buckle or clasp. A braided version of the solo loop is also available with the same single-piece design.

Apple also launched the Apple Watch SE which is a variant of the Series 6 which takes its best features and envelops them within a budget-friendly price point. It features an S5 SoC which is still 2x faster than the Series 3, an integrated compass and always on altimeter, family setup, sleep tracking, fall detection and the same display as the S6. 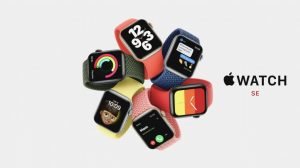 The Apple Watch Series 6 and Apple Watch SE is available from this Friday with the 6th generation watch starting from £379 whilst the first budget-friendly variant is priced starting at £269. The Series 3, however, is still being sold with Apple for the foreseeable future which is fairly confusing however it’s even more affordable price point beginning at £199 puts it closer to competitors such as Fitbit, Garmin and Samsung’s smartwatches. 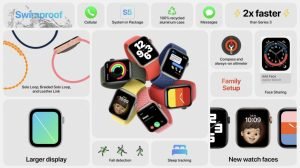 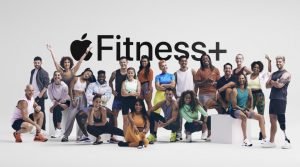 You are able to watch the workout routine on your iPhone, iPad and Apple TV with the Apple Watch being used to accurately track the fitness activity of the wearer. This is a very similar approach to the Peloton application available however the majority of the fitness routines require just a set of dumbbells to carry out eliminating an additional major purchase. It starts at £9.99 per month or a yearly subscription for £79.99 with a one-month free trial available for current watch owners and new watch owners get a 3-month trial. 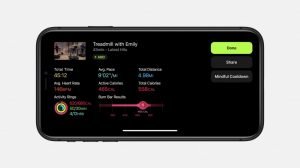 Apple used this event to launch a combined subscription service called Apple One which is a combination of its current subscription-based services in a single monthly payment. Apple’s line-up including iCloud, Apple Music, TV+, Arcade, News+ and Fitness+ are all available as part of this new plan.

The individual plan includes Apple Music, TV+, Arcade and 50GB of iCloud storage for £14.95 a month offering a £5.80 monthly discount in comparison to paying for the subscriptions separately. The family plan allows up to 6 users access to the aforementioned services with the exception of an increased iCloud allowance storage at 200GB. Lastly, they have the Premier plan available at £29.95 with 2TB of iCloud of storage, News+ and Fitness+ alongside the ability to share the subscription with 5 other users.

The iPad was the next major section in the September 15th keynote. Apple spoke a bit about how it has now been 10 years since the first iPad was brought out, with over 500 million iPads sold since launch. It also flexed the fact that 53% of iPad buyers are first-time owners and that it has consistently been #1 in customer satisfaction since it launched.

The standard iPad was the first one to be updated. It now features the A12 SoC compared to the A10 featured on the previous 7th generation iteration, it features the neural engine for the first time on this line-up whilst also continuing to be compatible with the full-size Apple Smart keyboard alongside Logitech’s offerings. This minor spec bump was exactly what this device needed with its previous processor lacking slightly when using more demanding applications and better multitasking capabilities. Its price point remains the same at £329 for the 32GB model and is available in Space Grey, Silver and Gold as previously offered.

The iPad Air received the biggest overhaul with a new design based on the 2018 iPad Pro with an all-new 10.9” ‘edge to edge’ display. It is now available in a range of 4 new colours; Rose Gold, Sky Blue, Green, Silver and Space Grey. The iPad Air 4th Generation features a brand new Touch ID sensor on the top button which was previously known as the power button and it features a brand new design to ensure secure authentication whilst retaining the speed and accuracy that users of Touch ID are used to. It wasn’t made clear whether this is based on the first or second-generation Touch ID sensor. 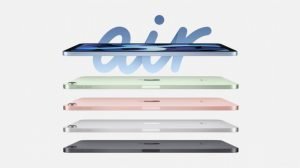 The 2360 x 1640 display is fully laminated an features an anti-reflective coating, True Tone technology and P3 wide colour gamut. It also now features a brand new A14 Bionic processor which is the same that we expect to feature on the upcoming iPhones. This indicates that the iPad Pro devices next refresh will feature X or Z variants of this chip. The chip is based on the 5nm process node, featuring 11.8bn transistors, offers 40% faster CPU and 30% faster GPU performance when compared to the third-generation iPad Air.

Apple showed their processing prowess by simply informing us that a similarly priced Windows 10 powered HP laptop is 50% slower than the 4th gen iPad Air whilst being many times thicker and heavier. The iPad Air features USB C charging and connectivity with a 20W charger included inside the box whilst the standard iPad retains Lightning charging but includes a USB C to Lightning cable and USB C brick inside the box.

The iPad Air 4th Gen offers the same 7MP front-facing camera in the same bezel as the 11” iPad Pro, however emits all of the other sensors present on the premium model. The rear camera is identical to the 2018 and 2020 iPad Pro’s main camera sensor and sits at 12MP. Stereo speakers are also present in landscape mode alongside support for the Apple Magic Keyboard and Apple Pencil 2nd Gen.

Apple touts the environmental credentials of both iPads including a 100% recycled aluminium enclosure, a lack of BFR, PVC, Beryllium and Mercury and 100% recycled tin used in all of the solder on the device. This is part of a long list and Apple’s final goal is to have 100% carbon neutral products by 2020. 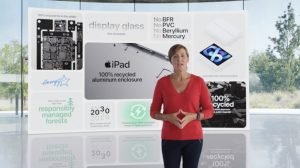 Lastly, Apple announced the release of iOS 14 which was announced back in June however we never ended up releasing our coverage for that event.

Overall Apple announced some decent upgrades to their line-up with the iPad Air receiving the largest upgrade but our eyes are peeled for the next announcement which will likely feature the 2020 iPhones. Stay tuned for our full coverage of that event exclusively here at www.mobiletechtalk.co.uk