On what was basically the last “press” day at IFA, Huawei had their main event, showing us what will be powering their next flagship phone, the Kirin 970 (of which we also go a teaser for). 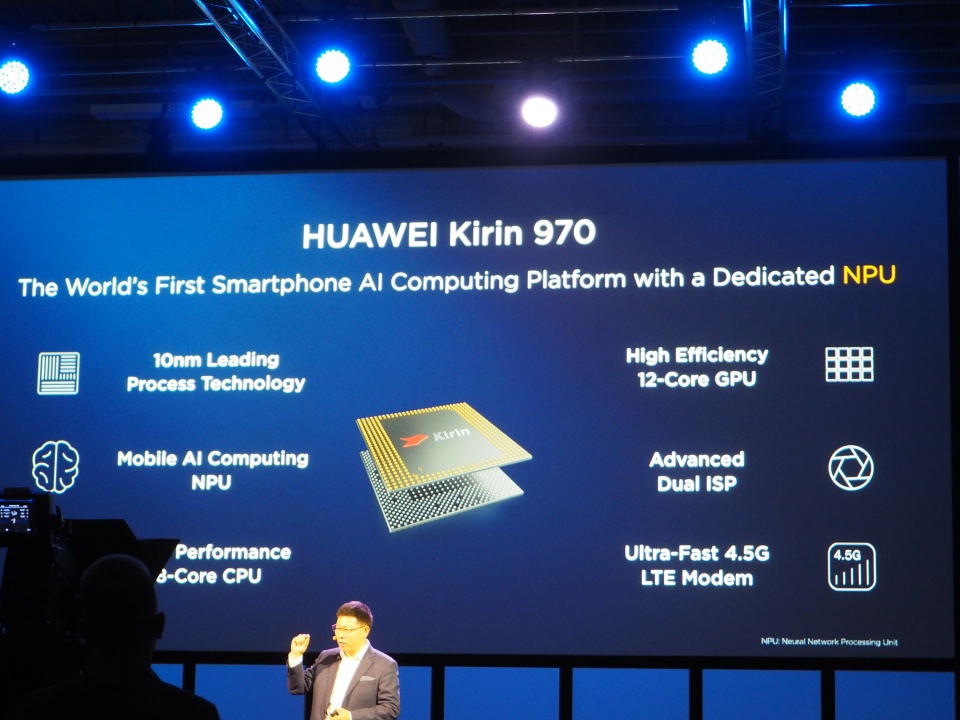 Let’s get some of the quick specs out of the way first, so those that are only here for that can get their fix:

Now that that is out of the way, we can talk about some of what makes the Kirin 970 so interesting, I won’t touch too much on AI and the NPU as we’ll deliver more info on that laters. Starting with the Core design the 970 keeps the A73 and A53 setup, with 4 of each. I’m not the biggest fan of this because I would have hoped we would have moved on by now, if not to a full DyanmIQ A75 and A55 set up, even an A73 and A35 one. The A53 is an aging core, and one that I feel deserves to be retired by now. 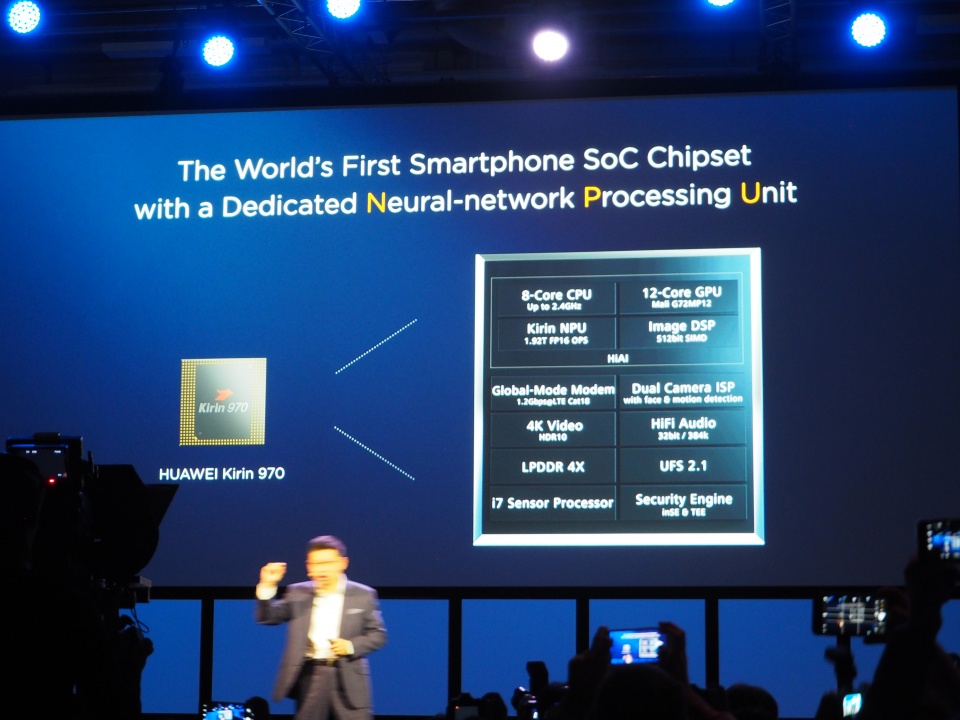 Moving on to the GPU, last year HiSilicon and Huawei were the first to use the Mali G71 core, the first in the Bitfrost family with an 8 core setup. This year, Huawei is the first to utilise the G72, the newer Bitfrost core, and instead of an 8 core set up you get a 12 core one. I cannot pretend to know much about the Bitfrost architectural changes between G71 and G72, so I will link to an AnandTech article about it, as they are a very trusted site. Sadly, whilst Huawei is very forthcoming about what GPU core they are using and what core count they have, Huawei has not yet stated the clock speed of the G72-MP12. This once again is kind of annoying, as Huawei stated the clock speeds of both the CPU core clusters, and was incredibly detailed about the LTE modem in place. 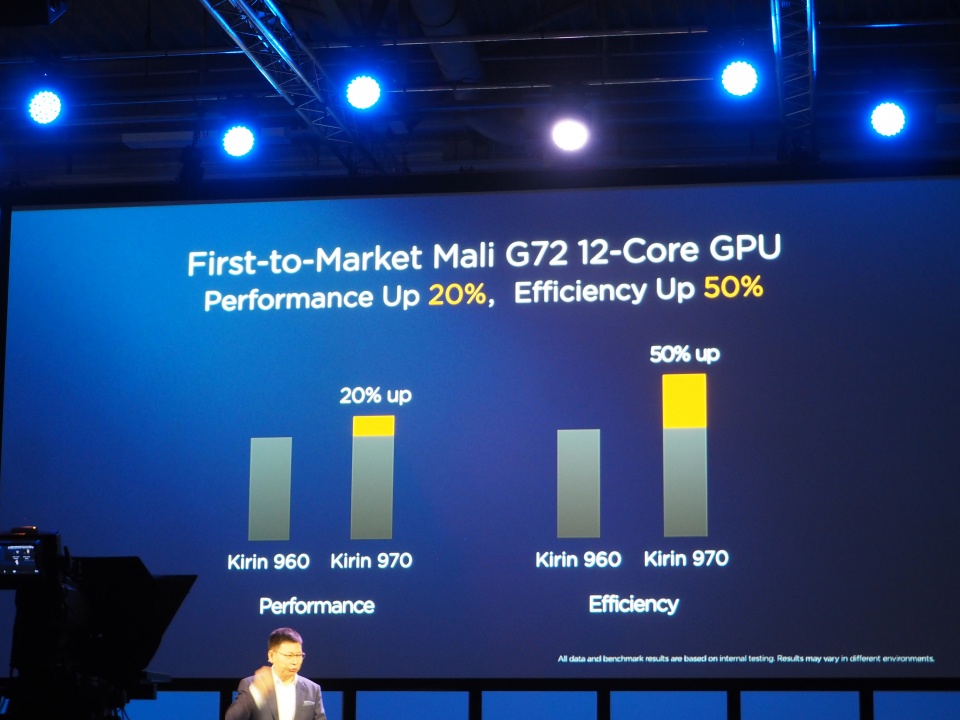 I’ll quickly note that the Kirin 970 is using TSMC’s new 10nm FF+ manufacturing node and as far as we know, the Kirin 970 is the only SoC outside of Apple’s A10X Fusion Chip to be fabricated using this method. Now this isn’t entirely out of the picture, as Huawei was one of the first to also utilise the 16nm FF+ for the Kirin 950/955 and the 16nm FFC for the 960, but nevertheless, it is interesting that Huawei is now also in the ring with the other players at the 10nm ground, for whatever that is worth to you as a consumer. The benefit from going from 16nm FFC to 10nm FF+ is pretty obvious; you’re going to have a smaller size die, a whopping 40% size reduction according to Huawei, this is pretty damn impressive. The CPU cores are also 20% more efficient than last year, which is impressive, given that they’re, architecturally the same core. Now the GPU cores, those are downright insane. despite gaining 50% more cores, the CPU portion of the Kirin 970 is actually 50% more efficient according to Huawei. some mighty impressive stuff both on ARM’s end with the G72, TSMC’s with the 10nm FF+ and Huawei’s with the overall package, good job everyone. 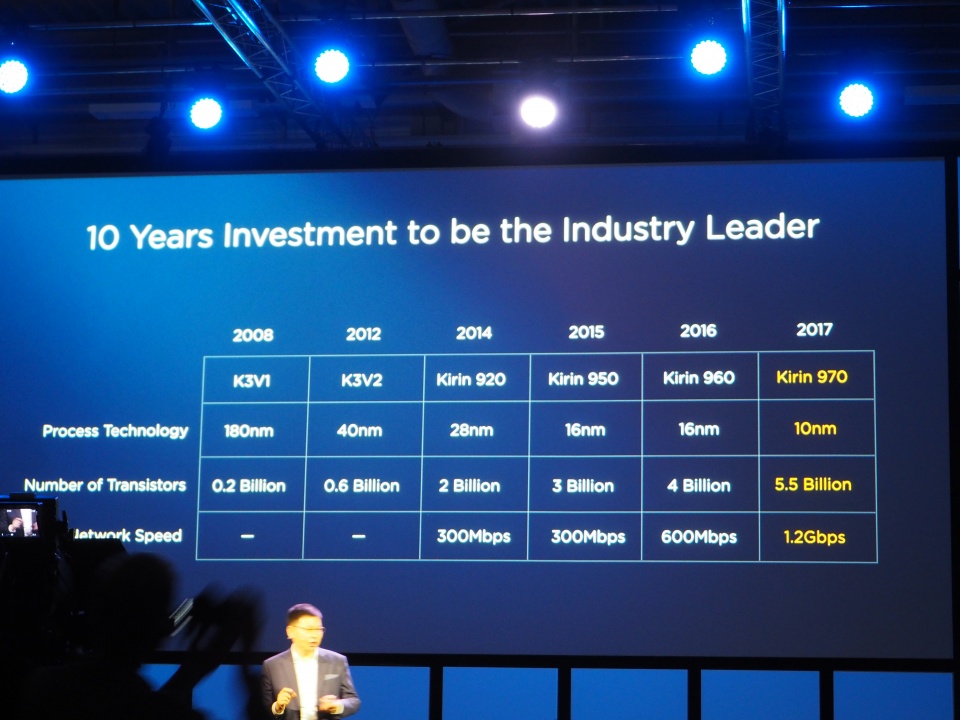 Lastly, I want to quickly touch on the modem part of the Kirin 970, because it is bananas, b-a-n-a-n-a-s (Sorry, I couldn’t help myself). The Kirin 970 is, as far as I know, the world’s first Category 18 LTE Modem. This modem has support for 4×4 MIMO (Multi-Input, Multi-Output) 5CC Carrier Aggregation (3xFDD, 2xTDD) and lastly, support for 256QAM (more bandwidth) meaning the Kirin 970 has a theoretical downlink speed of 1.2Gbps. This.Is.In.Sane. The latest modem in the Snapdragon 835 is Cat.16 as far as I know “only” enabling up to 1gbps (only being, of course, the loosest definition of the term). These radio enhancements are awesome, but very few people will ever be able to use 1.2Gbps on their phone, seeing as pretty much no current network supports it. Something we can appreciate though, is the smarter and faster handoff feature, so when you’re switching between radio masts, when you’re on a high speed train or as a passenger in a car, when you hop between radio stations, you have a much more seamless experience.

This was just a very brief talk about what Huawei showed at their IFA 2017 Keynote on the Kirin 970 chipset. I’m sure we’ll learn more on October 16th in Munich when Huawei announces the Mate 10 and Mate 10 Pro, both of which will be running this chip.