Today in London, Honor has launched the Honor 10 Lite, the follow up to the massively successful Honor 9 Lite and as its name suggests, the lower end of the flagship Honor 10.

The Honor 9 Lite has been the top-selling SIM free throughout the holiday period, not just on one site either. Carphone Warehouse, Amazon, Very; the list goes on. Honor isn’t standing still, they’re steaming ahead with the Honor 10 lite, and boy is it an upgrade.

The first thing you’ll notice is the “dew drop notch”. This teeny tiny notch is here to replace the one in the Honor 8X, which was already smaller than most. Whilst I didn’t have an issue with the notch before, this much smaller one is likely to be prefered by those who are still against it. Whilst it’s a much smaller notch, it can still be hidden in software if that is your thing.

The processor is massively updated as well with the new device utilising the Kirin 710. This is the same chip as the 8X, and the chipset that would have been flagship grade just a few years ago, so look how far we’ve come to get this performance in a £199.99 phone. The Kirin 710 has 4x Cortex A73 cores and 4x Cortex A53 cores. These aren’t the newest cores, but they aren’t slouches either. With 3GB of RAM and 64GB of onboard storage (with a MicroSD slot capable of taking up to 512GB cards), you should have enough memory and storage to get everything you need doing, done.

Design wise, the Honor 10 Lite is stunningly gorgeous. Whilst it looks like metal, it is indeed plastic which is one of the ways they got this price point, but I love the looks of the 10 Lite, especially in the Sky Blue colour which graduates from an ice white to a light blue. It’s very snazzy. There is also a Midnight Black and the Sapphire Blue that my unit is. Honor is trying to invoke the looks of their higher end devices here and I don’t blame them, but it does feel like it falls a little bit flat when you pick it up. 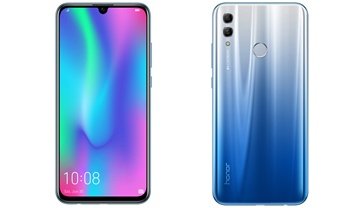 Camera wise, we’re looking at an AI-enhanced 24mp selfie camera, which, like the Honor 8X is able to do some pixel binning to make some amazing 6mp shots, though It does feel like the beauty mode has been aggressively turned up to 11 on the Honor 10 Lite, even when turned off, there still seems to be more processing being done. On the rear is the dual camera setup that Honor is famous for, the 13mp main camera and the 2mp depth-sensing camera. I’ve spoken about how I’m not a big fan of depth-sensing cameras on phones and would rather either a single better sensor, or a more useful secondary one, and the same rings true here.

I wanted to leave the screen discussion to last as it is one of the more impressive aspects of this phone, I spoke about the “dew drop notch” a bit earlier, but for those unsure, this is a new, much smaller notch which basically just houses the front-facing camera. the earpiece has been moved up into the frame, and the sensors are in the minute amount of black space between them. The screen itself is a 6.21″ IPS LCD with bright colours and actually remarkably good brightness and contrast for a phone of this price, it’s also ridiculously tall, at 19.5:9, the  Honor 10 Lite is getting closer and closer to the cinema 21:9 aspect ratio we all laughed at LG about all those years ago. With a resolution of 2340×1080, you’d think being stretched out to 6.21″ it would be an issue, but honestly, it isn’t. it’s more than dense enough for pretty much everything you need to do. Lastly, I want to speak about the chin, yes the chin. cheaper phones usually have small-ish side bezels but have a large bezel on the chin and the top, even if they have a notch, well Honor is using a tech called CoF, or Chip on Film, which places the screen smarts on a bendy bit of plastic, so it can fold it behind the screen, making the chin smaller, awesome!

Lastly, the battery. Honor has crushed it here, with a monstrous 3400mAh in this phone. a £199.99 phone with a 3400mAh battery, a power efficient but powerful chip, the only thing it is lacking is fast charging and USB-C. Yes my friends, this still uses MicroUSB. I will continue to call Honor and other OEMs out for the cheap move that is sticking with MicroUSB until they stop doing it. heck, you can even buy USB-C cables in Poundland now!

We Have an Honor 10 Lite in for review, expect it at the end of this week, we just have a few more things to tweak, but you guys, it’s pretty great.