Here at MWC 2018 we sauntered on over to the Archos booth to check out what they had to offer. They had quite the spread, ranging from phones and tablets all the way to electric skateboards and scooters! But one of the most eye-catching things was the Vision 215, a low cost, 21.5″ All in one PC, and it doesn’t look half bad, especially when you consider the price. 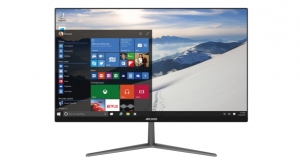 At €299, you get a 21.5″ 1080p IPS screen, which from my brief hands-on with the terrible booth lighting, looked really quite nice, the viewing angles weren’t the best I’ve seen on an IPS, but when you consider that some monitors alone cost more than this entire AIO, I’m willing to let it slide a little. Not only does it look nice from the screen point of view, the design of the Vision 215 is pretty dang nice too. The majority of the display portion is just 7mm thin; 7mm! Sure there is a bulge down the bottom where the components are, but it’s not a horrible look and blends quite well, I like it.

Spec wise is where the budget nature of the Vision 215 rears its head. Using an Intel Atom X5 -Z8530 and integrated HD400 graphics, the Vision isn’t going to be your next video editing rig, but for browsing the web, maybe some document editing and YouTube, the chip inside the Vision 215 should be plenty. The presence of LPDDR3 RAM makes me think that this RAM is soldered onto to motherboard and not socketed in standard DIMM or SO-DIMM slots, which is a shame, but until I get one and pop the back off I cannot comment for sure. Lastly, there is 32gb of eMMC storage on here which is once again, budget. Windows 10 64bit will run on 32gb “SSD”s but it isn’t happy about it, and Archos knows this, so it included a 2.5” SATA-III Slot capable of taking any SATA HDD or proper SSD, something like the MX500 from Crucial.

I/O wise the Vision 215 is actually pretty good, with 5 USB ports, an RJ45 port for hardwiring into your internet. They wouldn’t tell me if its 10/100 or gigabit, but from their silence, I’m going to assume that it is 10/100 to keep the costs down. A MicroSD card reader is next, and it doesn’t make sense to me on a product like this. There is more than enough space for a full-sized SD card reader, MicroSD makes little to no sense. Lastly, there is a 3.5m headphone jack and an HDMI out, sadly there is no HDMI in, meaning that once the electronics in this AIO become outdated, you cant use this as a display for another computer, what you get now is what you’ll have from then on.

Moving on to the other things on display, I checked out a newer version of the Sense 55s, the phone that made me and Craig giddy at IFA last year. The really quite bezelless phone from Archos still seems to be in development, and this unit is far better assembled than the one we saw at IFA. Less creaking, less flex, smoother software, a more uniform backlit screen etc. Sadly they still would not give me a price or release date, so I guess I’ll keep badgering them until they block me or send me a unit, one of those will happen right?

There were a lot more phones and a few tablets at the booth, but honestly, they’re not really worth talking about. The Sense 55s got a mention as iit’ pretty different, but also something updated from a device we’ve already seen.

Lastly, I want to talk about the electrified scooters and Skateboard at the booth which is all part of Archos’ “Urban transport” initiative. In places like London and Paris, where driving is becoming less and less viable, as well as more and more expensive, these devices give you a mix of the benefit of electric vehicles, being that they’re cheap to run, low maintenance, and silent, and the benefits of personal transport like a bicycle, skateboard or scooter.

Starting with the Scooters, there are actually 4 of them, the Bolt, the Bolt Jr, the Citee and the Citee Power. The bolts look more like traditional scooters, with smaller wheels and less clutter on the controls, whereas the Citee and Citee power have chunkier wheels, and the more traditional “twist and go” accelerator you see on mopeds and motorcycles.

Starting with the Bolt and Bolt Jr, the only real difference between these two is range and speed, with the Bolt capable of going up to 20kph and traveling between 7 and 10km on a single charge, and the Jr cutting the speed almost in half with a 12mph top speed, and same with the range, 4-5km per charge. the charging times are about an hour different with the Bolt Jr taking 1-2 hours and the Bolt taking 2-3 hours. both are relatively light at around 8kg and look like they’d be a nice bit of fun.

The Citee and Citee power though, are the more expensive and more powerful devices. The Citee can do 22-25kph speeds, which is pretty damn nice, and can travel 10-12km on a charge, and takes 4-5 hours to fully recharge from dead to full. The Citee Power on the other hand, does 25kph, and 18-22km per charge, but because of the way the batteries are architected, the Citee Power only takes 2-3 hours to fully charge, making longer trips and taking less time to recharge, sounds good to me!

Lastly is the Electric Skateboard, the Archos SK8, yes Skate, but spelled SK8, like that Avril Lavigne song. Now that that is out of the way, there is a 150w hub motor in the rear left wheel, capable of propelling you along at 15kph and does between 5-10km on a charge, and taking 2.5 hours to charge. The SK8 comes with a carrying handle carved out of the deck, but apparently, the strength of the deck was barely, if at all, compromised, which is nice to hear.

This is all we thought was worth reporting on at the Archos Booth, but catch up on the rest of our MWC 2018 coverage.