Tim Cook starts the 2018 ‘iPhone’ event with a brief history of the company and its product line. The introductory period is about Apple Retail which is sort of traditional since they have been doing this for the past couple of years now. There was also the highlight statistic that Apple is about to ship their 2 billionth iOS device.

Apple Watch was the first product line to be mentioned in the keynote. It has been identified as not only the number 1 smartwatch in the world in terms of popularity, but also the number 1 watch in the entire world. It has been redefined with 3 main pillars of use, ‘Staying Connected’, ‘Living an Active Life’ and ‘Keeping Healthy’.

The Apple Watch Series 4 was announced with new 30%+ larger 40mm and 44mm displays whilst becoming slimmer. The watch faces were updated as always with support for up to 8 complications, the digital crown has now been reengineered to have brand new haptic feedback when moving the dial, and the Apple Watch Series 4 speaker is now 50% louder with the microphone below the digital crown to ensure the feedback from the speaker is as minimal as possible.

Black Ceramic and Sapphire now line the back which also helps cellular connectivity. Apple’s S4 processor is now 64 Bit alongside being dual core claiming up to twice the performance increase. One key feature that Apple touted was the ‘Fall Detection’ which means the new accelerometer and gyroscope can detect if you fall over and will allow you to contact emergency services if required. There is also a failsafe which means that if the Apple Watch doesn’t get a response within one minute then it’ll automatically contact them.

ECG’s are now possible thanks to the FDA approved technology built into the digital crown and crystals on the back. This is the first consumer over the counter product allowing this functionality. Atrial Fibrillation which is a heart condition which means an irregular and abnormally fast heart rate can also be detected by the Apple Watch. So many people that would go undiagnosed will now receive information about potential heart issues. The huge amount of health and fitness data available from the Watch is encrypted on device but is also stored encrypted in Apple’s servers, confirming GDPR compliance.

The iPhone line is the main focus for this event and Apple firstly informed the audience that the iPhone X was the number 1 rated smartphone in the world with a 98% customer satisfaction rating.

The iPhone X[S] and iPhone X[S] Max are the names of the new flagships. The phones come in 5.8” and 6.5” 120Hz screen sizes respectively. Both phones come in surgical grade Stainless Steel (silver), Space Grey and a new Gold finish which looks very like the Blush Gold we saw plenty of leaks of. 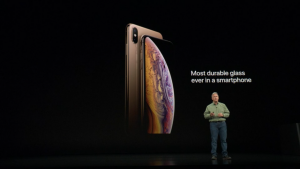 Both phones have the Super Retina display with 458 PPI (Pixels Per Inch). The OLED display also supports Dolby Vision and HDR 10 with deep blacks and a new wider sound stage. The iPhone X[S] and X[S] Max also now has the most durable glass in a smartphone ever according to Apple. There is also a 60% greater dynamic range on curved OLED panel.

Apple also upgraded the audio with a much wider sound stage so both recording and playing back audio will be more immersive. Face ID was also updated with a much faster response time but the exact time was not quantified and it is more of an improvement than a generation change.

Core ML which is Apple’s machine learning platform will now be up to 9 times faster whilst using up to 1/10thof the energy.

The iPhone is the worlds most popular camera with the X[S] and X[S] Max having dual 12MP Cameras on the rear in a vertical orientation. The wide angle is f/1.8 and the telephoto being f/2.4. True Tone has also been updated for better colour accuracy. The front facing camera has also seen a spec upgrade with a new improved 7MP sensor and improved IR camera and dot projector.

The image signal processor now works with the neural networks built into the A12 Bionic chip to enhance the photos and the main benefit of this is seen within smart HDR which combines a 4 second buffer and long exposure shot to create the best possible combination. 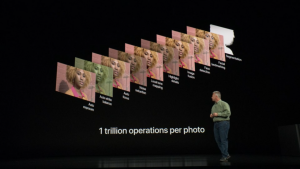 Apple has now allowed access to modify the bokeh level within the photos app allowing an f stop as low as f/1.4 and as high as f/16.

Some other key features included gigabit class LTE connectivity, the best worldwide roaming on a smartphone. Dual SIM was a big feature touted in the leaks but the way Apple has chosen to go about this is by using an ESIM for the secondary SIM card and this will be across the line-up. China is the only exception where there will be dual physical SIM slots due to the lack of availability of ESIM support. iOS will show primary and secondary when you receive calls based on the number you have identified it as. 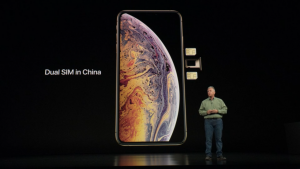 They took a brief break to talk about Apple’s commitment to the environment and reiterated the fact that every part of Apple is powered by 100% renewable energy but whether that include the production of devices is unknown. 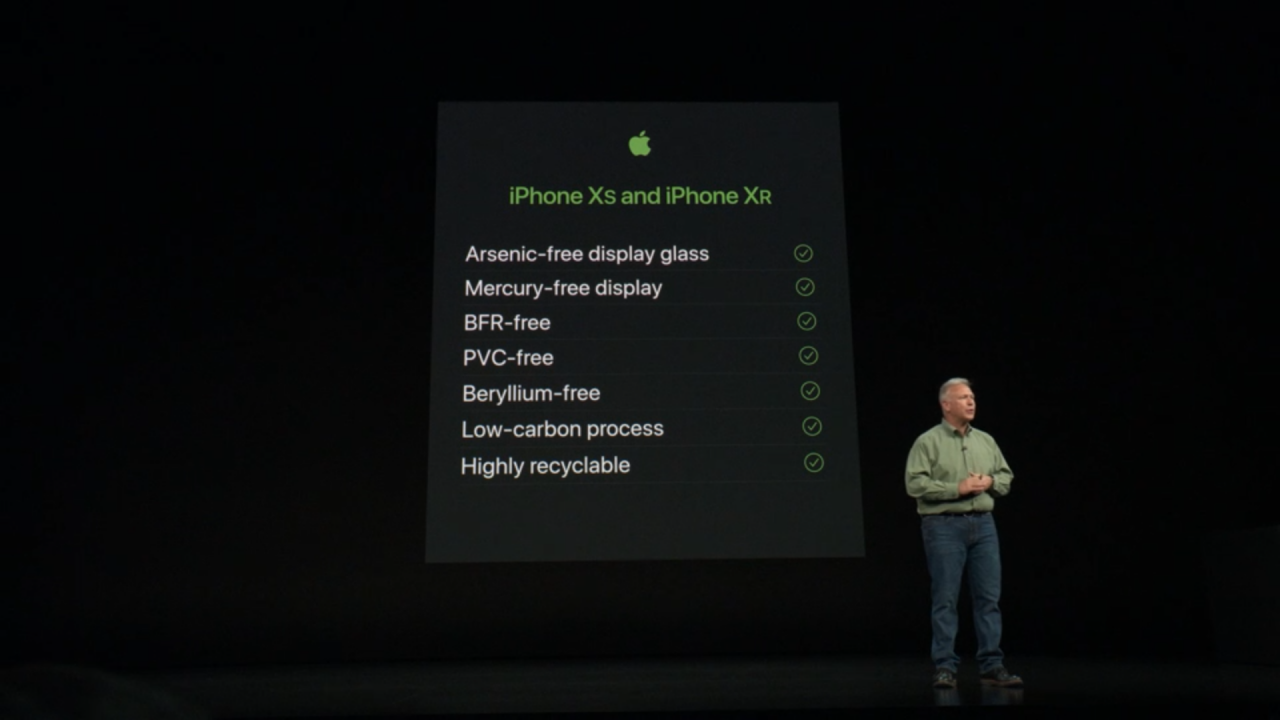 Apple mentioned the iPhone X[S] and iPhone X[S] Max have recycled tin logic boards with the speaker enclosure being made from 30% recycled plastic.

Daisy which is Apple’s disassembly robot can now disassemble 9 models of iPhones and Apple talked about their GiveBack program which mentioned they will give users the value of their old device if it could be used by somebody else or if it isn’t useful then they would recycle it properly. Apple wants to stop mining new materials from the earth so want to recycle as much as possible.

Finally came the so-called budget iPhone we were expecting. Almost a phoenix reborn from its ashes of the iPhone 5C with a similar colour lineup. The iPhone X[R] was released with the form factor of the iPhone X with 7000 series grade aluminium in Black, Blue, Coral, White, Yellow and Product Red colours. The iPhone has an LCD ‘Liquid Retina Display’ which is 6.1” in size, a 326 PPI sharpness with the same 120Hz refresh rate. Tap to Wake and the A12 Bionic but 3D Touch is missing and is replacing with Haptic Touch which is the same as a long press which does seem somewhat of a step back since it means developers are less likely to take advantage of it. Face ID in its updated form is also present on the X[R]

iPhone X[R] doesn’t have a dual camera setup but shares the same 12MP primary wide angle lens as found on the premium flagships. This shares some DNA with the Pixel with its single lens as Apple has now implemented software Bokeh with person detection aided by the Neural Networks to help blur the background properly rather than just a software gimmick seen in many low cost smartphones.

The Homepod saw a small update with Airplay 2 which helps you to create stereo sound alongside fantastic multi room support. The Homepod will now be able to set multiple timers at the same time, make phone calls, help you to find your iOS devices just like you would using Find My iPhone on a computer but this is much more handy. You can also create shortcuts which will be available in an update on Monday 17thSeptember. TVOS will also see a Dolby Atmos update on the same date too.

Mac OS Mojave has now also been given a release date of the 24thSeptember.

The event was packed with lots but still no update to the long outdated MacBook Air but maybe that’ll come in October.  Stay tuned for our coverage of these devices.