Here in Berlin for IFA we got a chance to look at some of the stuff that Acer had on show, one of which intrigued us, the fact that these new Laptops (the Swift 5 and Swift 7) Use the 8th gen refresh chips from Intel, the Amber Lake and the Whiskey Lake parts.

The Swift 5 is a pretty interesting Machine, Acer was calling it the lightest 15″ Laptop in the world, and at 990g, I’m inclined to believe them. But the interesting part is that Acer is once again one of the first companies to use the new chips, in the case of the Swift 5, the Core i7-8565U, which is part of the new Whiskey Lake series of chips from the Kaby Lake refresh. 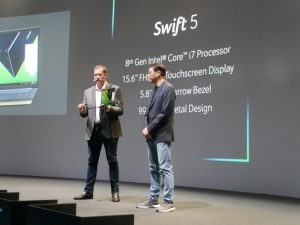 The Swift 7 is a little harder actually, We haven’t been able to get concrete information on what processor this uses. If we are speculating though, I would assume it’s using the new 5w Amber Lake stuff, which can be thought of as the newer version of the Core M initiative, which is full-fledged Core CPU (as in, it’s not Atom) but with highly dynamic frequency scaling, meaning it can be put in fanless designs. The reason I am thinking like this is that the first generation of Swift 7 did use Core M, for the fanless aspect of it, and despite the performance deficit of using these chips, Acer’s implementation of them is usually one of the better ones, so I’m not actually too worried about the performance if it does end up using Amber Lake. 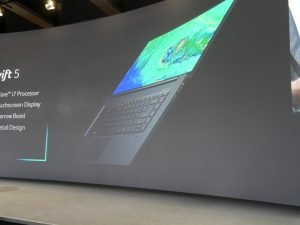 For those of you not perfectly in line with Intel’s “new” processor lineup (honestly, it’s hard for those of us that do pay attention sometimes) I’d recommend you go have a look at AnandTech’s full breakdown Here . But if you just want to know the top level stuff, Whiskey Lake is still Kaby Lake, still 14nm++, the Core microarchitecture is the same, but Intel has managed to get an extra 600Mhz on the Boost clocks, seriously, that’s it. Intel has done some work on the chipset side though, bringing in the USB 3.1 controller on chip, meaning that vendors no longe3r need discrete USB controllers. This along with the faster and better-integrated WiFi controller (802.11ac) on Whiskey Lake, as well as a new option for having an LTE modem, though that is still not as integrated as it is on this like the Qualcomm Snapdragon Always Connected PCs. 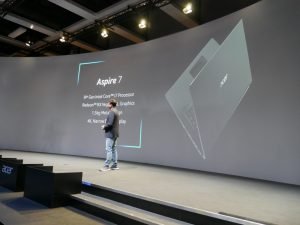 Acer was very happy to tell us about their new 4th gen AeroWing fans, with serrated wing tips for less turbulence, metal blades for fewer vibrations etc. So the new chips, with their improved fans? Thermals should not be a problem in the slightest.