Ampere’s belief is that “if you use something every day, you better love it”. They are out to bring “fun, one one-of-a-kind, highly functional gadgets that you will love using” on a daily basis. At CES 2021 they announced their Shower Power and Cell gadgets.

The Shower Power is a hydropower shower speaker which can be installed onto any existing showered and receives it power from the water flow in your shower so it always stays charged and never needs to be removed. The devices renewable energy source is just one of its eco credentials alongside being made with 100% recycled ocean plastic so the impact to the planet is minimal.

The battery of the Shower Power is charged up by an internal impeller that is connected to a mini generator to power up the unit. It automatically turns on when your shower is turned on with the ability to keep going even after the water is turned off for up to 20 hours of music playback via a Bluetooth connection. 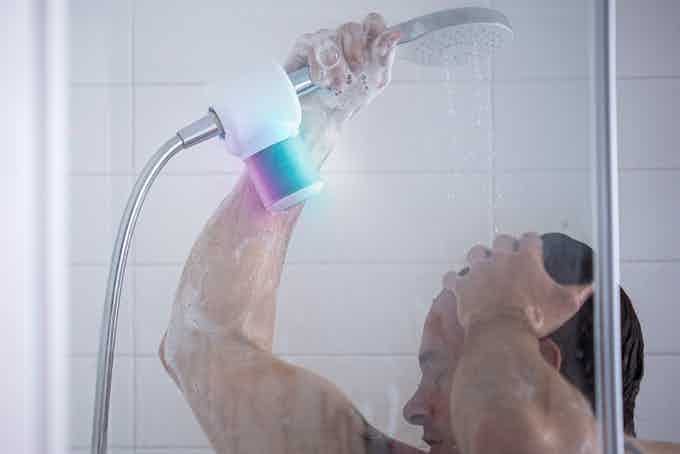 The cylindrical design found on the Shower Power offers a proprietary Sound Wave amplifier that radiates the audio evenly in all directions to delivery immersive stereophonic audio. The device also features play, pause and skip buttons so you can control your music from within your shower. But if your shower is a little out of reach then you also get a waterproof remote control which allows you to control the speaker easily.

Cell by Ampere is the first UV sanitiser and wireless charger that features that an antimicrobial shell.

Cell is able to kill germs found on your smartphone in just one minute via its interior UV lights and natural silver which features antimicrobial properties is infused on the exterior of the shell. The device has 2 x 15W wireless coils which allows you to charge your device in both vertical and horizontal orientations.

The enclosure whilst designed around smartphones, allows you to sanitise anything that will fit inside its 1L expandable capacity. The four powerful 250-280nm UV lights remove the majority of germs at DNA level which is super helpful in the current climate.

All of Cell’s accessories including an 18W PD Mini adapter, USB C to C cable and MFI USB C to Lightning cable all feature antimicrobial properties too to ensure clean devices all round.

You are able to use the USB C PD output port to charge a device using a physical cable if your device doesn’t support wireless charging or if you choose to charge two devices at once.

Ampere offers a range of other gadgets including wireless chargers, bags, power banks and self-sanitising water bottles and these are all also available through their own site.

Would you like us to test out any of Amperes products? Let us know with a comment below alongside any thoughts you have on the 2 CES 2021 launches.