So if you’re anything like me than you probably spend most of you time commuting by yourself on a motorcycle. Okay, you might not be anything like me, but there’s a reason I mentioned that. I could go into why I do own a motorcycle and why I personally think it’s better to commute on a motorcycle, but we would be here for some time. Instead, I’ll brush past all of that and get to the one thing that unites those who frequent two wheels. It’s all about entertainment.

In a car you get your lovely FM radio with Bluetooth, DAB, Aux, USB and the good quality speakers. Not mentioning the fact that you have hands free as well. For the longest time I used to run an earphone up the inside of my jacket and up into my helmet with my phone in my inside pocket. Whilst this works it did mean that everytime I pulled up somewhere I had to take my gloves off, unzip my jacket and pull my phone out. A bit of a pain.

Then Lenuo sent me their Bluetooth audio transmitter/receiver and I plugged my earphones into that. This meant I could put my phone in my front pocket and get to it easily and there was no longer anything tethered to my phone directly. There was stilll no ability to take a phone call though.

Having tried cheaper alternatives,  I liked having everything in the helmet, although I didn’t like the speaker pods used. I found it didn’t quite get loud enough and I ended up blowing the speakers by turning them up constantly. I much prefer to use an earphone. The problem is that the higher end options are quite pricey, anywhere from £150 and upwards which is well out of my budget.

After trawling through YouTube and Amazon I came across the Solo Qz. Back on 1st December 2017 I paid £82.49 from Amazon and at the time of the review that is the same price. So after using the device for over a month, let’s see how it stand up to use.

When it comes to mounting the Scala Rider QZ it is pretty simple. For me I chose to use the clip mount rather than the adhesive mount. Take out the mount and loosen the screws, pull back the helmet liner, slide the clip over the helmet shell and tighten the screws up. There isn’t any need to tighten them up ridiculously tight just enough that the unit doesn’t move. Then it’s just a case of running the boom mic. Depending on your helmet there are many different ways of doing this. For my Caburg Duke 2 I tucked the boom in behind the cheek pad and have it poking out the front.

Now you have the choice of using the included speakers or using your own. For me I had already decided that I was going to be using an earphone. All I did here was cut off the right earbud since I would be using the left earbud only. plug the 3.5mm jack into the back of the audio unit and then I tucked the excess wire from between the liner with 30cm hanging out so that I could put the earphone in before putting my helmet with ease.

Then you can slide the Solo Qz onto the audio clip. Turn it on, pair your device and then use it like a Bluetooth headset. It is really that simple.

When you’re ready to go out and hit the road just switch it on and it’ll connect straight away and you’re ready to go. If you want to listen to a podcast then just fire up your preferred app, hit play, set the volume and then off you go. Personally, for me, I have the volume set to max on the unit itself and a task within Trigger that sets the media volume for me when the unit connects to my phone.

When setting the volume there isn’t a need to set it to high level like you do with the Chinese units because of the Automatic Gain Control (AGC). Straight from Scala’s website:

AGC allows your unit to adjust the audio volume according to the level of ambient noise and riding speed, so that the volume will automatically increase in louder environments, allowing you to continue your conversation without the need for adjusting the volume.

By default this is set to medium and that is what I have been using it on. This has been more than fine for the past 3 months. At first I did find it noticeable when it changing volume, but afte.about a month I personally stopped noticing. It certainly works as advertised. For example, you can be going 30mph through the town and then come to a national speed limit road, and the volume sounds like it’s staying the same volume which is great. It works the same way when you go down in speed.

When it comes to receiving a call not only does your phone ring but so does the headset. You can answer it by tapping the multifunction button or by using your voice. I prefer to use my voice since every time someone phones me I’m usually coming up to a roundabout or just coming up to a corner. Then to end it you can just tap the button or simply wait for the other person to hang up. If you had anything playing before the call, then it will automatically resume after the call ends.

Whilst on the subject of calls, every time someone spoke to me they couldn’t tell I was riding, even with my visor up, meaning that the microphone quality is up to par.

As for the media controls, this is where it gets a little confusing. After each press there is a tone;

You can see that the 1 press has multiple functions. I found if you have the music paused, press it for 2 seconds, wait for the beep and then press the button once more, it will resume. If you just press it once it will skip the song.

I would have preferred the more common method of:

Hey it works and it just needs some getting used to. They are a few other functions that I haven’t mentioned since I don’t care for them but if you head over to Scala’s website you can check out the manuals. 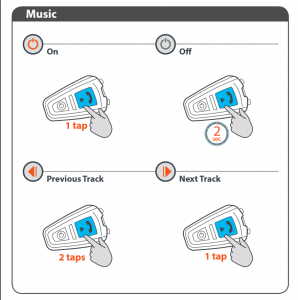 So to round it all off, sould you buy the Scala Rider Qz? Yes, but only if you want something just to pair your phone with and one other Bluetooth device. If you want to have multiple units then you’ll need to use something else with the Q line.

After using this I would never go back to the Chinese units, nor would I say they should be purchased simply to try them out. In my opinion, the Qz should be the entry product on the market. This isn’t because it is bad because it absolutely isn’t. All the functions are there apart from connecting multiple units together. It simply should be the experience everyone looking for this sort of solution should expect.

The 3.5mm headphone jack is by far my favourite feature and it gives you multiple options, again making the point that the Qz should be the entry product in the market.

If you have a Scala Rider Qz then let me know how you are getting on with it. As usual, if you have any questions then ask them below and I’ll answer them to the best of my ability. 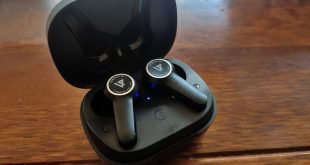