If you’ve purchased a Surface Pro 4 or a Surface Book then you’re probably on the go most of the time. The 12.3 and 13.5 inch screens are great for mobile use, especially when you don’t know what size tables that you’ll get access to in coffee shops. But when you have a desk in an office or at home, and you’re using that same small screen, it becomes less fun, which is where docks come into play, allowing you to utilise your office setup, with your mobile computing device. Let’s take a look at the ICZI Surface Dock.

I would like to thank the chaps over at ICZI for sending me over the Surface dock out for review.

Microsoft have made their own solution to the issue I outlined in the introduction,but at a rather steep (bloody vertical!) £130. Those of you who can write this off against your company or against expenses won’t be too worried by this, but if it’s your own cash, you’ll probably think twice. If you want something a little cheaper than there are many many options. Which to choose? The ICZI Surface Dock retails at £89.99 and delivers audio, DisplayPort, HDMI, USB and Gigabit Ethernet connectivity.

Pretty simple affair here. Sliding the sleeve off of the box and opening it reveals the dock. Removing the dock and tray reveals the power supply and the usual spill of paperwork. Nothing fancy.

Again just as simple as the unboxing; pretty simple. Coming off the unit you find the mini DisplayPort and the the USB 3.0 which are spaced out perfectly out. On the back of of the device you’ll find the DisplayPort, HDMI port, Ethernet port and 2 USB 3.0 ports. Then around the front you’ll find the power input, 3.5mm combo jack and a USB 2.0 port.

The one thing I find bizarre is that the power plug is situated at the front of the device instead of the the back. This contravenes one of the reasons for using a dock; to cut down on the mess of cables spilling out of your laptop or mobile device. It doesn’t detract from the usability of the product, but it makes your cable management look awful.

You can only use one of the display output ports at once. That leaves you with a choice of DisplayPort or HDMI, and only one external display. Whilst they do make this clear on the Amazon page, and I’ve also tried it myself, it’s a little disappointing.

I have plugged the dock into a 21.5inch 1080p monitor (set to extended with Windows), Ethernet, mouse, as well as connected two USB 3.0 hard drives and copied 80GB of content from one to the other. Along with this testing, I used the 3.5mm combo jack to watch a YouTube video and completed some college work at the same time. No issues whatsoever. Transfer speeds were steady and the YouTube was played back at 1080p with no stutters. I wouldn’t expect any as it’s simply augmenting the performance of my Surface Pro 4, but this was still a valid test and I was glad to see performance was not hindered by this device. This is as much as I think the average user would be pushing the dock. So as far as performance goes it gets a tick there. The cable from the dock to the surface is also long enough to have it under a monitor and still use the Surface screen and keyboard.

One thing I did notice is that every now and then there can be a lot of noise coming through the headphone jack. This can be sidestepped by using a USB audio device. There might be slightly poor components used for the audio causing excessive coil whine, or it might just be my unit. Either way it didn’t bother me too much. The Ethernet port is also just a tad slower than my 5GHz WiFi but it is by no way noticable.

All round the product works well, despite the odd placement of the power port. If you want to use it with a monitor, with an external mouse and keyboard then this is the a great solution. Though you will still need to use your surface charger to keep your unit topped up whilst docked, you could always look to buy another charger to keep at your desk. However your mobile/desk setup becomes slightly more expensive, as to get one from the Microsoft website costs £70.

The official Microsoft dock is £130 and for that you get an extra USB port as well as charging the surface at the same.  There is less display output options however with the MS unit sporting only 2 mini display ports meaning that you would need to buy an adapter if your monitor doesn’t have mini display port.

It all comes down to how much want to spend and what ports you want. Personally I have found this configuration more than acceptable for my use. I just wish the power port was around the back to be more aesthetically pleasing. They could have even removed either the displayport and replaced it with an extra USB port or even just move the power plug to the back and add a USB on the front. Despite the weird layout of the power port, I would certainly recommend this unit. If you have brought one of these or one similar then do let us know how you’ve gotten on with it. 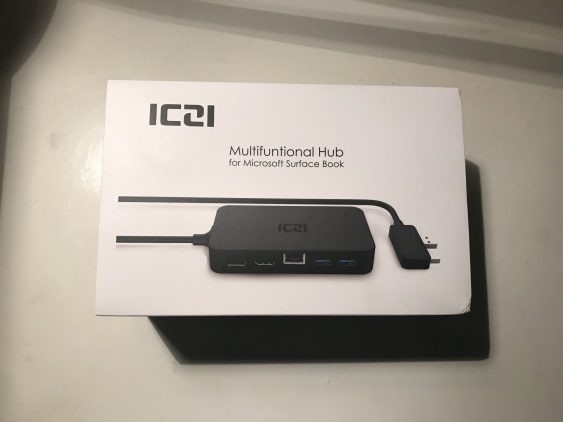