We have lots of little things that can go missing in our lives now don’t we? Wallets, keys, paperwork, even phones. Unless you’re hyper-organised, the chances are that you semi-regularly misplace something, and I’m going to go out on a limb here and suggest a wallet, keycard or keys are the main culprits. For example, during my review period with these little Mynt Trackers I lost my keys and my access control card for my job! Point made. However the Mynt Tracker like other Bluetooth trackers, looks to solve this problem with a 21st century solution. 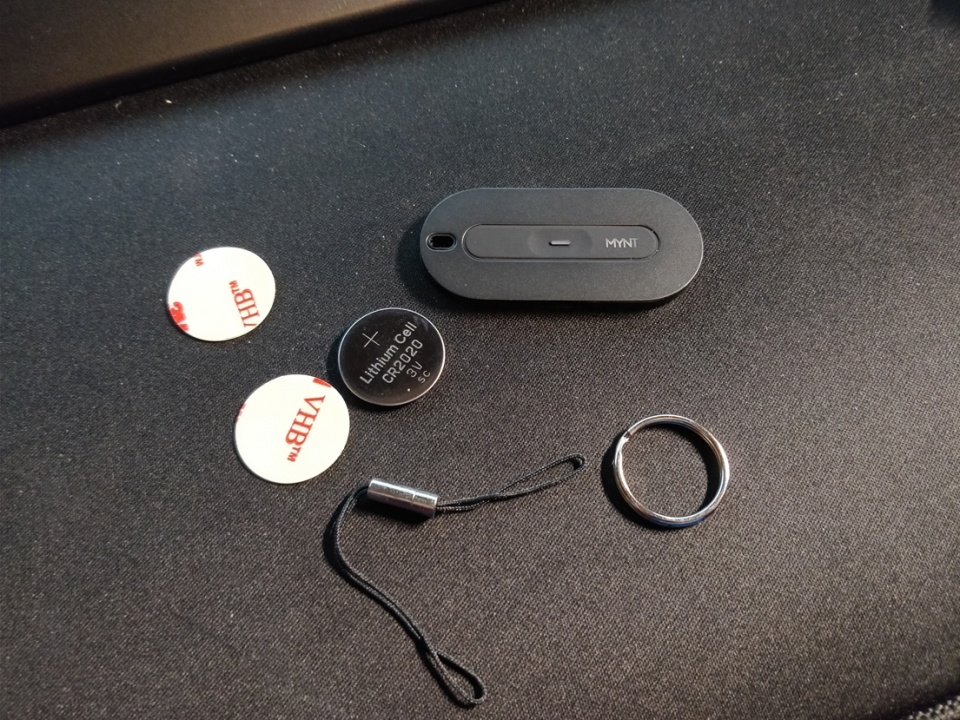 Let’s first take a look at the packaging and the design of the Mynt Tracker by Slightech. They very kindly sent me two units to test out, and I’ve had one on my keyring (which helped!) and one in my overnight luggage which I use quite a bit.

Each package comes with the small Mynt Tracker which is just 2.2″ long, and only 3.5mm thin. There’s a couple of 3M double-sided tape patches to use if you want to stick the Mynt Tracker to something, along with a spare CR2020 battery (one is in the unit already) and a lanyard and keyring. That’s more than I expected. The packaging is also not much bigger than the Mynt Tracker itself with a small footprint which I also appreciate. I’d prefer less use of plastic here but it’s a small amount considering. 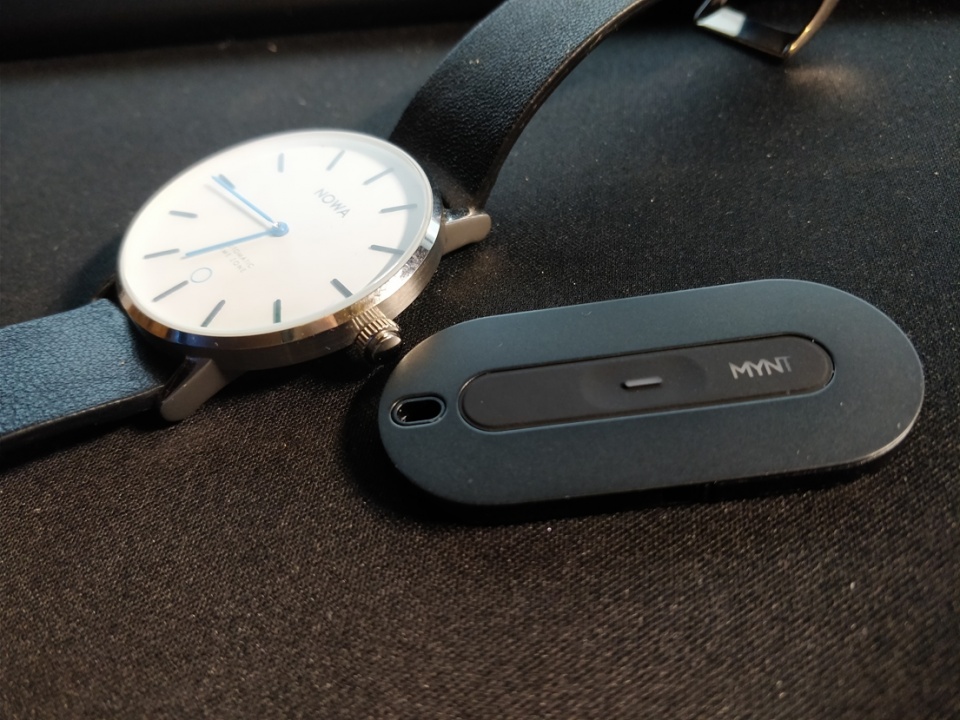 The design here is sleek and minimal. A number of colour options are available, however I opted for the Grey and Black versions and they look super fresh. At one extreme there’s a lanyard loop which I’ve opted to use in a keyring configuration instead due to the way my keys hang. Towards the middle of the unit is the multi-function button which is used to trigger a number of activities as well as two-way communication with your smart device. Then there’s a little branding at the other extreme and that’s it.

On the tiny edge of the device is a port to pull open to replace the CR2020 battery, and I’ll mention again that the Mynt Tracker comes with a spare battery as well which is really nice to see.

There’s not much room for much else on the unit to be fair, such is the footprint of the Mynt Tracker.

So what can you do with this device?

First things first – you have to pair this device with a smart device. This is beyond simple as most pairing processes are now (and should be). Download the Mynt app and follow the on-screen instructions to pair a device. Once that’s completed you’ve got a few choices. Firs up, name your Mynt Tracker. There’s a few built-in purposes such as luggage, keys, wallet, etc so that you can accurately assign multiple Mynt Trackers to their own distinct use.

Mynt has a number of functions which will help you in that time of need, or can just be generally helpful in day-to-day activities – let’s have a look.

The “out of range” function which usually bugs me on other trackers is actually helpful here. This detects when your Mynt Tracker is no longer connected via Bluetooth to your smartphone and rings an alert on your phone. You can then move back within range (i.e. go and get your tracked item) or if its actually been lost/stolen, you can use the built-in GPS on your smartphone to find where it was last seen. The good news here is that when you ‘report’ on your Mynt app that your tracked device is missing, Mynt utilises it’s user base around the world to help you find it. Others can detect your Mynt when close to it under these circumstances which means they can find your tracked device – whether they return it or keep it for themselves is down to the nature of the individual’s soul. Not fool-proof but a nice to have.

Let’s say you know you haven’t lost your keys but they might be within a sofa corner or somewhere, you can use the Mynt app to “ring” the relevant Mynt Tracker to find it. It will chirp until you have told the app you’ve found it. In my testing, whilst this works really well, the ringer could be louder which is no doubt a result of the size of the device.

There’s more however with the multi-function button allowing additional functionality. The Remote Control as Mynt calls it allows command assignments to single button pushes, double, triple, hold and tap and hold actions. These can be assigned by ‘Work Mode’ also so depending on what the device is doing at the time the Mynt Tracker can work differently. Very neat. My setup currently revolves around Music, but there is a custom Work Mode which allows you to customise the actions incorporating multiple work modes.

With all that utility, there’s next to no impact on battery life thanks to Bluetooth 4.0 LE and unlike similar trackers I’ve used, all of these functions work straight out of the box with no specific issues or repairing required. That’s really something for a unit this small at this price point.

As these units are likely to be in pockets, or bags mostly, they need to stand up to some battering also. IP43 rating for splash proofing is handy, but you wouldn’t see me holding this under water and expecting it to work. Again, due to the price here I wouldn’t expect anything more than this, but it would be handy to have other options for those that might want to have trackers in more harsh environments. 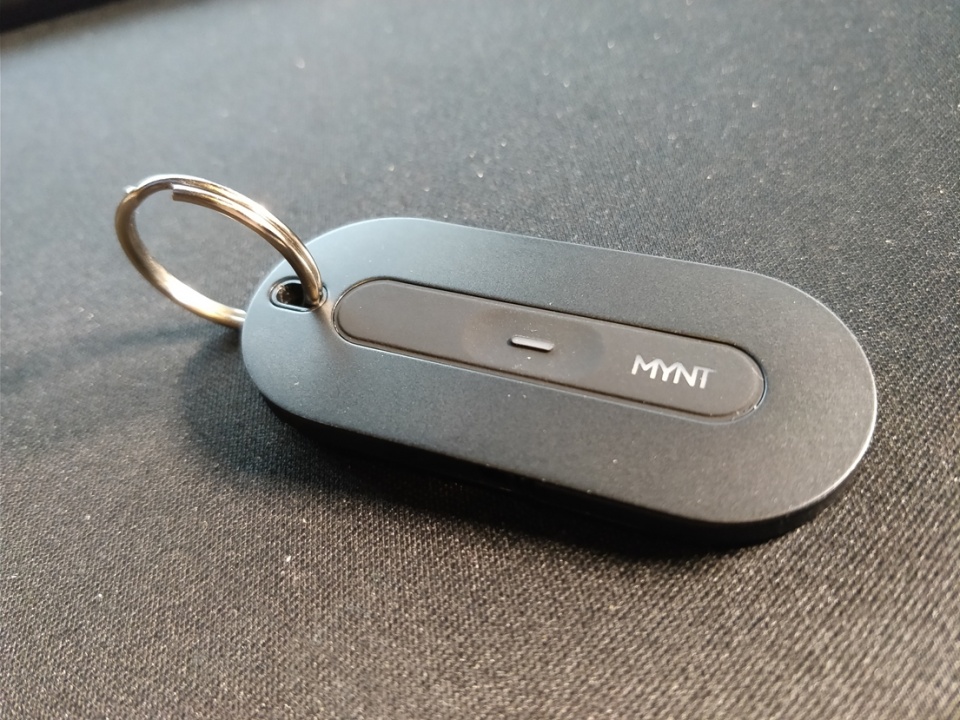 I really can’t fault the Mynt Tracker for much. As I mentioned in the body of the review, I’d like to see a bigger/louder tweeter in the Mynt just for those occasions you need to find your keys under a bunch of clothes. I’d perhaps like to see some other designs too, but in all honesty, at £18.99 for a single unit with the option of cheaper per unit bundles, I have to say I’ve found my tracker of choice. It hasn’t failed me, and unlike others I’ve tried, I’m actually continuing to use this.

The combination of 21st century technology with watch batteries from last century is something I’m starting to enjoy in other devices (like the hybrid Nowa watch I’ve reviewed) and it’s the perfect marriage here to sustain that battery life along with Bluetooth 4.0 LE.

If you need to track something semi-important, then seriously consider the Mynt Tracker as a viable option. 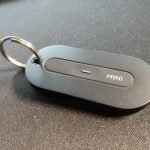