Continuing our journey into Gamdias and their gaming peripherals, today I’m looking at the Hermes M1 7 Color (I know, there’s a ‘u’ in Colour, but that’s their branding). The Hermes is just one of the gaming keyboards Gamdias offer with the Hermes P1 RGB (a 10-keyless option) and the Hermes RGB (a premium gamer version) completing the line up.
Let’s take a look and see if I’m as impressed with their keyboard offerings as I was with their Hebe M1 RGB headset. Let’s start by saying that a gaming keyboard is not just a keyboard you’ll use exclusively for gaming whilst it might sound like a logical thing to say, the keyboard needs to be at least acceptable in all other use cases unless you are a pro gamer who has a keyboard specifically for certain games, etc.

Let’s start with the design of the keyboard. Well, it looks like a gaming keyboard. It has a brushed metallic look on the plastic back plate sitting underneath the keys, which stretch to the very edge of the board itself. It’s a nice clean look and a little different to the matt black boards we see from other companies. A nearly 2 metre long braided cable is on offer here terminating with a gold plated USB connector (if you’re in to that sort of thing). Some companies follow the colour coding on their boards for the braiding but Gamdias leave it nice and subtle. The keys themselves are largely uneventful. They are slightly concave with a top centred print and the font is a bit Marmite; you’ll either love the futuristic/gamer font or you’ll dislike it. The white plastic of the keys, which is the painted black, allows a nice flow of light through them when the various lighting modes are introduced.

The included wrist rest is a nice touch but I would like to see it connect a little bit more snugly than utilising gravity to stay put. There is no click or satisfying connection here, simply lay the wrist rest atop the front keyboard rest and ensure the grooves are filled. It hasn’t affected typing, but on one or two occasions with a bit of force it has wiggled loose. Nothing to worry about too much perhaps though. Gamdias have opted for branded Kailh switches sitting beneath their caps here and this particular board comes complete with “Brown” switches. Cherry MX brown switches are sometimes favoured by gamers for their less clicky noise, but their stellar tactility. The keys being used here are very similar to Cherry MX brown keys and whilst some might prefer blues or reds, those wanting brown switches won’t be disappointed with the Gamdias variants. In order to get to remove the key caps and replace them you need only pull, or flip the keyboard over and use the included key cap remover. Another nice touch.

The keys are clearly labelled where dual functionality is available with dedicated media functionality called out beneath some of the Function keys, and macro hot keys equally obvious. That label won’t stay crisp and clean for too long however as with just a few minutes of typing (regardless of how careful you are) the oil from your fingers will tarnish the black finish and give a horrible unclean look to your keyboard. A quick wipe down with a cloth and you’re good to go, but we’re just seeing here the keyboard equivalent to “fingerprint magnet” on smartphones we think. It’s very easy for a gaming peripheral to be overtaken with “l33t gamer” design to the detriment of the overall functionality and layout of the keyboard. Thankfully, there aren’t too many things going on that I dislike on this board, but there are a few. Firstly I’m not a huge fan of the font, but that’s purely objective. What is less objective is the lack of any left hand Windows key by default. In its stead sits the FN key to alternate the dual functions of some keys. I’d like to see this alongside the Windows key on a keyboard. Moving to my next little gripe, some of the keys are just misplaced. The hash key is now above the return button, which decreases the size of the return button considerably from standard keyboards. For somebody who touch types this is a big deal and is one of the areas that took the most getting used to during the testing period, especially with the proliferation of hashtags in 2017!

That’s pretty much it to be fair. The finish is a grease magnet, which I’ve already stated, but in terms of the design of the board, I can’t pick too much more fault with it. One minor personal note here – I have a bit of an issue with the WASD call outs being shown on the arrow keys. I have no idea why, but I wanted to share that titbit with you!

In terms of general typing, the Gamdias Hermes M! performs quite well, once you get used to the switches (that is if you’re not used to them already on your current keyboard). I managed to deliver around 74 words per minute with a 90%+ accuracy rating after just 30 minutes with the keyboard. I’m happy with that ans shows that this keyboard can be utilised for more than just racking up frags and owning newbs.

The media keys work well, and the Hera software can be used to customise keys as well as record macros to be assigned to shortcuts etc. The usual sort of functionality you’d expect to get from a gaming keyboard at this price point. The lighting effects are also quite subtle. With a breathing mode, various brightness levels, and a responsive fade mode, which flashes the colour the instant you hit a key, and then slowly fades to off again, it’s not as extensive as some models of gaming keyboard out there but it’ll probably deliver the required level of “RGBness” for whomever purchases one. To demo the lighting modes, head on over to the Gamdias website and check out the different functions yourself.

The Hera software is the same software used for all Gamdias products, and it delivers almost the same functionality across the peripherals it supports. Macro recording, LED control, button mapping, etc. All standard fair, but there are just a few quirks of the design. The software seems to bleed into the underlying windows/desktop at the extremities of the software box, which can be annoying. Likewise there isn’t an easy “Hera settings” button, instead look for the settings cog. Whilst I, and many others will be familiar with that particular icon, I think a simple call out would benefit the majority. The Gamdias Hermes M1 isn’t a keyboard for the hardcore gamer. It doesn’t have full RGB, instead offering just 7 colours (although I count 6, unless ‘off’ is one!), it doesn’t have a USB pass through on the board, something many gamers now come to seek, and it doesn’t have too much flexibility in terms of height or wrist rest positioning. What it does have however is a tactile set of switches with the respected Kailh switches on board, a sleek and stylish design, and a price point that is sub £100, which for a gaming keyboard in 2017 is becoming something of a rarity unfortunately.

Sure the keys feel a little bit bigger due to the slightly sharp nature of the concave curve, and yes, they do wobble a little, but this isn’t an elite eSports device. Gamdias have the RGB version for that. This is a more consumer grade gaming peripheral.

I personally prefer keys with a slightly more clicky feel to them, and a lower actuation point, but the Gamdias Hermes M! actually had me hooked through a gaming session on Playerunknown’s Battlegrounds recently and I could see myself using it over other keyboards at my disposal simply due to the gaming feel in a short period of time as well as the aesthetics. I’d recommend this board to anybody looking to spruce up their gaming setup, as long as gaming wasn’t their only reason for using it. 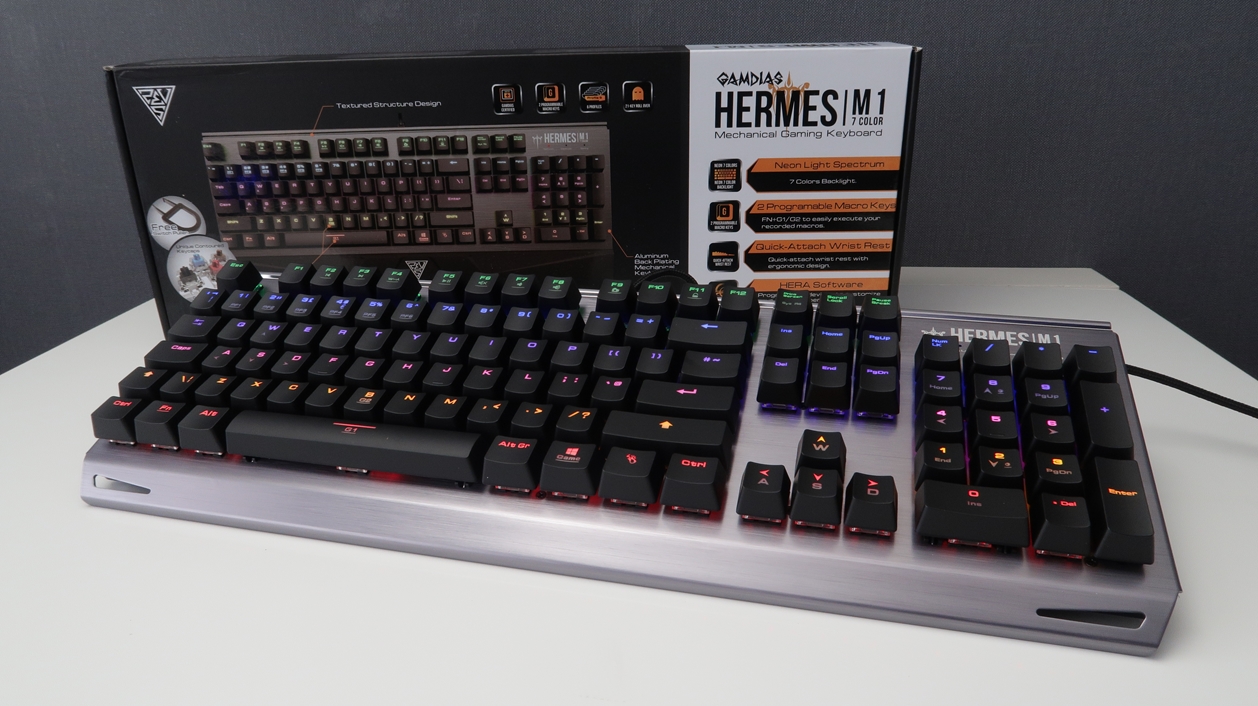