Gamdias are a new name to the site, but not to gaming, or indeed myself. I’ve gamed, on and off, since ’96/’97 online, and I’ve always loved my gaming peripherals. Usually leaning towards Logitech due to their prolific use of Cherry MX key switches on their keyboards, and the likes of Steel Series for headphones. However Gamdias are a familiar name to me so its great to finally be checking out some of their RGB products. The Hebe M1 RGB are USB headphones that pack a punch. Let’s take a closer look. I wouldn’t normally add this in an overview section like this but I just loved the story behind the name. Gamdias, sounds strange doesn’t it? Well it’s easily explained according to the eSports orientated peripheral manufacturer. The first three letters are an abbreviation for “Gaming arts in motion”, and “Dias” is a Latin word for “God”, and as such Gamdias literally means Gods of Gaming. Cool eh? It’s a very lofty ambition and quite a grandiose claim, so we put their Hebe M1 RGB to the test.

The package is very simplistic with just the headphones themselves, and not a lot else other than some cardboard. This isn’t completely unwarranted as the Gamdias Hebe M1 RGB headset is practically what us old schoolers would call “plug and play”. Simply plug-in the USB connector, stick them on your head and away you go. Pro tip; turn down the audio before you put them on after connecting them up, because damn, it’s loud! That’s the first thing I noticed. The volume ramped up to 11 immediately and thankfully my keyboard has a manual volume control so I could immediately mute, and then alter accordingly. Just be aware of that.

Immediately my ears were comforted by the almost 1 inch thick padding covering the 50mm drivers. They sit fully over the ears, regardless of how big your ears are, and the head band is sturdy enough to hold them in position throughout long gaming sessions. The cable is plenty long enough running around 2 metres in total, with a control pod, in line, at around the 50cm mark. Let’s stop there for a second. The control pod is bulky, cheap feeling and whilst housing some ideal buttons (mute toggle for one) really detracts from the aesthetic qualities of this product overall. That’s just a personal opinion, but it would have been improved in terms of size also. The other buttons on the unit control the lighting effects on the ear cups (on or off) as well as the rather odd “feel the noise” feature, which rumbles the ear cups in certain circumstances. This is fun for the first 30 seconds, but after that I’d bet good money most will follow my actions and turn this off each time I connect up to game.

The headband doesn’t have an awful lot of padding on its spring loaded design, but it seems more than adequate for comfort. In fact, I’ve used Steel Series, Razer and other gaming products and they all have had a thicker headband, but none feel any more comfortable than this which is testament to the design. The spring can be extended to its maximum where it meets the metallic top band which is brushed for a nicer, sleek look.

On to the ear cups and they are huge. The branding on the box suggest “oversized” and I wouldn’t disagree with them one bit. I prefer over the ear headphones to ensure I get as much immersion as possible when playing. Over the ear headphones usually provide a large element of passive ambient noise cancellation, however it’s not quite as evident on the Hebe M1 as I’d like. It’s enough however. Pulled from the left ear cup is the microphone, but it only extends out from the ear cup a small amount to around 5-6cm from the position it sits in when retracted. This isn’t quite long enough to fit in the perfect ‘edge of the mouth’ position but nobody complained during my gaming sessions and the sound from the microphone seems acceptable so I’m splitting hairs here. The ear cups have some subtle Hebe M1 branding as well as subtle gaming RGB lighting. It’s not gaming unless you have RGB right? PCMR salute! In all seriousness though, I quite like the subtlety of the RGB lighting effects on the ear cups here. Understated is the way to go in my opinion, and these sit on the right side of that fence for me.

So, how do they actually sound though? Well, pretty might fine for a gaming headset to be frank. The low-end is not as overpowering as something like a Razer Kracken, and is more balanced like the Steel Series Siberia line up, and this is something more often seen on 3.5mm offerings from gaming companies than their usually ‘balls to the walls’ USB products. Without any EQ tinkering, the soundstage is quite balanced overall with the mids flowing between the higher and lower ends relatively well in most gaming scenarios and the highs being managed crisply. It’s within the EQ that you can tweak this even further with presets for the usual musical genres, as well as an actually quite nifty “FPS” option which increases the highs to allow those foot steps to be noticed easier. I run this EQ off as I don’t find the need to tweak, but I can see why more serious gamers would use the FPS option for definite and it’s nice to have. The EQ is just one of the features within Gamdias Hera, their gaming peripherals control centre software. Other settings include changing environmental options to allow you to sound as though you’re playing DayZ in the Sydney Opera House for example. All really useful options of course(!). Again, great to play with once, but never to be touched again. The karaoke settings can be handy if you’re a streamer with changes in your voice being easily accessible. The one strange area is the Main Settings screen that shows a 7.1 Virtual Speaker Shifter setting which can be toggled but there is no discernible difference when changing the location of some of the other channels, such as Left Rear. This is further evidenced by the fact there is no “test” you can run on each channel, within the settings itself. Load up a song of YouTube and test it that way to see if your mileage varies.

We haven’t even mentioned the price yet. These aren’t cheap headphones, but they are a cheap gaming headset when weighted against the other competitors on the market. The audio is more than good enough for casual gamers, although those requiring a little more for their money might have issues with the pseudo 7.1 setup. Gamdias could deliver more features as well as a more aesthetically pleasing control pod too.

They won’t be disappointed with the comfy padding and sure as hell won’t have an issue with the RGB lighting effects either.

The subtle branding and RGB lighting on this device is evidence that gaming peripherals can be both understated and powerful enough for gamers to weild. As a package the Gamdias Hebe M1 RGB headset is a steal at £65 here in the UK and I can’t really level too many criticisms towards it given that price tag. I’m now more keen than ever to cheak out the Gamdias Zeus P1 and the Hermes M1 to complete the setup and I can quite easily see me looking to Gamdias for future peripherals also. 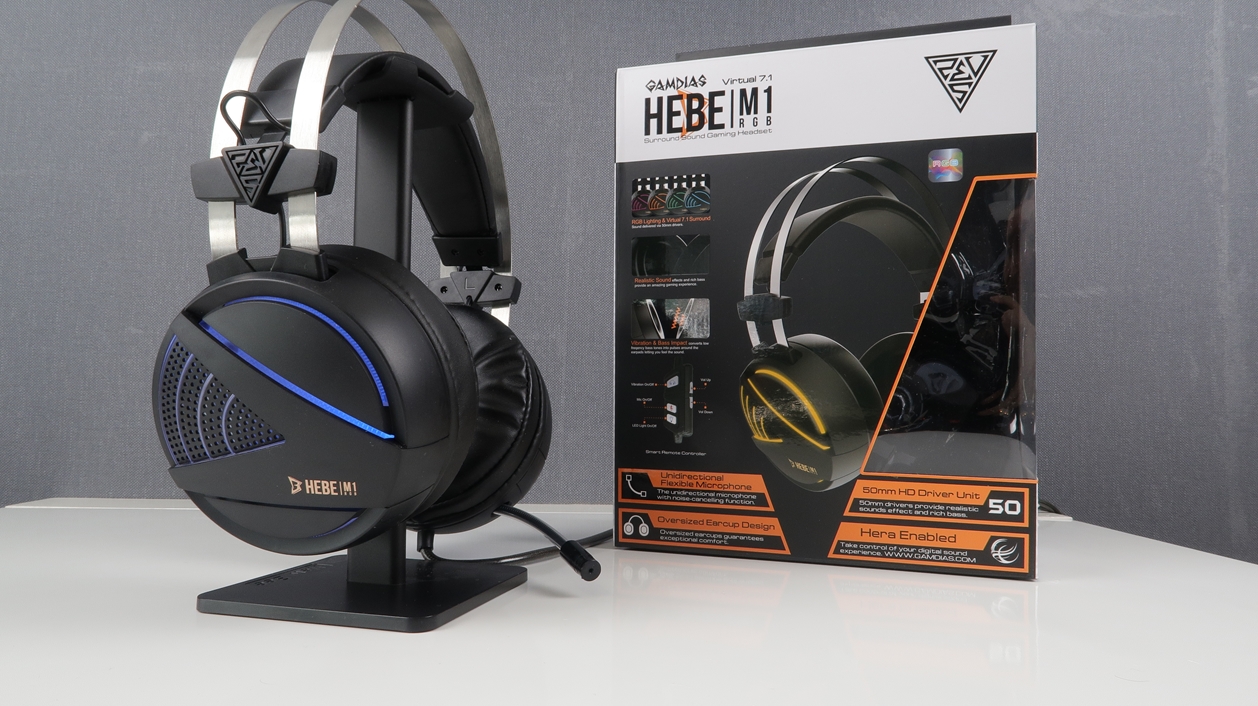