Back at IFA 2017, DxO introduced us to the DxO One, a camera attachment for iOS devices (Android to follow) that harnesses the full knowledge and expertise within the DxO family and encases it into a small form factor optical device for those who really care about their photography but don’t want to move into the professional market. You might well know them more for their grading scheme for mobile device and camera lenses. Today they are finally unveiling their new plans to launch a new DxOMark Mobile rating system which will taken into account new technologies such as bokeh, dual cameras and low light performance.

If It’s Not Broken…

Let’s start with why they are looking to replace what many might presume is not particularly broken currently. Smartphones and technology in general is always changing and as such what we used to look for in mobile photography is no longer a relatively static dimension. With the latest few generations of devices, megapixel chasing has succumbed to larger pixels, whilst single cameras have given way to a ubiquitous deployment of dual camera optical packages. DxOMark are aware of these changes and feel they need to alter their testing mechanism to take these new technologies into account in order to guide their audience in what is, after all, a site that attempts to inform consumers.

In a study carried out across France, Germany and the US of 1085 individuals, Ipsos backed up the change in the use of mobile photography, and lends more weight to DxOMark Mobile’s change. For example, 60% of users surveyed fell into a “dual user” category that suggested they utilise both smartphone and conventional camera equipment to take pictures, but that 84% of those users still like to share their daily life in pictures on social media. This points to more and more mobile camera users, or “smartphonographers” looking to utilise their smartphone as the primary daily camera and they’re sure this will only increase as technology becomes the driver for use rather than users. 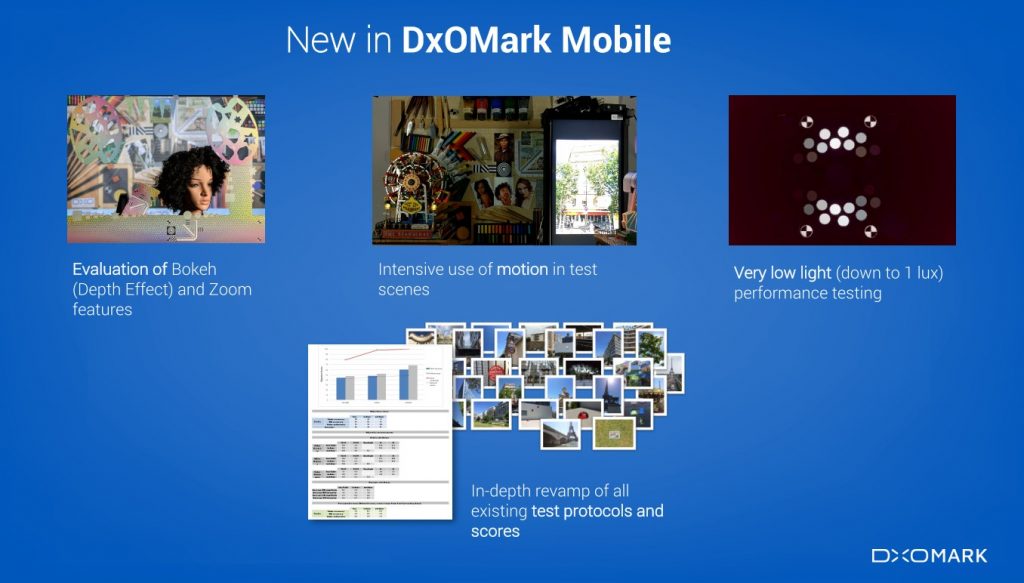 In the new DxOMark Mobile, which will slowly review older devices to ensure that comparisons stay relevant (but don’t expect your iPhone 5C to get re-reviewed – only the most recent generations are likely to get the re-review treatment), will focus on those new technologies such as low light ability, tracking of moving subjects, bokeh effects, zoom ability and more as manufacturers innovate.

You can also expect a new review infographic that will more visibly show consumers where a smartphone’s photo prowess sits against its peers, or how grain in a video compares to the market leaders. Think top trumps, but for smartphones!

We’re looking forward to seeing this evolve, but we’re left wondering how the industry will view this change. Whilst there is no licensing deal between those manufacturers wishing to announce they have “the top rated DxOMark camera in a smartphone”, it’s surely going to leave some (read: HTC U11) wondering whether to place much stock in such metrics moving forward? That will of course be determined solely on how DxOMark’s current audience takes to the news.