Everybody knows that the wacky ideas and those who wish to do something a little different without having to jump through the red tape of VC investment and Silicon Valley, go to crowd funding as a source of backing for their ideas. Dubleup, the brainchild of Madeleine Saric, has taken this route to bring her Dubleup Credit Card Sized Power Bank to the market. Let’s take a closer look at the product you’d be backing! The Dubleup Credit Card Battery isn’t a new concept. Companies have been attempting to minimise battery packs for a number of years, ever since smartphones became ubiquitous in reality. The Dubleup is perhaps the lightest I’ve ever handled in real life however.

The Dubleup unit is tiny as well with dimensions of just 86 x 54 x 5.5mm, weighing just 40 grams, and the aluminium (we think it is!) top shell is textured to the touch with a softer material on the bottom, and it gives a lovely finish. There is limited branding on the unit which is nice to see, save a little “DP” logo on the pull-out USB connector

Coming with both microUSB and Apple certified Lightning connectors, there is one thing missing in 2017, and that’s a Type-C version, but Dubleup have already stated that they are working on a Type-C version which will most likely come in the form of a 2.0 design.

Moving around the device there isn’t much to see. On the right side of the device is the microUSB input to recharge the included 1280mAh battery, with a status button controlling the LED status lights (three of them) on the rear with the small pop out microUSB cable also housed there. That microUSB cable can deliver a 1A charge which isn’t particularly fast but will trickle feed any device enough to give a boost in an emergency.

That’s about the size of what this device can offer. It’s best feature is the stylish nature of the unit, and it’s portability, however that is offset a little by an under-cooked battery capacity. We’d have liked to see something a little larger in the battery department however when you’re going for a credit card sized device there is a limit to the size of Lithium battery you can use.

@_dubleup launched their #kickstarter a short time ago..Check out our site soon for the review of what you're backing! More info at https://goo.gl/6wgZya #mtt

I want to correct my “awesome bit of tech” statement in the Instagram vid above – that was before I saw the price!

In my testing I had no issues charging my microUSB devices (and even my Type-C devices with an adapter although that’s something else to carry), and we managed around 87% efficiency with my OnePlus 3 rising from 50% charge to around the 85%-86% mark. A decent emergency boost. Once emptied the Dubleup takes a couple of hours to charge up itself.

The Dubleup Credit Card Sized Battery is currently looking for backers on Kickstarter with 28 days to go at time of writing. If backed, they are looking to ship units to their backers in June 2017, and the cheapest pledge that gets you one of these units as an ‘Early Bird’ is AUS $70 (£43). That’s steep for a 1280mAh charger, but you’re paying for 70% style here, not necessarily the substance as well as the portability aspect. A quick Google will find you a credit card sized battery that;

On that basis it’s difficult to recommend backing this. Is this another Kickstarter fail? I don’t think we can say fail, but it’s certainly over priced for what it is. Make it £10 and I’m saying it’s a great option for an everyday carry, but at quadruple that, it’s just another highly priced item. 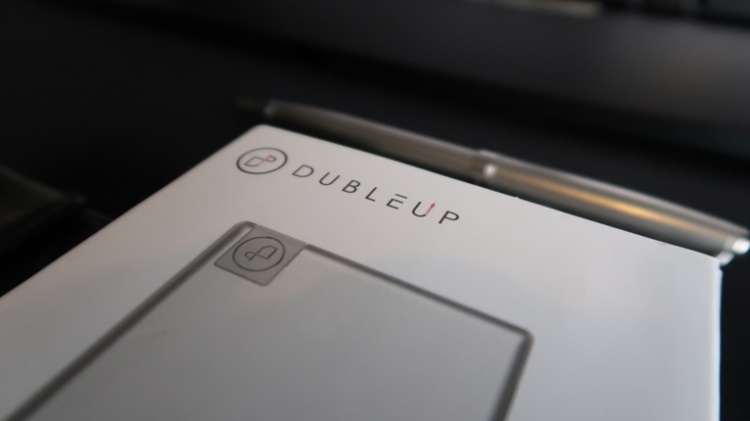