eSports has become a big thing since I first started gaming on my PC. We can perhaps thank the likes of Counter Strike and League of Legends for delivering gaming of all sorts to the mainstream audience as more than just players, but spectators. Fnatic, an eSports gaming team have, like many teams, a large amount of merchandise fans can purchase. The Clutch G1 is one such piece of merch and it’s an FPS orientated gaming mouse with RGB lighting. Let’s take a look. I’m not an avid eSports follower of any team, but I do fire up Twitch.Tv relatively frequently to catch some Counter Strike:GO being played and perhaps a few other titles. I personally use a Logitech G500 as my gaming mouse of choice and this has seen me firmly planted in mediocrity as far as CS:GO is concerned for many a year. I was happy with that. I don’t game as much as In used to, and this mouse has been a rock in my productivity use too. When I was offered the chance to test the Clutch G1 however I immediately wrote it off as a gimmick with an eSports team branding on it. “Nothing of real quality can come of this” I thought.

Well, I was wrong. Spectacularly wrong. This device is used by both Custa (Fnatic’s Overwatch team) and Dennis (Fnatic’s CS:GO team) and I can believe it.

The Clutch G1 has a lovely brushed rubberised plastic finish across the entire surface of the device with glossy black plastic buttons and a braided USB cable. The buttons do look a little cheap to be fair but they have a nice amount of travel and are easily found. The scroll wheel is rubberised also with a noticeable click-through each stage without any free-wheeling. On the bottom of the device are three relatively minor glide pads, but these do a good job when on a flat surface or a gaming mat. On the left hand of the mouse are the two thumb buttons, with the two CPI selector buttons on the top with the scroll wheel, and a bare right hand side. There are no ledges or supports for the thumb of the little finger here which makes this ideal for a clutch grip, albeit a claw or palm could equally be acceptable given the smooth unobstructed surface of the Clutch G1. I use a claw grip and this was just fine for my use. The USB cable is angled slightly upwards when it exits the Clutch G1 which helps to make sure it’s going to get nowhere near to the gaming surface. A nice touch.

There are no fancy palm LEDs, no branding emblazoned across any of the surfaces of the mouse as, frankly, you’re going to have your hand covering it! There is a small around of Fnatic branding at the front of the left and right side. That’s it.

This wouldn’t me a gaming mouse if it didn’t have something fancy about it though would it? Well, the use of classic Omron switches for the buttons isn’t a surprise. They’re almost nailed on for a quality gaming mouse. The optical sensor is also a no-brainer in these types of peripherals due to their tracking ability and high DPI. So, the fancy bit of this otherwise simple design is in the RGB LEDs in the scroll wheel and towards the backside of the mouse. Of course, it wouldn’t be a “gaming” mouse without LEDs!

The mouse is the epitome of plug and play, however the Fnatic Gear software does allow the customisation of profile, mouse button bindings, macro recording, as well as controlling the LED colour and CPI steps. The software feels light and unobtrusive and is as simple in design as the mouse it controls.

During gaming sessions, it took me a little while to get used to but I found the tracking brilliant and was soon getting used to the button configuration after being used to the G500 for so long.

It wasn’t all perfect news though. As a claw gripper, I found that the elevated arch of the mouse caused my fingers to stretch a little more than normal to actuate the left and right mouse buttons. Anybody who claw grips knows that having a switch that actuates from the back of the button as well as plumb in the middle is Utopia. Here though the depression was a little more resistant than I’m used to as my fingertips hit the back of the buttons often. It seems a little more suited to somebody with either longer fingers, or those who prefer palm grips.

Furthermore, by far the biggest flaw I found was the glossy finish on the thumb buttons. I’d definitely like a textured finish to allow some grip on them when pressing as well as being able to easily differentiate. Not a huge issue but it was noticeable and something I missed from the G500.

Additionally, and as a complete aside, it always baffles me that more claw-grip marketed mouse products don’t opt for a vertical stack of side buttons rather than horizontal. It might just be me, but I find my thumb is eminently more proficient at moving up and down than it is backwards and forwards. This could be a personal preference though.

I could certainly see the likes of olofmeisteR grabbing a clutch victory using this mouse. It’s precision is as perfectly predictable as its aesthetic. It looks like a quietly brilliant device thanks to its simplistic design and button layout, and it certainly performs as such.

It’s not without its little foibles, and for me, the side buttons was almost a deal breaker, but again, after a bit of time I started to get used to them so I’m sure I’d get over that. All mice have foibles and they are usually in the eye of the beholder.

The fact we have an eSports-team branded device that actually could sit at the top table of gaming peripherals was more than I expected going into this review, but I’ll certainly be working on relegating my old G500 and using the Clutch G1 going forward. I can sometimes kill two enemies in CS:GO now! 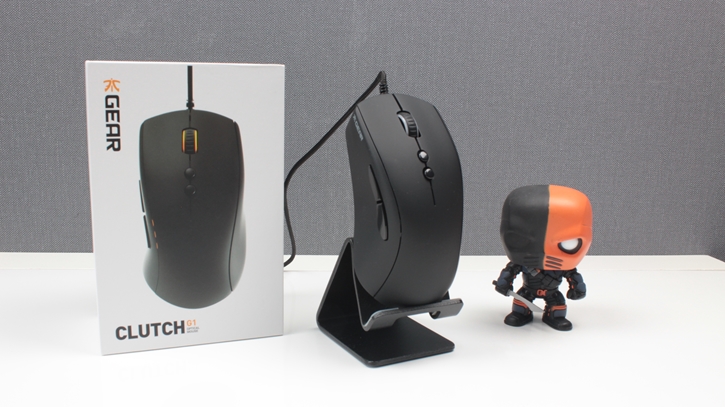