Almost everyone I see with a high-end smart device these days is carrying a power charger. Now that might be the circles I frequent of the industry I work in, but it’s true to say that if the idea of carrying portable power packs to top up your devices wasn’t on the increase anyway, the “Pokemon Go” phenomenon (short lived as it was) hastened that upwards trend. The Askborg ChargeCube has a snazzy name, price tag and footprint. Only the performance is left to be tested! If you like what you see in this review, we’ve got a special discount code. Used MOBILETT to get £3 discount on all Askborg products via Amazon UK- thanks Askborg, every little helps

Askborg are a new young mobile peripherals company having been founded in 2016 by a former Anker employee. This makes sense as the peripherals share similar design language and SKUs. The Askborg ChargeCube is their largest capacity power bank currently available with smaller, even more portable units available also as well as car chargers and cables. We’re assured there are more products to come.

In the very Anker-esque white box comes the power bank itself, a microUSB cable, warranty leaflet and quick start guide. That’s all you need really, and I’d like to see companies significantly decrease their packaging footprint and complexity. I understand the marketing machine demands certain standards, but environmental concerns trump that for me. Moving on to the Askborg ChargeCube itself, it felt ice-cold to the touch when I first removed it from the packaging. Coated in an aluminium housing, the black metallic slab utilises most of its innards for the 20800 mAh battery, with the inputs and power button on one end, and only branding and quality control stamps at the bottom of both the front and the back. At the top of the unit is a small LCD screen which shows a remaining charger percentage. The unit has two USB output ports, both capable of 2.1A, but with one of those ports being utilised for ‘Speed ID’. Essentially this port chargers the connected device at its optimum speed rather than throwing the full 2.1A at it if cannot handle it. Sandwiched by those ports if the microUSB input/charging port for the unit itself, with the power button offset to one side. Thankfully, no flashlight here. Does anybody ever use them on these units? If you do let me know in the comments if it’s regular as I just can’t understand the need.

Performance wise the Askborg ChargeCube (Star Trek name anyone?) delivers as you’d expect. In terms of its efficiency it sits proudly around the 87% mark which is acceptable. I managed to completely recharge my OnePlus 3 and Lumia 950 three times each from flat with 1% remaining on the digital display. Not too bad at all. Charging times however were a little slower than other units I’ve tested mainly because I couldn’t seem to hit the 2A output mark on any device I tried. That being said, they weren’t dog slow compared to anything other than the Dash Charger for my OnePlus 3 or a QuickCharge 3.0 for other devices.

That’s perhaps one area the Askborg ChargeCube could improve in. Update the power output, or bite the bullet and pay the license for utilising a proprietary charging technology such as Qualcomm’s Quick Charge. That would bump the price up however and at £29.99 it’s already at the top end of what I’d expect for a device of this capacity.

The inspiration for Askborg is evidently Anker, and they have a little way to go before they are fully on their level, which is to be expected for a brand new company. The build quality of the Askborg ChargeCube is by far superior to many similar devices which and whilst it adds to the bulk, it’s more resilient and still eminently pocketable. The digital display is a nice touch and is more useful than the ambiguity of LED status lights. We look forward to more products from Askborg and we’ll hopefully continue to review them as they grow and improve. A great effort for their first high-end power bank.

Keep an eye out for some Askborg products in an upcoming giveaway. 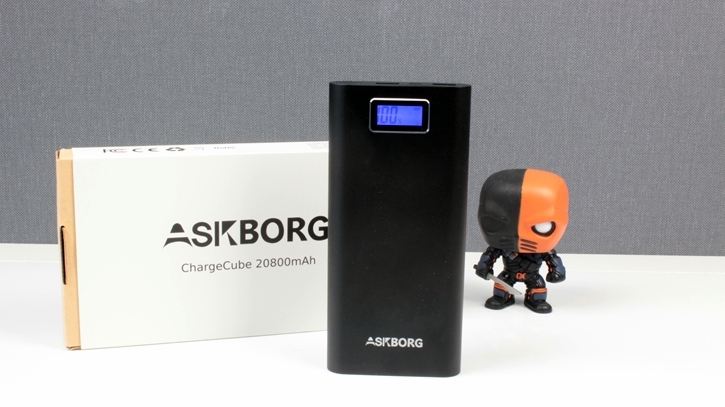 Buy from Amazon.co.uk
Buy from Askborg (for discount)