Gaming graphics and gameplay is only as good as the display you’re viewing it on. That’s why everyone is scrabbling for the highest refresh rate, lowest latency monitors for their gaming setup, be that console or PC. The AOC C3583FQ gaming monitor is a 35″ ultrawide, curved display with a resolution of 2560 x 1080 and Freesync. Let’s take a look. We don’t cover all that many monitors here, but we all use them all the time don’t we? Whether that be dual or triple monitor setups, or QHD touch screen panels on Ultrabooks, the display is the immersion gateway to our content and it’s imperative that it’s of a good quality. Thankfully most are at least sufficient in 2016, so where does the AOC C3583FQ come in on that spectrum.

First of all, the unboxing. There’s actually a little to talk about here.

So, a plethora of connectivity options available here on this unit and AOC saw fit to include the relevant cables for this. As silly as this sounds, not all monitors I’ve had in the past have included such necessities.

Aesthetically this is a rather strange unit. Not ugly, just strange. The combination of glossy plastic, relatively small bezels for the size of the unit, and a brushed plastic-coated base mean that there is something of an identity crisis going on here. Again, not ugly, just weird.

Continuing with the base, it covers approximately a third of the unit, proudly centred, and houses the I/O for the unit. That I/O consists of a DVI, VGA and power input, along with two DisplayPort inputs and two HDMI inputs, with one MHL compatible so you can hook up a smartphone if desired. It’s nice to see VGA still there as there is still an alarming number of devices that utilise that connection. There’s also audio jacks for the embedded 5w speakers to output. When you do go to hook this unit up to your machine (we tested with a PC, so we’ll be leaning that way in this review) there are some considerations. Running this on our Core i5 3570K rig with a GTX 970, we had to hook up via DisplayPort to hit 160Hz due to HDMI’s limit. Once connected with DP, there was no issue getting up to that refresh though. HDMI, DVI and VGA are still options however depending on your console/PC of choice.

The metallic arm holding the panel and housing the connections through to it is a bit of a disappointment. There is no height adjustment, or pivot, with only tilting capabilities, and not a huge amount of that either. It doesn’t need much but it would be nice to see at least a height adjustment. Those used to having monitors at a particular height are either going to have to get lucky, or find a few large books to support the AOC C3583FQ. Let’s briefly cover the audio on this unit. The integrated 5w speakers are acceptable for the size of screen. They might not deliver the sort of surround sound most would like, with rumbling bass and rising mids, but it does a job if you have no other means of audio output. The one downside for immersion is that these are backwards facing speakers. We’re not suggesting that they could be on the front, aesthetically, but rear facing speakers are never going to give the level of sound most might look for when gaming. We’d suggest that if you’re investing in this, you might also look at some other 2:1 stereo speakers with a sub. Why not go the whole hog! Oh yes, there’s that curve as well isn’t there. It is some curve as well. I’d be lying if I said that the curve would be a selling point for me normally, but it does play a bit of a part in the immersion factor with some games, first person shooters specifically. That curve is presumably one of the major reasons there is no VESA mount here. One can only speculate but that is a serious deal breaker for many looking to drop cash on a gaming monitor of this ilk. VESA mounts should be a required feature on all monitors in my opinion.

Going back to the base, the OSD menus are controlled entirely by the capacitive buttons on that base unit, and they aren’t too bad. There were a number of phantom touches registered throughout the review period, but that’s not a black mark against the AOC C3583FQ alone; many monitors suffer from this.

The menu itself is adequate without being outstanding. Standard options such as contrast, brightness, gamma and shadow control are all evident and are easily altered to get the best deep blacks that this MVA LCD screen can offer. As an aside, the contrast on this unit is very good, and doesn’t need much fiddling with. There are additional colour options including an sRGB mode for those looking for a more nuanced reproduction of colour. I had no real need to frequent the menu after the initial setup. Using the AOC C3583FQ daily is, well, different to most other monitors. It’s 35″ of ultrawide display with a 21:9 aspect ratio is all great. However it’s still only a 1080p display meaning that ppi is rather lacking, at just over 79 ppi. It does throw in some niceties however, with Freesync support to eliminate image tearing and stuttering but there’s just no getting away from the resolution on a unit this large. I was used to using dual Dell S2415H monitors which run at 1920 x 1080 with a much more palatable 91 ppi, and truth be told, I welcomed going back to them from a productivity standpoint.

On that note, productivity work on this unit is somewhat of a damp squib. Whilst the unit does come with some software that allows the sectioning of the display, it’s sporadic in it’s ability to function correctly and even without that, the Windows OS does look a little blown out and warped. Usable, but only for the real estate, not for the clarity.Switching to sRGB mode does help a bit, but a particular bug bear of mine is the fact AOC opt to disable the brightness control once this mode is activated. Not ideal, and I’m not a fan of monitors that deploy this method of control.

Once the unit has been fiddled with a little, mostly with Gamma adjusted to bring back some colour depth to the unit, gaming is a slightly different story. Being close to the unit, sitting on a desk, FPS gaming is fun and immersive. The picture is still evidently not what you’d call sharp however, and whilst it should be good enough for most people, it’s not the sort of picture you’d want from a unit costing what this does. That sits squarely with the 1080p resolution, and after a fair amount of time testing this, I really can’t come to any other conclusion other than at this size, the resolution is not quite adequate.

When watching movies, and the majority of them being in a 16:9 aspect ratio, the vertical black bars can be a little annoying and distract from the overall enjoyment of the content. However, get native 21:9 content and it’s a dream. No black bars in sight and it’s lovely to behold. Not the crispest as I’ve mentioned previously, but experiencing content that spans almost your entire field of view is glorious. One final note is the stability of the unit. It’s very hefty, so it’s not going to rock and fall of your desk, however as there is only a small arm from the base to the display, any slight knock on the desk on which it’s sitting results in a side-to-side seesaw effect that can sometimes take upwards of 5 seconds to settle again. On a device priced as this is, and aimed at the market this is, we’d expect a sturdier mount for a 35″ display. Could do better reads the report card in that particular instance.

My time with the AOC C3583FQ was fairly mixed. The sheer size of the unit meant that lining up a number of documents to work on (I work from home a lot) was easy and almost as acceptable as using multiple monitors to me. Almost, but not quite. The resolution was clearly noticeable in the Windows OS and scaling the icons up resulted in the low ppi numbers being even more evident. Gaming and video consumption was a slightly different story though. Blacks were adequate mostly with some instances resulting in very deep blacks that were pleasing. In daylight, the maximum brightness of around 330 nits was more than adequate for viewing, and the RGB mode offered up some nice reproduction in game. Additionally the inclusion of Freesynbc, whilst nice to have is somewhat limited in terms of what it can do on a 160Hz display, which handles stutter well anyway.

Ultimately the resolution on a 35″ display needs to be in excess of the 2560 x 1080 on offer here to truly make this a powerhouse of the curved ultrawide monitor market. With the C3583FQ, AOC sought to deliver a beast of a unit (tick) with a fast response time (tick), good colour reproduction (okay, it can get there, so tick), and crisp and clean images (hmmm). They deliver on most, but not all.

The overriding thought I’m left with after my time with the AOC C3583FQ is that if you have the cash, and you’ve after a monitor purely for gaming, and 1080p is acceptable to you, okay, go for it. If, like me, you’re looking for an all rounder and require a monitor for productivity as well as leisure, this monitor makes almost too many compromises to be a consideration. 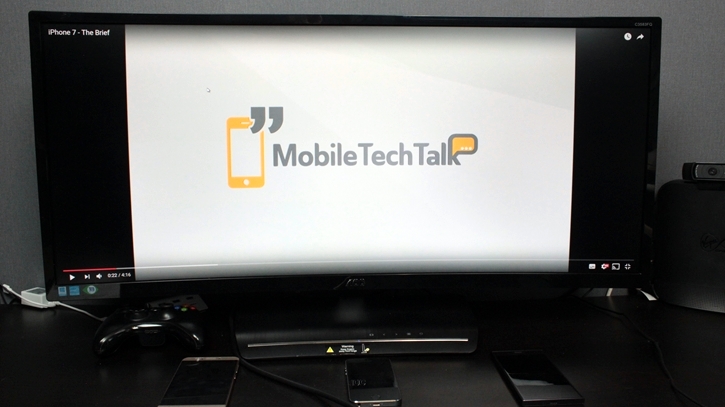